I have been to Walt Disney World seven times, starting in 1993 when I was eight years old. My last visit was last Thanksgiving, at 32. With each vacation, I experienced Disney’s commitment to embracing technology as a means of personalizing and enriching the guest’s experience in all aspects of their interactions in the parks. That is, unless you are a woman having your period. For you, the magic stops at the restroom doorway.

Doing a bit of menstruation math, I visited Cinderella’s Castle more times with my period (six) than without (one). In line I kept asking myself why, despite profound technological advancements, having your period in Disney World was no different in 2017 than it was in 1993? If Disney’s currency is imagination, then I challenge Imagineers to create a world where talking animals can be adventure sidekicks and where women’s periods can be a little more magical (and meaningful) in their parks, and perhaps, even raise the standard elsewhere. 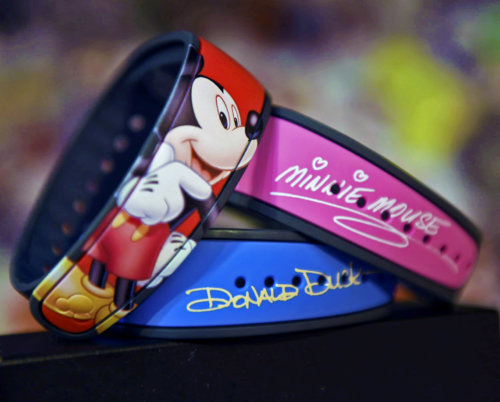 In the summer of 2013, WDW launched their revolutionary MagicBand system and MyMagic+ app.  All the resorts, parks, rides, stores and checkout counters became equipped with wireless sensors called touch points. You tap your MagicBand to the sensor and your transaction is seamlessly complete. The wristband is equipped with a Radio Frequency identification chip that constantly streams data throughout the system. Synced to your MyMagic app, the system grants guests unprecedented control and effortless interactions. MagicBands are your park tickets, room key, Fastpass, reservation maker, and very important, your credit card.

But standing in line at Space Mountain, with my period, I began to ask myself: If I can MagicBand for a turkey leg, why can’t I MagicBand a tampon? 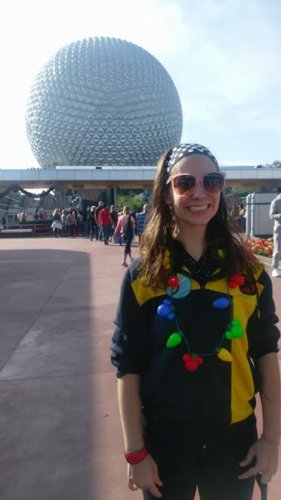 Courtney at Epcot, wearing her MagicBand in 2017.

If every immersive wait line for a ride, hidden Mickey, character inspired dessert, and themed merchandise is an intentional choice by Disney to shape the guest experience, the absence of intention is equally as powerful. Having your period while on vacation is an experience for many women. Thousands of women visit Disney World daily and cannot wish upon a star to put their periods on pause. Even though it would be great for our periods to take a vacation while we deal with the heat and humidity, walking to rides and standing in line for hours at a time. Disney World invested an estimated one billion dollars to implement their magical system and yet, Imagineers did not–or could not–imagine putting MagicBand technology in the women’s restrooms.

I do not have a definitive answer.

It appears the original exploratory group who ultimately stewarded the era of MagicBand in Disney World, was comprised of five men. The man squad, known as the “fab five,” were a senior level team pulled from operations, technology, and innovators long established in the company. Research suggests they were directed by then President of Walt Disney Parks & Resort Operations, Meg Crofton, however it appears she did not have direct creative input. If she had, we may have seen sensors for women’s menstrual health much sooner. The Disney World Communications team was contacted about the MagicBand team and the current plans for the rest rooms; however they did not respond to any inquiries.

By my count, there are approximately 53 women’s restrooms throughout Disney World’s four major parks and two water parks. I’ve frequented many of them with my period. Every time I checked the walls. I found only old quarter-style tampon and Kotex vending machines lodged in the walls. Same ones from 1993, I’m sure.

But MagicBands are the park’s new currency. We are encouraged to leave our wallets back in our hotel rooms. Guests aren’t carrying quarters or even cash anymore. Who needs bags when you can MagicBand a purchase and have it delivered to your room? I am usually not carrying tampons with me. I could ask other women in there if they could spare an extra, but they do not have any either. If I buy an entire box at a merchandise counter, I am stuck carrying it around all day when I may only need one. Guess I should start hiding quarters in my bra for emergencies…which means I need to start wearing bras again. 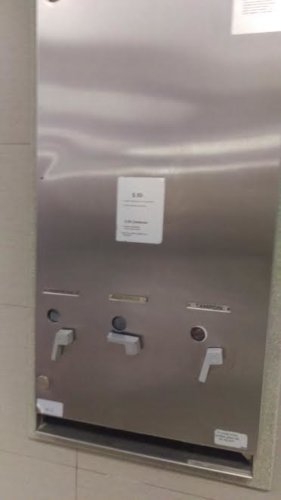 But if you know your period is coming on vacation with you? You could take a bag and carry around Kotex. Though that defeats the purpose of the MagicBand’s hands-free approach altogether.

What about pockets? Princess dresses and women’s clothing often have one thing in common: no pockets! Let’s revisit period math. You get to the parks between 8 a.m. and 9 a.m. and stay until closing at 9 p.m. To keep it fresh for 12 hours, you need four or five tampons. That is a forest of tampons sticking out of the one pocket you may be lucky to have, and you’ll need to constantly rearrange for rides and comfort.

Thinking about carrying quarters to use the vending machines instead? Make sure to hit the bank up before vacation to get a roll, since four tampons is $2 a day weighing your pockets down.

While I may not live to see a Disney Princess excuse herself from the ball to change her tampon, I am determined to see Disney World acknowledge the period reality. Imagineers can positively transform women’s Disney periods with the wave of their fairy godmother wand. Or, in this case, the tap of their MagicBand.

The intention of the system is to remove pain points that guests might encounter during their vacation. Disney World, this is a pain point. If you really want to make dreams come true, let’s make sure women can MagicBand turkey legs and tampons. That would be genuinely magical.