In her TEDTalk, Brene Brown shares that the meaning of life can be found in one’s willingness to be vulnerable, emotionally exposed, willing to take risks without knowing whether failure or success might meet you. I know the power of vulnerability – and its connection to finding fulfillment – intimately.

In certain moments, embracing vulnerability was the only path to survival for Persian Jewish families fleeing the radical fundamentalist coup led by Shia revolutionary Ayatollah Khomeini. My family members describe that time as simply inconceivable, as the certainly-imperfect but more or less pluralistic democracy of Iran became the Islamic Republic of Iran, ruled with an iron fist under strict Islamic law imposed by the country’s first supreme leader. For a sizeable population of Persian Jews, the future in Iran was bleak – stay in a country you love, living permanently in fear of persecution, or find a way out, seeking refuge (and hopefully, equality) in unknown lands. Droves of Jews escaped; many – including my own parents – were smuggled out. And many were encouraged by the weather, opportunity, and family who preceded them to move to sunny Los Angeles. The diverse residents of Tehran, Shiraz and the like flourished in the City of Angels, especially in neighborhoods like Westwood and Beverly Hills, giving rise to the term Tehrangeles.

I feel that my Persian culture mixed with my Jewish faith creates one of the most beautiful combinations of identity possible. A richly diverse and historic community (see: the biblical Book of Esther, which tells the story of the Jewish holiday of Purim, set in Persia) inevitably centered around family, food and faith, that has managed to maintain traditions in the most beautiful of ways. Even at 30 years old, I hesitate to make plans on a Friday night without checking in with my Maman Joon (Joon equates to dear in Farsi) first, understanding that the sacred space of Shabbat is reserved for family time, no matter what the circumstances. Persian Jews are also intricately interwoven – everyone is somehow related, and you can safely bet someone on the other side of town has their opinions on the way you live your life. The challenge for young adults like myself – first-generation Americans, often maneuvering around our parents’ conservative and traditional values – becomes preserving the history, richness, and beauty of their customs, while paving our own paths to meaning and authenticity.

Growing up as a Persian Jewish gay kid – the first generation of our family to grow up in America – it didn’t feel like I would ever find my place. I remember looking around, and praying, “G-d just give me ONE, just one gay Persian man that I can look at and see the possibility for my own future. Give me one person who can show me that I don’t have to choose between my family and my identity, who shows me I can be gay, and be out, but still be embedded in family and bound to my roots, culturally, religiously, and communally.” But there was nobody. At one point in my adolescence I remember thinking, I don’t know if I’ll ever come out.

Many closeted LGBTQ+ people become their own life coach or therapist; until that sacred moment when you break the seal of secrecy and say, “This is who I am,” the only person who knows your secret is you. As a 20-year-old student of psychology at UC San Diego, I began to coach myself: “You’re not a liar, you’re not deceitful, and you’re not inauthentic. You’re simply not sharing a part of you that you’re not ready to share yet.” And that – paired with my generally positive and optimistic disposition – did really provide some comfort. I remember resolving that at 30 years old (which I considered the magical number of adulthood then), I’m going to come out of the closet, I’m going to be financially, emotionally, mentally stable enough to withstand whatever might come my way. I will come out, but this has to wait. And for a sizeable portion of my life, it waited.

At 22, I was spending quality time with an AEPi fraternity brother in the most Persian of ways – going out for tea and sweets after dinner. After hours of deep and genuine conversation, we were soon to wrap up the night when we decided to take a walk around the block. I knew in my heart there was so much more left to say. We sat in the grass and I could sense the tenseness – he was nervous, his voice was hesitant, and he was rubbing his hands because his palms were sweaty. That night, my Persian Jewish brother came out to me; and in that moment, my resolution to wait until I was 30 to publicly live my truth came crumbling down in front of me. His vulnerability and his trust in me showed me that I couldn’t set a date and wait, and that beyond this, there were surely more of us in the exact same situation. I had to take steps, starting now. As Ryan shared, I prepared myself for the “me too” that came soon thereafter, rewarding his honesty by sharing my inner truth for the first time ever. Needless to say, the weight lifted from each of our shoulders had us soaring through the early morning.

So for the next seven years, I came out to some of my closest friends and family, and even some strangers who accepted me without any questions because that was the only me they knew. But in LA, I was still living a double life: out of the closet for a year in Israel, back in the closet when I got back to LA; out of the closet in DC (I even did some LGTBQ+ organizing for Hillel), returning to LA, and right back in again.

In Spring 2015, I decided to come out to my parents. I had struggled with the decision intensely: for young Persian Jews, our parents are often our entire world, and we are theirs. But I knew that once they accepted it, I would be able to move forward in every important way. It was Passover and our family had a picnic in Pepperdine Park where we enjoyed hilarious quality time. After lunch, with my brother and sister poised to support me, I began to share my thoughts, emotions, and fears. One can never anticipate the catharsis of releasing so much baggage, held for well over 15 years – the relief of dropping all veils for the sake of raw genuine vulnerability, and I don’t know that any of us could have been prepared for it either. Within minutes, the five of us were crying (mostly tears of relief and joy) and my mother and I were embracing. It was special and spiritual – the first time in my life that the people I care about most deeply were hearing my whole voice at once, and it meant everything.

Coming out to my family was crucial and their acceptance meant the world to me. But I knew that was only the beginning of my journey. Only two weeks after dropping this news on my parents, I told my mother that, now that I was out, I needed to be really loud about my identity. I was respectful and patient enough to give them the time they needed to adjust. But other people were suffering in silence; I needed to help them: it was one of my life’s missions to do so. She said she understood, and that day I started to plan.

A day after National Coming Out Day in November of 2015, I got vulnerable, sharing my true self with a perfectly millennial click-and-post: a coming-out video stating that I am Persian, Jewish, gay, and proud, offering my support for others that may need it, and calling on allies of the LGBTQ+ community to raise their voices in support of equality. The feedback was emotional and awesome. Family and friends from all over the world chimed in with words of support, solidarity, and celebration, and soon the video was accumulating thousands of views, likes, and comments.

But infinitely more important than the public buzz was what happened behind the scenes that day, and every week since: other people – often Persians but not always – reaching out to share their own stories, struggles, and journeys and honoring me with the opportunity to help them. To have become the role model that I sought as a young child, and to have the opportunity to positively impact others, their families, and our larger community was more than I could have ever dreamt of.

The past year has been the most transformative of my life. I have taken on a full-time role as the Assistant Director of JQ International, a non-profit organization which builds and strengthens a community that nurtures the healthy fusion of LGBTQ+ and Jewish identities.  I’ve been able to become the LGBTQ+ activist, advocate, and community organizer that I once only dreamt of being. But that wouldn’t have been enough, if I couldn’t have been a proud Jew and Jewish leader too.

So my message this Pride month is quite simple: embrace vulnerability toward living a more meaningful and fulfilled life. In the process, you’ll encourage the same from others and cultivate a more honest sense of community for you and everyone around you. 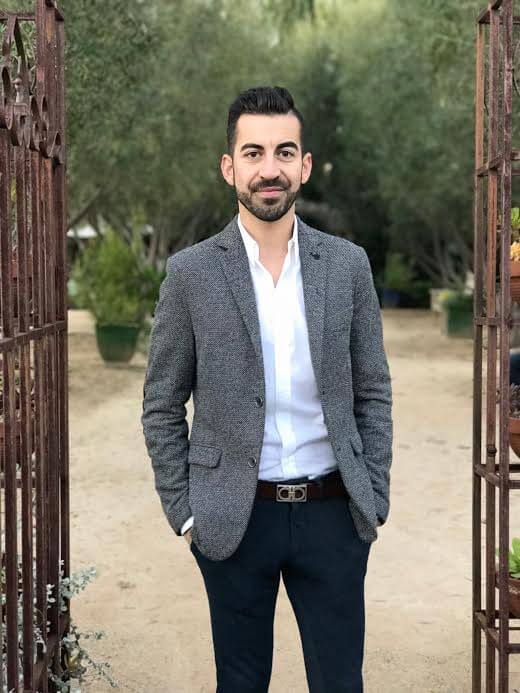 Arya Marvazy is a first-generation American, born to Iranian-Jewish parents in what has been affectionately referred to as “Tehran-geles,” CA. Arya earned his B.A. in Psychology from UC San Diego and M.A. in Organizational Behavior from New York University. He has spent the majority of his career within the non-profit Jewish communal sector and is involved in a variety of organizations including JDC Entwine, The Jewish Federation of Los Angeles, Masa Israel Journey, and 30 Years After. He has always been passionate about LGBTQ+ equality, education, and advocacy work and helped to create the Keshet-Hillel Guide for Inclusivity for professionals and student leaders well before having come out of the closet himself. Most recently Arya has been working to expand LGBTQ advocacy work within the Persian community in Los Angeles as the Assistant Director at JQ International. His passions include travel, exploring foreign cultures, and languages of which he speaks four.