This is the first post in a series of articles by Mayim about her divorce. For all the posts, click here.

I was raised in a traditional Jewish household attending a Reform synagogue. My mother was raised Orthodox but left traditional Judaism pretty much as soon as she could.

When we lit Shabbat candles, my mother covered her head with a doily and I had a matching one so I could be like her.

My mom’s older sister was very religious, so she and all of her daughters covered their heads all the time in tichels (headscarves), hats, and, for special occasions, fancy wigs. To me, head coverings were for super religious people. I had no problem wearing a small kippah sometimes when making blessings as a child, and one of my cousins in Israel even crocheted me one with my name on it (which I treasured and still have). I saw nothing strange about women wearing kippahs, since in Reform and Conservative circles, it was acceptable. Why not? 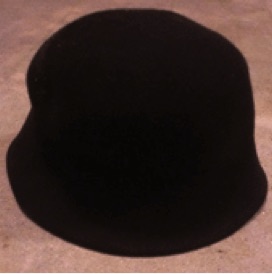 When I started taking on more observance in college, the notion of religious women’s head coverings scared me. It signified a big step, a public declaration of religiousness that I was scared to embrace, especially since I didn’t have religious friends and my boyfriend (who later became my husband) wasn’t at that level of religiousness. I had taken on observing Shabbat and kashrut, and I knew that something about head coverings attracted me. I liked the notion of a shift in identity when one got married. I liked the fun choices of hats (as long as they weren’t adorned with Blossom-like sunflowers). I liked the notion of identifying as a religious woman. But I wasn’t “that” religious, and my marriage, although very traditional, did not follow the classic trajectory of Orthodoxy.

Before my wedding, I traveled to visit my family in Israel. My aunt took me to a fancy milliner in Jerusalem where I bought four hats: a simple black one, a “sexier” red one, a wide-brimmed navy one with a velvet stretch of fabric around the rim, and a cream-colored one. I loved my hats and could not wait to go to synagogue wearing them once I was married.

My collection of tichels

The week after the wedding, we celebrated seven nights of blessings where the “Sheva Brachot” are recited, and I happily wore small bandannas or kerchiefs for those dinners. It felt right to acknowledge that I was married, but I made sure not to look “too” religious, since my parents and husband might have started to worry that I was becoming a religious fanatic.

As my marriage proceeded, I wore hats or tichels when in synagogue or when I was anywhere men might cover their heads: weddings, in Jewish meetings at Hillel, and the like. I became a skilled tichel-tie-er. I owned a dozen in different colors and even added to my hat collection a few “funky” crocheted hats. I loved covering my head. 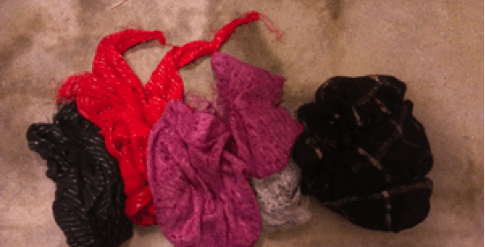 The first time I prayed after the divorce, I assumed I would not cover my head. But I couldn’t bring myself to bare my head. As I prepared to recite the blessings over the candles and wine and challah at the Shabbat table, I knew I had to cover my head. I had been doing it since I was a child. And as a married woman I continued that. My growth in Judaism had led to a profound respect for the learned men who cover their heads in reverence to God. It felt wrong to not cover my head. I felt naked. I couldn’t do it. I cried as I tied my tichel. I thought, “Why am I doing this? I’m not married anymore. This is stupid. Maybe I’m not ready to move on?” But I couldn’t not do it.

I see covering my head as a sign of honoring God and honoring my place in God’s world. I know I’m not married. I know it every second of every day. I also know that I love that traditional Judaism has given me a wonderful way to transition from the kippahs of my youth to the recognized female head covering of our religious tradition, which I love.

I feel strange when people who know I am divorced see me with a covered head; they must wonder what my deal is. I’m not “that” religious to need to cover it all the time, so why not discard it now? I don’t know. I can’t. Not today. Not with everything I’ve been through.

I have traveled a long way to find God and to feel connected to God with every fibre of my being. It started when I stood at Sinai and saw the sounds, I guess. I wandered a long time to get here. I love where I am: divorced, conflicted, respectful, hopeful and reverent. And scared.

I may stop covering my head at some point, but I don’t see that day coming any time soon. Covering my head is a part of my journey that I don’t want to leave behind. Not now. Not after I’ve traveled so far to get here. No way.

A version of this post previously appeared on Mayim’s blog on Kveller.com, June 4, 2013.