Now that The Big Bang Theory is officially over, I’m beginning the phase of my life which will be collectively referred to as “Life after The Big Bang Theory.” Here are some of the highlights of the week after we filmed the finale.

We became the first TV cast to have our handprints set in cement at the Chinese Theater on Hollywood Boulevard. Next to meeting Bob Dylan and burying my father, this was one of the top surreal moments in my life that I will never forget. I still don’t think it has fully sunk in, honestly, and maybe it never really will. It was a fun experience all around. I didn’t tell my mom where or why she was coming with my sons and my ex-husband. I told her to prepare for an outing but that I was not saying anymore about. I told her to dress up, but I guess she didn’t hear that part, so she was upset with me when she finally found out what was going on and she was in khakis. But besides that minor upset, she was really excited that I surprised her with such a huge thing! Everyone in the cast had their family there, and they were all dressed pretty nice. On my end, my kids and their dad were in jeans, T-shirts, and baseball hats, and there was my mom in khakis and flats (when she would have liked to have worn a dress and heels), but it was really sweet. That’s my family and that’s how they’re comfortable! 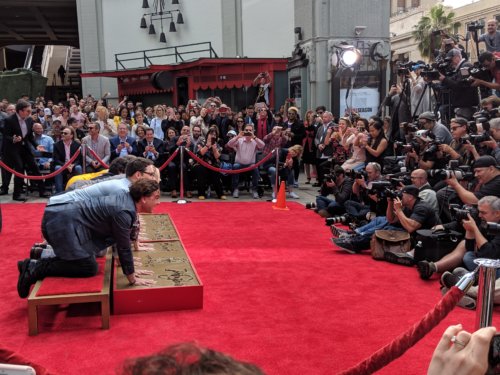 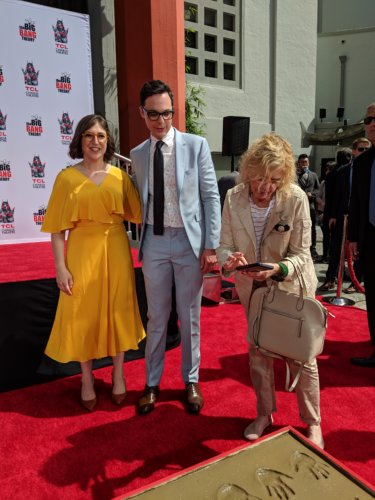 This is my mother proudly taking a photo of my handprints, while Jim and I are clearly trying to have our photo taken 🙂

We had a cast, crew, and production staff wrap party at a beautiful hotel in Pasadena, the city where our show is set. Representatives from CBS and Warner Brothers were there, as well as everyone who has ever worked on our show, including tons of guest cast members, and even producers and writers who had moved on to other jobs. It was really big and loud and hectic, and I was feeling so overwhelmed emotionally that I didn’t stay too long. But it was still really lovely. I got home, took off my makeup, got into a robe, and went to work on the puzzle I’ve been deep into lately: Alice in Wonderland as painted by Thomas Kincaide. Aw, yeah! About an hour later, my three-year-old cat, Shadow, started making horrendous, scary growling noises and rolling on the floor hissing and attempting to groom his private parts which were spasming. He was in a lot of pain, and by then it was 11:15 at night, and I was alone and very certain that he had to go to the emergency room. Fortunately, there is a clinic not far from my house, so off we went to the vet. Turns out he has a recurrent urinary blockage situation which he may need surgery for. I had to leave Shadow at the vet for several nights, and I was one worried mama. So that was night one post The Big Bang Theory! 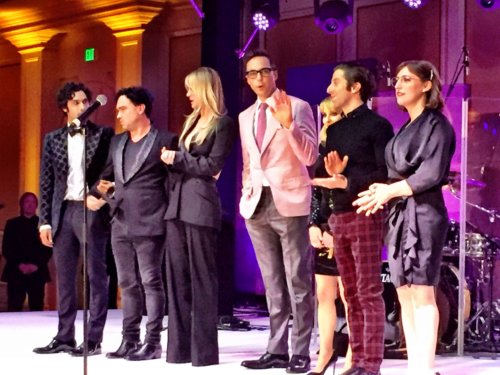 I did a lot of mom stuff. Whenever people on set or in press interviews would ask me what I was going to do right when the show ends, I would respond, “Be a full-time mom.” Indeed, my sons and I spent a long weekend in the Dominican Republic at the Nickelodeon Resort, which is exactly what it sounds like. The Dominican Republic is a beautiful country with tremendous history and culture. I speak Spanish and got terrific practice while there! My Mexican Spanish-trained tongue did okay in the Dominican Republic, save for some slang I wasn’t familiar with. I napped a lot, my sons swam in the pool, and we all swam together in the beautiful Caribbean Ocean, which is warm, calm, and free of pollution as far as we could see. 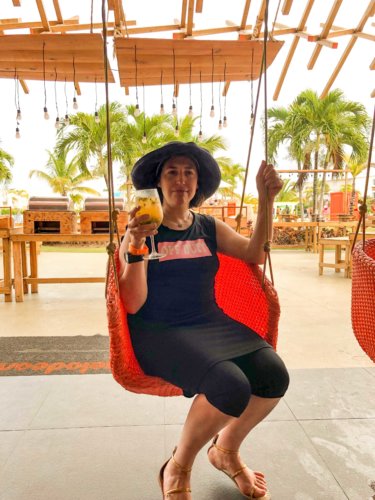 My “Off Duty” shirt seemed quite appropriate.

We returned home to a full-on mom schedule for the ages. My sons’ father had the opportunity to go to Japan with his best friend, and he left a few days after The Big Bang Theory ended while we were away on our trip. So, we landed at midnight and got up at 7 AM to start the last week of my sons’ homeschool classes. Homeschooling is not what you think…we are rarely home, and our days entail a lot of driving to the two homeschool centers my boys take classes at, as well as park days, book clubs, Shakespeare classes, and Taekwondo. The dichotomy of my life is not lost on me: the polarity of working on a sitcom where food is catered, and I have relatively few places to be aside from in my dressing room or on set. As a mom, this first week after my job ended, I was constantly on a clock. Constantly potentially late. Constantly disappointing one or both of my sons with the wrong sandwich bread, the wrong size carrots, the wrong planning for which freeway to take…name it and I likely got it wrong.

What I can say is that over the last few days and weeks, post The Big Bang Theory, I also got some stuff right. I’m the only mom these kids have. I am doing my best and that’s always right even when it feels or seems wrong. There’s a lot of places I’d rather be—napping on the beach in The Dominican Republic for example—but there’s no job I would want more than the one I’m doing right now. Just being the mom I’ve always been to my sons who love me, even when I get it all wrong.