I hope everyone had a nice Mother’s Day. Some people don’t like made up holidays, others do. Some years I’ve liked Mother’s Day, some years I’ve wished it would go away… or that I could. Being a mom is full of ups and downs, and while it is a blessing, it’s also overwhelming a lot of the time. And, others’ expectations about Mother’s Day can sometimes feel like an invitation for being disappointed. Suffice it to say, I avoided thinking too much about it by hosting my mom and a few friends for brunch on Sunday.
I won’t list who came because that’s weird. And it was very nice, but not in a celebrity way, just in a normal group of moms kind of way (and some spouses, and lots of kids all trying to pet my cats at once). Thankfully, Shadow kitty loves being loved, and he loved this brunch and thinks we should do it more often.
I want to share the things we ate, along with links to the recipes in case you want to host a similar brunch. That’s kind of fun, maybe? Also, everything was vegan and gluten-free and it was still delicious. So, hush! I put a bunch of snack type things out like dates, pumpkin seeds, and crunchy garbanzo beans (which no one likes but me). Now on to the good stuff:

Salty. Fatty. Kind of trashy. Delicious. I use a standard store-bought mix and I add a 50/50 combo of vegan mayo and vegan sour cream. Not healthy. Not caring. Delightful. We had raw veggies and crackers for those of the guests who didn’t want to do what I did, which is eat it by the spoonful. Whatever. No one said I was classy. Recipe in this post. 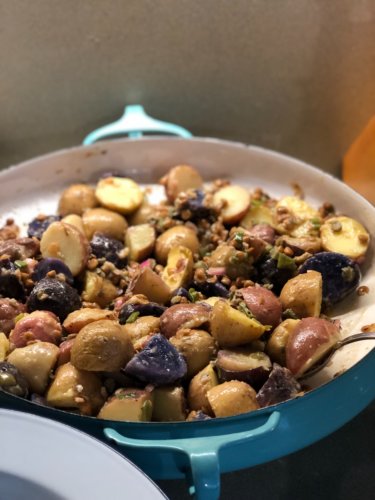 I made a “grown up” potato salad. By “grown up,” I mean it doesn’t include mayo. This recipe (Tip: I use a can of lentils and don’t feel like less of a cook because of that) calls for little potatoes halved (or big potatoes cut into 1/2 inch pieces) with lentils and a red wine vinegar/mustard vinaigrette which involves some cornichons (tiny pickles!) and capers (oooh salty!) diced up with scallions and garlic. It’s not too heavy of a dish, and it looks so pretty, especially if you use multi-colored potatoes, which I found this year. 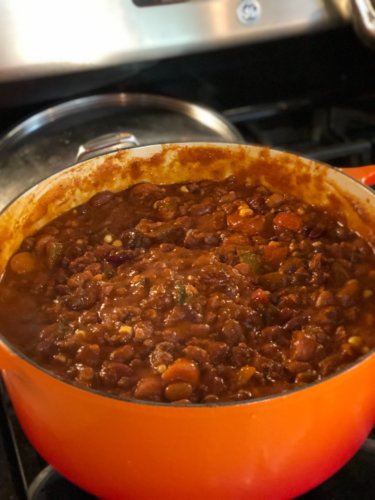 I made my vegan chili from my cookbook, Mayim’s Vegan Table. This year, I threw in some soy chorizo and a few vegan burgers in addition to the standard kidney, black, and pinto beans, and veggies. It is easy to make, can be made ahead of time, and freezes well. It’s the perfect party food. Plus, it’s high in the protein non-vegans are obsessed with us vegans getting. 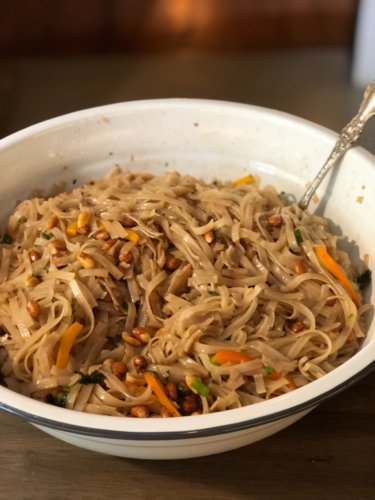 I made way too much food, and the Thai pasta suffered greatly. Based on my Tante (Aunt) Linda’s recipe, it’s easy to make gluten-free if you want to (I used rice noodles), you can add vegetables or not, and it can be served room temp which is very important for parties, I think. I made mine with sliced orange bell pepper because it looks so pretty, Spanish peanuts (the kind with the skins on them), scallions, and the magic combination of sesame oil, soy sauce, and agave which makes this a hit with small people in particular. You can also find this recipe in my cookbook. 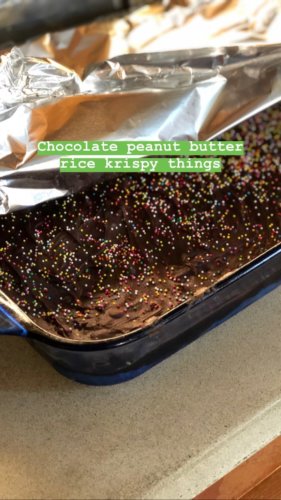 Yes, this is a picture from my Instagram Story.
Basically, crack. I made crack and fed it to young and old alike. Got ’em all hooked. Seriously though. Simple recipe. Too simple really. Because you’ll want to make them daily.
Shout out to those who brought salad, a chickpea frittata (wow), and vegan lemon bars (Avram, you rock hard!), as well as those who brought Prosecco, fruit punch, and lemonade.
And just to round out this LA brunch, my sons and I hosted a raffle of 6 swag items we had in our house that needed new homes. We sold $3 raffle tickets to benefit a battered women’s shelter that our local Jewish Family Service runs. We raised $80 and everyone got a prize. It felt really nice to have all of us do something good together on this day of fun and festivities. 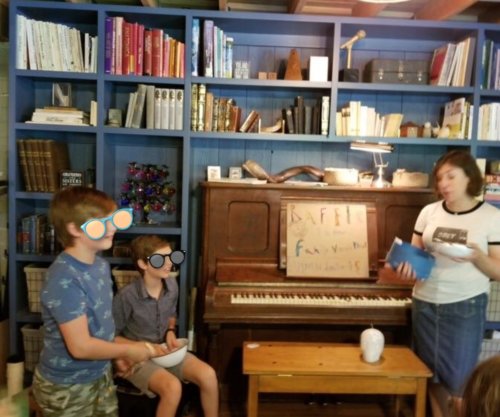 Blurry picture of our auction. Very official.
Happy Day of Mothers and mothering in all of the forms it takes. And thank you to those of you who send love to single and divorced moms. I appreciate it, and I know my sisters-in-singlehood do too.
SHARE:

Read More From Mayim
Explore These Topics: Food and Drinks Mother's Day Recipes
More Like This: