So many people—including my mom—have asked what I am working on now that The Big Bang Theory is over. While there is a lot of work stuff I can’t go into detail about because it’s still pending approval and there are legal contracts which I can get in trouble over if I talk about things too soon, I can share some general tidbits about things I’m interested in working on which will hopefully whet your appetite. I’m talking to you, Ma.

As much as I love drama, and think I do a fine job as a dramatic actress, you can probably bet that I’ll end up in the comedy sphere if I have the opportunity to do another TV show in the next few years. I don’t have anything actively in the works, so I’m truly not trying to be a tease, but I literally have been told by the people who rep me that comedy will likely be the space I’ll end up in. So there you go.

I would LOVE to be in a movie. Many actors would love to, but it’s harder than you’d imagine making that transition. Jim Parsons has done it gracefully, and that’s well earned and admirable. I don’t know if that’s going to be my path. I hope one day it is. I gravitate towards quirky and deep stuff, and there are many directors out there who might be interested in me. It’s a matter of getting in front of those directors and writers and casting agents. And as much as being on the #1 TV comedy in America is exciting and amazing, to many in the film industry it’s a very separate set of accomplishments from those required for film, and those credits don’t always translate effortlessly into “let’s put you in a movie!” Time will tell, I suppose.

I wrote and plan to direct a screenplay (which would be an “indie” in terms of budget and scope). It’s based on a conglomeration of family experiences and it’s pretty heavy and emotional, plus I wrote it after my father (z”l) passed away. I have never imagined directing something like this, but after writing it, I can’t wait. I wrote the screenplay based on the images I saw in my mind. I envisioned it and brought it to life. I now can’t imagine not directing it. I directed a 15-minute short film during our last winter break from The Big Bang Theory, and it was my first experience directing in preparation for (hopefully!) eventually directing this full-length feature. I shot it in actual 35 mm film and that was thrilling and so fulfilling. I lived, slept, breathed, and ate this short film, and fell in love with the crew and the way it all came together. I can’t wait to apply those skills to a full-length film and I hope that happens this year! 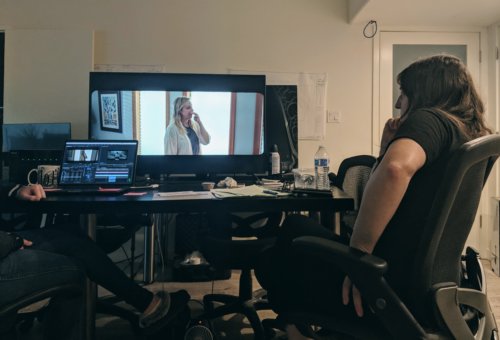 This is me sitting with my awesome editor taking a look at the short film. Don’t I look so serious and like I know what I’m doing?

As a person with “name recognition” in the sciences and in media, I am in a very fortunate position to try and bring some of my love of science to an audience that hasn’t experienced it yet. Namely, I hope to continue to explore science and young people in my creative ventures. In addition, there are a few projects I’ve been “attached to” with messages I believe in putting out there. Mental wellness, women’s issues, and empowering young women, in particular, are areas I gravitate towards in hopes I can help. I love working with strong women who want to tell compelling and moving stories. It would be a true pleasure to help other women get their work into the world in ways that can change people’s lives and perspectives. 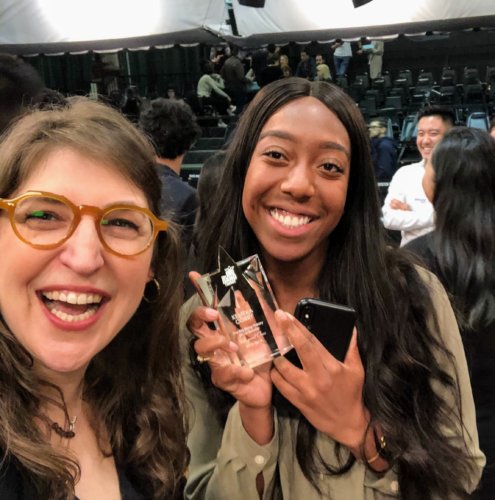 The other thing I am working on is me. Remember me? Sometimes I don’t. I’ve been a human DOING rather than a human BEING for a long time, and I am ready to focus more on my health and my inner world now that my main job—which took up so much of my brain and time—is over. As I get older, my body is less resilient. Losing sleep over stretches of time affects my immune system. Not keeping up with meditation is reflected in my mood and outlook on life; I am genetically prone to depressive episodes and high levels of anxiety and when I don’t take care of myself, I suffer. And those around me do as well. I’ve been writing more, getting more support from women who struggle with the things I struggle with, and spending more time alone doing things I enjoy. These are important things I now can make time to do. I don’t mean I’m going to the spa every day, but having a routine of exercise, preparing meals so I’m not constantly grabbing food on the go (which usually leads to less-than-healthy choices), and not packing 86 things into one day are ways I can give myself and my immune system a break. I know a lot of my friends are excited to see me and make plans again, and I want that, too. But I also need to be gentle with my re-entry into the real world and to take care of myself right now. 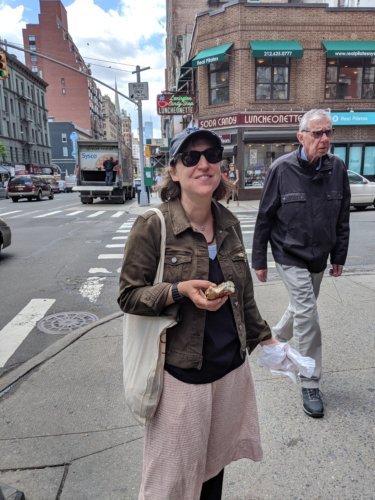 Me in my element in NYC, eating a bagel with tofu cream cheese. Happy.

My hope is that I can do all of this gracefully and with dignity. I don’t know if that will always be the case, but I will for sure do my best. And I am grateful to those closest to me who remind me when I’m not hitting the mark.