Our dog’s given name is Matzah Ball Norman Nathman. He also responds to Matz, Matzy, Mazteroni, Matzerella, Schmatz, Schmatzeleh, Smooshy pants, Pumpkin Peanut Butter, and Matz, Matz, Matz, Matz Matzeranne (that’s all one name, sung to The Beach Boy’s Barbara Ann), and once upon a time, Flapjack. I think the real measure of how much you love your pup has to do with how many names he has. By that measure, ours is clearly very loved. And I’m just happy he’s here to let us love him.

Growing up, I wasn’t raised in a dog family. We weren’t a cat family either. Besides a tank of fish that lasted a year at the most, we weren’t really a pet family, and that was just the way it was. But I knew that I always wanted a pet of my own (I don’t count the time I was 17 and snuck the most delightful little orange tabby cat into my closet. I was able to keep Spartacus for three days until my parents found out and had me rehome him).

Our first pet–or at least the first one I shared with my husband–was a cat named Chicken Noodle, and she wasn’t so much a choice as a good deed. Our neighbor had a handful of cats she needed to rehome and was unable to find a no-kill shelter for her favorite one, so the adorable 4-year-old kitty ended up with us “just for a few weeks.” 12 years later we had given her a good, loving home and are grateful for the years we had her in our lives.

Around a year after her death, we decided we were ready for a new pet, one that we would actively choose together.

My husband, son and I visited the local shelters, but there were never many dogs up for adoption, and the ones they did have just weren’t the right fit for our family. I did know, however, that I wanted to adopt rather than purchase a dog from a breeder or dog mill store. After all, around 6.5 million animals enter shelters every year, and 1.5 million of them end up being euthanized. We were committed to rescuing our next pet.

So we widened our search.

I started looking on PetFinder, expanding to the states around us to see which dogs popped up. By the time I found one that looked to be a good fit and got around to showing my husband and son, she was gone, scooped up by another family. We had a handful of similar false starts that reminded me not to get my heart so attached. We got as far as applying for one sweet puppy and were super sad when we weren’t chosen. 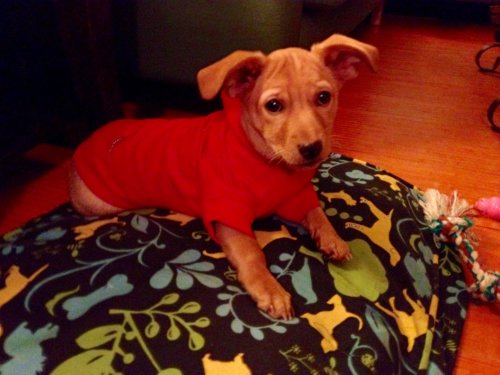 About two weeks after we got Flapjack/Matzah Ball

But then, there was Flapjack. He was an 8-week-old mutt that looked to be a mix between a dachshund and a hound. The few pictures there were of him showed a sweet looking puppy with floppy ears. It was enough to pull us in. Plus, his location stated he was in the next state over, so it wouldn’t be too much hassle to hopefully go and meet him.

Best laid plans and all, it wasn’t that simple.

RELATED: I gave up on New York because of my dogs

Unfortunately, I found Flapjack while my son and I were visiting my grandmother down in Florida, while my husband was back home in Massachusetts. To top it all off, Flapjack wasn’t in Connecticut as his profile insinuated. He was actually based in South Carolina, with the “potential” to make it up to Connecticut, according to his foster mom in our initial emails.

Having learned how quickly these puppies were adopted, I knew we had to act fast. There was no way any of us would be flying to South Carolina just to meet Flapjack, but thanks to modern technology, my son and I were able to Skype with the pup and his foster mom. We even recorded our conversation so my husband was able to watch it later that night. One reason we had wanted to check in visually was our worry that a smaller dog might be more yappy, something we hoped to avoid. 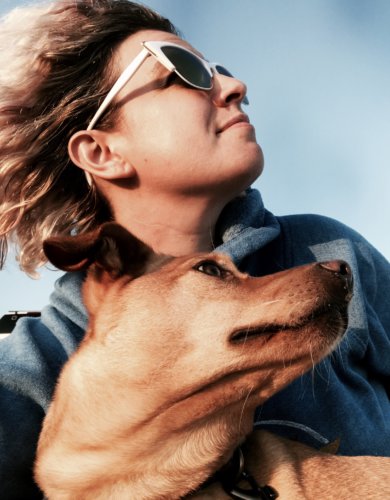 Avital and Matzah Ball take glamour shots on the beach

But when we finally made the call, there he was–an adorable sandy colored puppy, quiet as could be as he scampered in between his foster mom’s arms before finally settling down to rest in her lap. As he peacefully napped, and the 19 (!!) other rescue dogs (all boxers!!) barked rhythmically in the background, we heard his story.

He was born at an overcrowded shelter, and when his foster mom had gone to rescue yet another boxer, the staff asked if she would take this tiny pupper as well. He had kennel cough, they said. While it certainly isn’t deadly if treated properly, it does easily spread. And in an already overfilled kennel, easily communicable diseases need to be stopped immediately, even if that means putting down the sick dogs.

Thankfully, this kindhearted woman easily accepted our mini mutt along with her new boxer. She said with meds his cough was gone within a day, and he was a happy, well adjusted puppy.

After our video chat, where I had somehow restrained myself from reaching through the computer screen to cuddle the dog, I immediately sent the half hour file to my husband and demanded he watch it and tell me how much he had already fallen in love with this little guy. Thankfully, I hardly had to utter a word. Everyone was on board.

After about another week, our pup was placed in a van that winded its way through the southern states, picking up dogs from shelters with no non-killing policies, driving them up north to their forever homes. We eventually met Flapjack in a strip mall parking lot in CT, and it was love at first site.

A little over four years later and here we are, a family of five (another kitten from a local shelter ended up snuggling his way into our hearts as well about a year ago). Flapjack is now Matzah Ball–still named for something delicious, but it suits him much better. He’s an easygoing dog that is friendly to everyone, and has no trouble getting even the most curmudgeonly of people to get down on their knees to give him some loving pets. 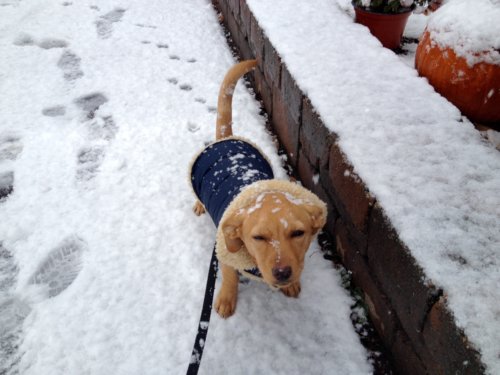 Matzah Ball’s first experience with snow. He was not amused.

October is adopt-a-shelter-dog month, and Matzah Ball and I want to encourage you to visit your local shelter if you’re thinking of getting a new pet. Many shelters are overpopulated and underfunded. Some even have policies that allow them to put down their animals because there is just no more space for them. Or they have a simple cough that could have been easily taken care of. If you’re considering bring a dog into your family, adopt, don’t shop!