As I get older, I find myself becoming more and more frugal. I already do small things like limiting myself to two squares of toilet paper when possible, reusing paper towels and tissues, and washing Ziploc bags for repeated use. But I wanted to save even more money, so I started doing things that I usually leave to a professional. Smart? Maybe not, but it sure is thrifty.

My dog was an expensive dog early in his life. (I need to preface this story with ADOPT—DON’T SHOP, but I was not very informed back then.) When I was just out of college, I saw an ad in the paper for Westie/Cairn terrier mixes, and I just had to get one. The man met me and my roommate in an abandoned parking lot with a puppy and told me a concerning story about how the mom of the puppies had just been eaten by the neighbor’s Rottweiler. Right then I knew I had to save this dog, even though he was looking kind of rough; his skin was dirty as if he needed a bath, but he was still the cutest dog I’d ever seen. I gave the man my $200.

I immediately named him Apollo (this was at the peak of my Battlestar Galactica obsession). Apollo, my roommate, and I drove straight to PetSmart to get a few puppy items. I’ll spare you the details, but on our way there, my roommate realized Apollo probably wasn’t very healthy. Luckily, PetSmart had a vet in the store who checked him out. It turns out Apollo had worms and mange (that wasn’t dirty skin). Due to this, Apollo was in and out of the vet quite a bit the first few weeks of his life and causing me to rack up the bills.

Luckily, Apollo is very healthy now and hasn’t had any major health concerns in six years. Now, aside from the occasional immunization cost, I mostly spend money on his groomings. He should probably go to the groomer every three months, but due to his cheap mom, it’s about every six months. His basic cuts cost upward of $50, excluding tip—and half the time they don’t look that great.

So after cutting my own hair with success, I turned the scissors on Apollo. I figured it’d be just as easy. Boy, was I in for a shock!

I already have dog nail clippers (which I never used), so all I had to invest in were the shears. I found a clipper kit for only $27 on Amazon. I was proud of myself for saving half the money from one grooming right from the start!

While waiting on the shears to arrive in the mail, I started on Apollo’s nails. I watched a couple Youtube videos to make sure I wouldn’t cut too deep into his black nails. I knew he didn’t like getting his nails clipped based on previous groomer’s reports, but I thought since I’m his mom, he wouldn’t mind. I pulled Apollo onto my lap, put his nail in the clippers and quickly clipped as he tried to pull away.

Apollo started yelping as if I had chopped off his entire foot. I checked his nail: It wasn’t bleeding, and the amount I took off was tinier than half a grain of rice. He ran away to hide under the couch, and I watched another Youtube video to ensure I was doing it properly. This video said a treat afterward could help with his stress. 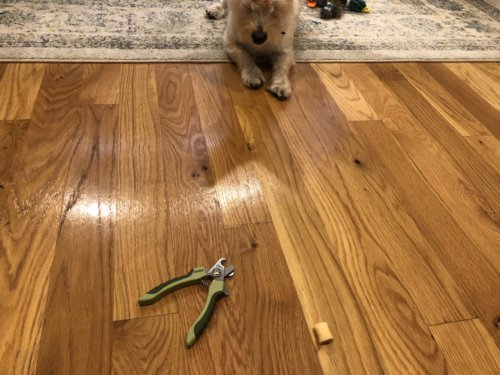 Not even a dog treat can make Apollo go near the nail clippers!

So I got him positioned again, but this time I had to wrap my legs around him so he wouldn’t run away. I clipped, the yelping was terrible, but he stopped as he ate the treat. Sadly, though, he got out of my hold and ran under the couch again. I realized if I did two nails a night, I could get it done in about a week. So I stopped for the night.

I watched countless Youtube videos and read endless articles for tips to trim nails. I put him on the counter, so he was out of his comfort zone. (Okay, that time I did cut a little too deep and got dog blood on the kitchen countertops.) I would sneak attack him and trim his toes while he slept. I was only able to finish days later when my cousin Sofie held him in a death grip while I trimmed. He was so traumatized that for days he would sit with all his paws curled up underneath him, hidden from me. 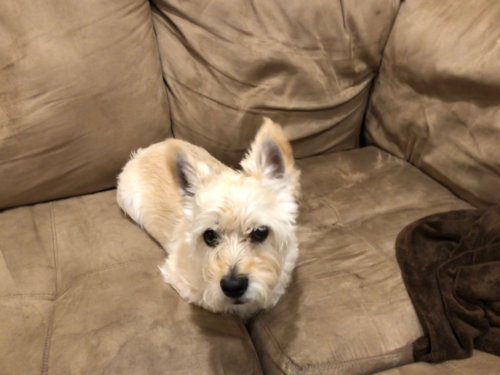 Just as the hard part was ending, the grooming shears came in the mail. Sofie was concerned Apollo may be afraid of the sound from the clippers, so I tested it straight out of the box without reading instructions. I did not realize I needed to use the comb attachments as a guard, so I gave Apollo a giant bald spot. But, hey, he wasn’t scared of the clippers!

For my own hair, I watched one YouTube video, but for Apollo I watched many. In one, a lady pulled out the dog’s hair with her hand; in another, a woman warned about holding the dog’s mouth shut to not cut his tongue. I also searched, “how to groom the genitals,” which luckily didn’t pop up anything too weird and gave a few tips.

Armed with instructions, I guessed which guard would work best for Apollo and stuck him in the bathtub to get to work. I took a few runs through his hair and it seemed like it wasn’t cutting much. Sofie handed me the shortest guard instead—assuring me that would be the best option. She was wrong. Apollo ended up with bald streaks down one side where we tried that. 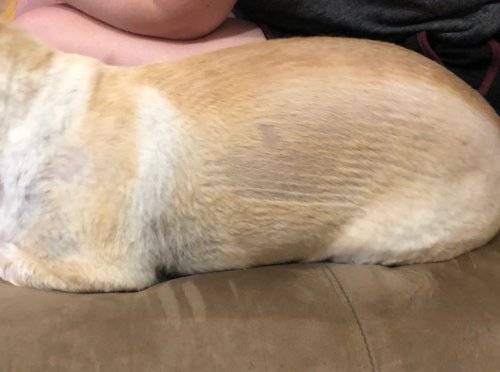 However, after a while, I got the hang of it. Except for the legs and feet area, which I pretty much just avoided, and the pre-mentioned bald spots, everything looked pretty okay. (I did realize later that I forgot the area under his tail, so Apollo now looks like he has a puffy butt.

I trimmed Apollo’s face with scissors because that is what the groomers do. He sat pretty still as I held his mouth shut and trimmed around his face—I didn’t want to cut his tongue like the Youtube lady warned after all. 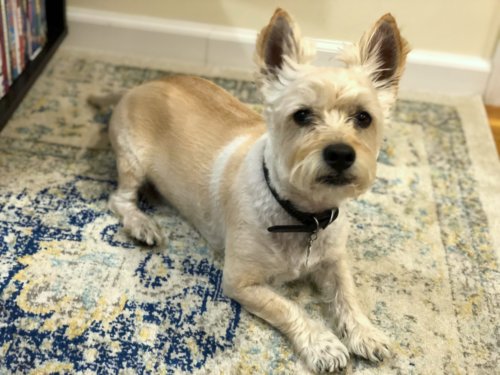 Apollo, from his good side, happy that the process is over.

So with the torturous nail trimming, hideous haircut, and overall stress of doing grooming behind me, would I do it again? Strangely, yes. I wouldn’t want to do the nails again—I’m wondering if I could pay a professional for just that or if anyone has any tips, please tell me! But the actual buzzing of the hair was a skill I had improved in just a few minutes. I think after a few grooms, I might be as good as a professional! … Okay, probably not, but I think I’ll get good enough. I think Apollo will appreciate it, too, not having to hang out at the groomers for several hours until they finish.

Have you ever groomed your dog’s hair? I’d love to hear your stories!

I’d also love to hear any ideas on what I should try to DIY next? I have a couple items of clothing that need tailored and am in need of a wax. What do you like to do yourself rather than go to a professional?