Welcome back to Feminism 101, where a huge group of feminists are waiting to answer your questions! Here we break down myths, share ideas, and hopefully make feminism more accessible and interesting to everyone!

“I’m very curious about when first feminist thoughts occur in someone’s mind. We surely don’t just become an adult and decide to be a feminist and stand for equal rights.”

Thanks for your question Sabrina! Here are some answers from some of our favorite fierce feminists:

Lori Selke: “My first feminist thought was probably around age 4, when people started expressing discomfort at my swim/water-play attire, which at the time consisted of brightly colored denim shorts and no top. The lack of clothing on top was the issue, obviously. But I noticed it wasn’t an issue for boys. Double standard much?”

Hanna Brooks Olson: “I was in the third grade when I decided I wanted to play football. Our family loved the sport and I’d watched it my whole life. When I told people at school that I wanted to play, they told me that football was for boys — but I knew that wasn’t true. My mom had played on her school’s powderpuff team, and anyway, I’d read about Title IX in New Moon Magazine (YUP) so I knew I was allowed to play any sport boys could play. My feminist thought: Just because women don’t play football professionally doesn’t mean I can’t play for my school. Some woman has always had to be the first and do something a woman has never done before.

The next year I tried out for the team and spent the next three years making damn sure I was as good as the next guy, even though I was the only girl.”

Awanthi Vardaraj: “When I was six years old I announced, triumphantly, that I wanted to be a mother when I grew up. My immediate family received this news with enthusiasm, but my extended family was a whole other story. My uncle laughed at my stated ambition. ‘What else will you be if you’re not a mother?’ he asked. I was six and he was twenty-six, but I remember feeling extremely indignant; I remember thinking that this was wrong. Visibly upset, I pummeled his knees with my small fists as he fended me off.

‘GIRLS CAN BE ANYTHING’, I yelled.”

Kait Burrier: “My mom custom-built two large toyboxes for me and my little brother when I was about eight. She sanded the finished products, then stenciled them with the same acrylic paint she used to craft my hair bows. This was shortly after my parents had separated, and it was the first time it occurred to me that someday, all by myself, I could use my own hands to both paint delicate bows and construct boxes from solid wood.” 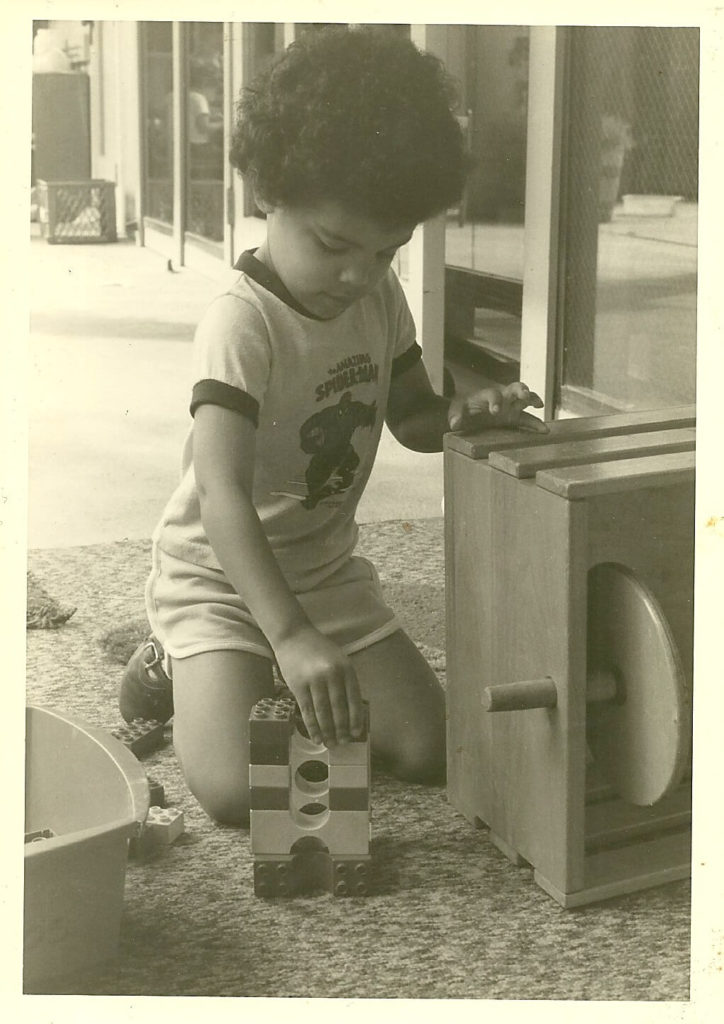 Shannon as a child

Shannon Luders-Manuel: “I’ve always been a feminist because that’s the way I was raised. My cousins and I were just like Jo March and her sisters from Little Women: we wore homemade dresses and questioned the establishment. I was raised in the era of Punky Brewster, and Inspector Gadget’s niece Penny — young women who were in charge of their own destinies. Perhaps my first unconscious act of feminism was in my role play. I always chose to be Superman or Spiderman, never Wonder Woman or She-Ra. Not because I felt the men were better, but because I didn’t see why I couldn’t represent them. I didn’t have long, flowing hair, and at that age, that was fine by me. I just wanted to be able to climb walls and fly.”

Seranine Elliot: “I”d thought that I was a feminist for a long time. Then one day I realized I was a girl, came out publicly, and within a few months understood that I had never been a feminist, but that now there was no way I couldn’t be.

While the world understood me as a man, feminism was a nice idea about abstract things, a noble struggle I could set down when it got too tiring for me to think about. Once the world began to acknowledge that I was a woman, I understood for the first time what it was like to have a struggle that I could never set down, no matter how tiring it got. Because it was mine.

Then I came to understand that while the world had treated me like a white cisgender heterosexual male, I had completely failed to understand what life would be like for anybody else. I understand, now, that my privilege is a burden that everyone around me shoulders; that I have so much of it, now; that I had so much more of it, then.This is why I work to educate men who remind me of the ‘good guy’ I mistakenly thought I was. Because I don’t see how any other woman in the world could possibly have a better shot than a late-realizing trans woman like me at figuring out how to reach someone who is that ignorant, that invested in their ignorance.”

Debra A. Klein: “When she went into work, and I was too young for preschool, my mom dropped me off to stay with an older babysitter, a former neighbor who brought me along to a nursery school ‘graduation’ of another little girl in an apartment building activity room. The chairs were in a circle, and all the kids received construction paper ‘diplomas’ with photos of their Dads in their caps and gowns glued onto them. Where were the Mom pictures? I’ll never know. Even though I was just a tiny visitor that day, I still remember crying at the sight of them.”

Amanda Rose Adams: “I grew up in a very conservative church/school. My mom and grandmothers were all called ‘housewives’ at the time. But my dad was the one who always told me I was smart and would go somewhere someday. My dad’s faith in me insulated me from a lot of what happened around me, that – as an adult – I clearly see as sexist. My first real ‘aha’ moment was in 8th grade confirmation class when my very revered pastor tried to explain why I could never be a pastor or a church elder, and it dawned on me at age 13 that my future in the church was relegated to serving molded jello rings at funerals in the basement. Thanks to my dad I saw a different future for myself. My dad was not perfect, and in hindsight I see how he too was a product of his times, but he never treated my future as less valuable than my brother’s, and that was a faith I never lost.”

Gyda Arber: “I clearly remember being in kindergarten and discussing Geraldine Ferraro, the vice presidential candidate at the time, which I was able to glean was a first/big deal. The teacher asked us to raise our hand if we would vote for a woman for president and I remember throwing my hand up in the air (most of the boys did not). She then asked us if we would vote for a woman no matter her politics and I remember thinking yes, absolutely (I didn’t really understand the political parties at that point). I felt the whole conversation was a bit ridiculous because I couldn’t understand why it was even a conversation — of *course* a woman should be president.”

Therese Shechter: “My childhood was full of inchoate feminist thoughts but I wasn’t nearly precocious or outspoken enough to actually voice anything. My big revelation, and the foundation of my film ‘I Was A Teenage Feminist,’ was the TV show “Free to Be…You and Me,” which debuted in 1974 just as I was becoming a teenager.

My revelation came from the animated story of Atalanta, a beautiful brilliant princess whose father is determined to marry her off to the swiftest runner in the kingdom. Not only does Atalanta run as fast as any of her contenders, but the story ends with a happily-ever-after that has her setting off to have her own solo adventures.

Its message blew my mind. I didn’t need to marry a handsome prince to live happily ever after? It went against all conventional fairy-tale wisdom and it changed the way I looked at the world.

I was part of the first generation inspired by the feminism of Free to Be…You and Me. Looking back on it, I’m amazed that such a blatantly anti-sexist and diverse program was shown on prime time. But the 1970s were a different era.”

Do YOU have a question you’d like our cabal of fabulous feminists to answer? If so, email Avital Norman Nathman at TheMamafesto@gmail.com.