Thank you to everyone who has sent in some questions for this new column!! We’ve gotten a lot, so please be patient as we work through them all. This week, we wanted to look at the phenomenon of folks vocally eschewing the label of “feminist.”

Last week at BlogHer, during her Keynote conversation (you can read excerpts from it here), Kim Kardashian proclaimed to the large audience that she doesn’t think she’s a feminist. This isn’t particularly all that surprising to be honest, because for every person that loudly claims themselves as feminist, many shy away from the label. But why is that? And how can those who are feminist help?

This week’s question: What is the one thing you would tell people that might help ease their wariness over the label?

“Kim, you’re missing the importance of our brand. Feminists are so cool and have been since before feminism was even feminism. Without it, no voting, no Presidents, no getting to have a career at all, let alone one that’s maybe even better than your husband’s? Don’t diss us; join us.” — Sarah Buttenwieser

“Feminism isn’t about living your life in a particular way. You can be a feminist businesswoman or a feminist stay-at-home mom. Feminism is the belief that women should have the right to follow their own path, whatever that may be. Some shy away from the label because they equate feminism with hating men, and others fear they aren’t feminists if they’re not in the workplace. Their fears aren’t completely unfounded, because some feminists will say that both of these are necessary traits in order to be a true follower of the ideology. However, true feminism has nothing to do with men or with employment. It’s all about fairness. And that’s why men can be feminists too.” — Shannon Luders-Manuel

“The reason ‘feminism’ is more important than ‘equality’ is because women have been at a disadvantage for centuries.” — Janis Vogel

“Feminism is not a secret code for ‘man hater.’ Embracing feminism means wanting a world where men are made free of toxic masculinities and be allies in the fight against sexual and domestic violence. Feminism can’t work unless we make space for men in the continuing dismantling of the patriarchy. I adore men. Some of my favourite people are men. Lovers, friends, heck even my own kid: all men and all a part of my version of feminism. It’s a terribly antiquated understanding of ‘feminism’ that thinks we all hate men.” — Lyndsay Kirkham

“Feminists have the best Kool Aid. (one of us)(One Of Us)(ONE OF US)” — Claire Linic

“Feminism isn’t just for white women, though given some of its history and its manifestations in recent times via social media, I can understand why some women would have that impression and shy away from it. Misrepresentations of feminism and feminists are problem, but I’m not bothered by someone simply rejecting of the label. Because many women do, and historically have done, the work of confronting injustice related to gender as it intersects with race, class, and other issues, without ever calling themselves ‘feminist.'” — Deesha Philyaw

“Feminism simply means equality for all. That’s it. There’s no hating on anyone, apart from the disappointment in people who are against equality. Why would you want to be lumped in with them?” — Sara Habein

“People in the majority are lucky to ignore labels, because everyone assumes their identities and, usually, gets it right. It’s not always the case for others, people who’s identities are often erased because most people don’t think beyond the norm. To me, feminism is a label to stand for people like me, who are queer, non-binary, disabled, and a person of color–someone who looks like a cis, straight, totally-doesn’t-have-mental-illness-you-have-your-shit-together white person. To me, feminism is a stand for people who others overlook–queer, Black, Latinx, Hispanic, Middle Eastern, disabled, trans, non-binary, anyone whose voices are ignored in favor of the majority. That’s the real meaning of feminism, uplifting the voices of marginalized groups. To say I’m a feminist doesn’t mean that I hate men, like a lot of people seem to think. It means that there are groups whose voices are muffled and ignored, and it’s my responsibility to uplift them.” — Naseem Jamnia

“I’ve always viewed the word feminist as a synonym for flexibility. The point of feminism is that as women we accept and respect one another for who we choose to be. And the guarantee of feminism is that we have that choice in the first place!” — Debra A. Klein

“Well, are you a humanist? According to the dictionary, humanism is ‘a philosophical and ethical stance that emphasizes the value and agency of human beings, individually and collectively, and generally prefers critical thinking and evidence (rationalism, empiricism) over acceptance of dogma or superstition.’

Feminism is not much different; feminism also emphasizes the value and agency of human beings, believes in equal rights for all, and works to end all segregation in society so that everyone may live with the dignity and respect they deserve.” —  Awanthi Vardaraj

“Being feminist simply means that you believe women should have the same right to respect and happiness as men. It’s not about degrading men; it’s about upholding and improving women’s value in society.” — Christine Stoddard

“The one thing I would say to ease people’s wariness over that label is that if you have ever enjoyed the right to register for a credit card, open a bank account or get a mortgage without a man’s name next to yours on the document, you are benefitting from the word you fear. And hey: if you like the right to vote and use birth control, you are part of the world that feminism has helped create,  so enjoy it with a nod to the movement and the label you aren’t sure about!” — Mayim Bialik 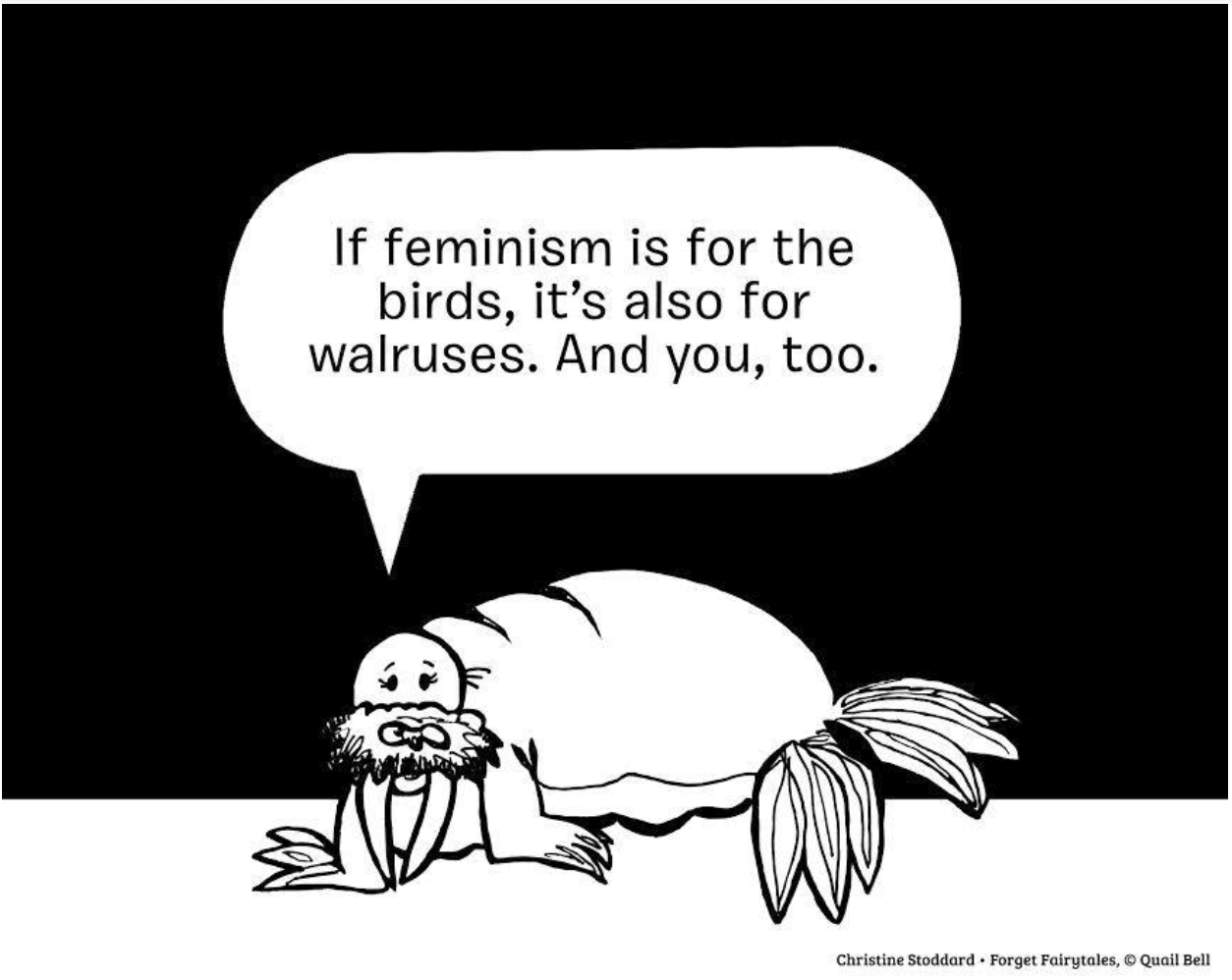