A set of choice sleepwear has long been the sartorial staple that takes center stage in some of our most beloved holiday tales. Think of “mamma in her ‘kerchief, and I in my cap” settling in for a certain winter’s nap, Ralphie Parker pouting in his pink bunny pajamas from Aunt Clara, or Ebenezer Scrooge staring down Jacob Marley’s ghost in his dressing gown and slippers.

More recently—in 2013, to be exact—holiday pajamas went viral by way of Dean and Kim Holderness and their two young children. The family quartet posted a YouTube video titled “#XMASJAMMIES” in which they rapped about the year’s accomplishments, all the while showing off their matching red, green, and white two-piece pj’s. The video has racked up more than 17 million views to date, and The Boston Globe reported that by 2016, Target expected to sell 500,000 matching family sets of holiday pajamas.

That said, families dressing up in matching pajamas predates the social media age by several decades. “My earliest picture of matching family sleepwear is from 1958,” says author and vintage fashion expert Debbie Sessions, owner of VintageDancer.com. “Matching sets for parents and children and couples took off in the 1950s and continued off and on into the ‘60s, ‘70s and ‘80s.” 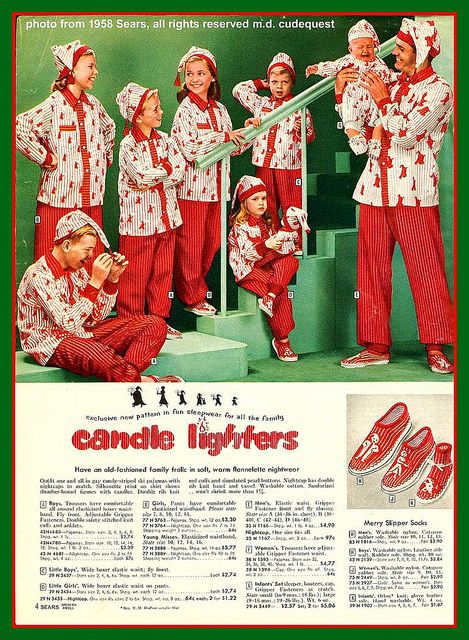 A matching set available in a 1958 Sears catalog.

As fashion historian Kimberly Chrisman-Campbell wrote for The Atlantic earlier this year, “Mother-daughter fashions reinforced the primacy of the domestic sphere” in the years following World War II. It’s perhaps unsurprising that clothing manufacturers doubled down on this notion wherever possible, in this case emphasizing the nuclear family unit with the help of novelty matching sleepwear.

“Matching mommy-and-me [fashions] have been around much longer than pajamas. I have images from the late 1930s of mothers and older daughters in matching coats, overalls, and dresses,” says Sessions. “In the late 1940s, girls’ clothing started to mimic women’s clothing…. Little girls were dressed like little women, so there were a lot more matching sets being advertised. I don’t see many little boys’ matching sets, although matching brothers and sisters was common. I see Dad entering the matching picture in the late 1950s and early 60s, which is also when the novelty of matching family pajamas took off.”

Though modern-day families who purchase matching pajamas tend to make a point of sharing their synchronized sets via social media or snail mail holiday cards, Sessions’ research has yet to reveal an image of an actual mid-century family wearing complementary clothing. “I haven’t found any non-commercial images,” she says. “They probably exist, but you have to remember indoor photography was tricky and expensive. Most photography was [done] outdoors and in their best dressy outfits. Pajamas were not to be seen in public—even visiting houseguests would not be shown a family’s personal home wardrobe. Robes were worn over pajamas.”

Despite the matching family pajamas’ mid-century origins, it seems that today’s “pictures or it didn’t happen” era is perfectly suited to their renaissance. Companies like Oregon’s Hanna Anderson have been selling the sets for decades, though their sales have spiked dramatically in recent years. A quick Google search shows that mass-market retailers like Kohl’s, Old Navy, and JCPenney are offering their own affordable takes on the trend as well.

Of course, a highly orchestrated, slightly silly photo setup will only work for as long as the kids can be wrangled to participate. A mother herself, Sessions now tries to coordinate her family’s holiday ensembles when she can. “The kids are young enough to love wearing matching sets. I know this won’t always be the case, so I’m enjoying it while it lasts.” 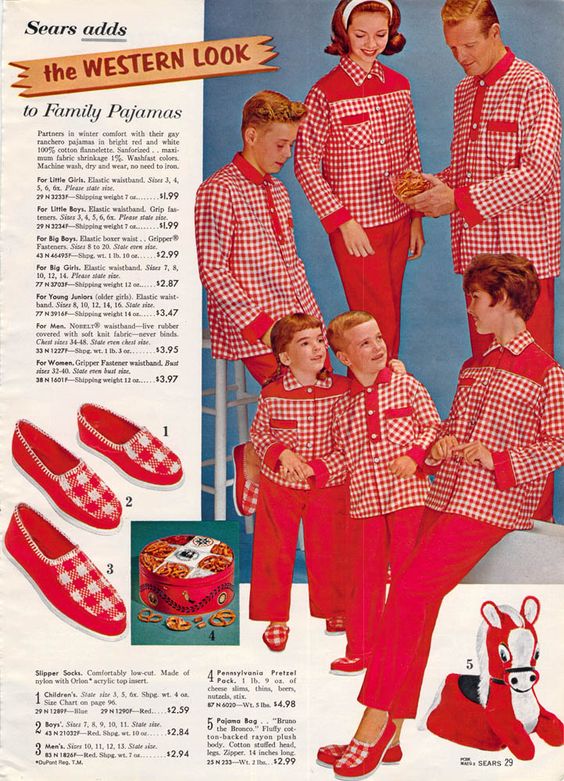 A matching family pajamas line from Sears, in 1962.
SHARE:
Explore These Topics: Clothing Family Holidays
More Like This: