I grew up with a mother who was an outspoken strong woman. Her whole life–and mine–she was perceived as a “bitch” before the word was even uttered as anything other than a curse. She was a teacher, and part of the feminist awakening of the 1960s and 1970s, but unlike the “leaders” of the second wave of feminism, my mother wore make-up, dressed in “feminine” clothing, embraced her role as a homemaker and wife and she shaved. She shaved her legs and her underarms. I would sometimes see her doing so after the shower (my childhood house had only one bathroom for four people until I was 15 and my brother was 19 so we often shared space in the bathroom).

Shaving seemed dangerous to me: the thought of a blade on your skin never sat right with me. I would watch my dad shave in the mornings, and he would often cut himself and have to put “stiptic” and little bits of toilet paper on his cuts, which I would remind him to remove before he went to work. The thought of cuts on my legs or underarms did not appeal to me.

And the main reason I assumed my mother shaved was because she was so beautiful. My teenage mind thought, “Beautiful women shave.”

I see now how that makes no sense, but as an awkward teenager who did not inherit my mother’s grace or her delightful small features, I felt very different from her in terms of my beauty regimen. I did not wear make-up at all except for lip gloss or lipstick until college, and I most certainly did not want to shave. And again: the fear of bleeding and dying.

In junior high, the girls I knew with peach fuzz on their legs started shaving, as some rite of passage into womanhood, I suppose. I found it absurd. There was nothing to shave. I admired the sheen of their legs, though. It never occurred to me that later in life, I would be told that this sheen is attractive to men: women say that men want to imagine themselves intertwining legs with these legs. 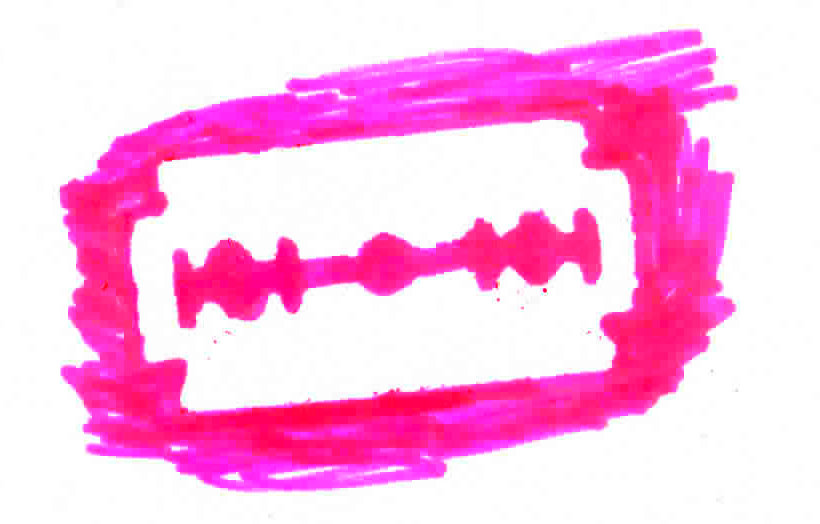 It was noticed in junior high school that I didn’t shave, but not by the boys. I hadn’t ever been more than kissed until I was almost out of high school, and I certainly was not rubbing legs with anyone. This was the ’80s and early ’90s; we were all fairly innocent, at least in the world I lived in. But girls noticed. They would either turn their noses up, or tell me how lucky I was to have fair body hair. I felt either shunned for not being “cool” and “womanly,” or ignored for my convictions. I wished I did have dark coarse hair so I could show how my decision not to shave was not because I had fair hair; it was because I did not see the point in removing hair to meet a standard of beauty that was determined by men. Women should be smooth. Women should be clean. Women should take on time-consuming beauty regimens and justify millions of dollars of advertising designed to reinforce our insecurity about our bodies.

Once I had my first boyfriend and boyfriends after that, I was relieved that the kinds of guys I liked didn’t care that I didn’t shave. Apparently, everything about me was selecting for men who were rebellious, against the grain (no pun intended!), appreciative of quirky strong women, and unattached to societal notions of beauty. This has been true of every single relationship I have ever been in. Even though I dated men who liked me as I am, I acquired a sense of shame about not shaving. I can’t explain it, but my underarms – which by all standards are not very furry – brought me shame and still do. In high school, one of my dearest friends who also didn’t shave would wear sleeveless dresses and dance at jazz clubs with her arms in the air. I cowered under cardigans and jackets and still do.

I choose clothing that does not show my underarms. Since I adhere to Jewish guidelines for “modest dress,” I don’t wear sleeveless clothing anyway, but my decision to avoid sleeveless clothing began long before I took on modestly dressing. And even around the house when I wear whatever I want, I feel self conscious if friends come over and my underarms might show.

I feel shy about my underarms even though I would never want to shave them. I simultaneously feel empowered and free because I don’t shave and ashamed I don’t look like most every woman I know. Many people would say, “If it doesn’t make you feel good why do it?” and conversely, “Beautifying yourself should be about whatever makes you feel good.”

Are the things we do that empower us as women still powerful if we also feel shame about them? Can my decision to not shave or to not get work done on my face exist in two dimensions? Namely: one dimension is strong and proud and principled; the other is constantly being reminded I don’t look like other women.

My sons grew up never thinking about women shaving. They once saw my ex-husband using a pink can of shaving cream which I had given him to use for his daily face shaving; it was SWAG from an event and my older son asked why a man’s shaving cream would be pink since that’s a “girl color.” I laughed out loud and explained to him that most women shave. He thought I was kidding. “No, mama!” I had to explain that most women shave their underarms and legs. He said, “Why?” I said, “Exactly.”

Sometimes the little hairs on my legs poke through fishnet stockings. Sometimes when I get out of the shower or a pool, the hairs are darker and I rush to dry my legs so they stand up and away from my legs and are less noticeable. Sometimes I wish I could shave just once to see what it feels like.

But then I remember that maintenance exhausts me. Especially maintenance established by an arbitrary male-dominated lens of beauty. And hair comes back darker and thicker; that’s a thing. Too much work.

And I guess you want to know about pubic hair. I don’t think women should have to trim pubic hair. I know it’s in style and most women I see at the spa have shaved vaginas. Amy Schumer said it best when she said men like our vaginas to look like we are children. It’s kind of true. It’s weird to me and I know I sound like an old fogey, but I just like humans the way they come: men as well as women.

My ManFriend has the most beautiful friends of anyone I have ever loved, and I sometimes feel like a troll compared to them. He gets a kick out of my independent spirit and I know I am different than anyone he has ever loved, but that’s okay too.

I am mostly glad that I did not ever shave. It challenges me to constantly reassess my self perception and forces me to hold multiple notions of myself at once. I am strong and independent. I am principled and I walk the walk which I also talk.

And also, I am insecure and afraid to be teased and afraid to be rejected and afraid I am doing this woman thing wrong. But I like that I don’t have to worry about maintaining this basically unnatural process of removing hair that is there for a reason. And I also save a ton of money on shaving products, waxes, and the like.

Maybe someday I’ll figure it out. I’ve got plenty of time, what with the thousands and thousands of hours I save by not shaving, right?

Read More From Mayim
Explore These Topics: Body Hair Women
More Like This: