Two years ago, I celebrated New Year’s Eve 2016 at a club in the Meatpacking District of New York City, clad in a little black dress and dancing the night away, cocktail in hand. Last year, however, I hardly felt like going out dancing. Mostly because I was very pregnant. But also because I, my very large belly, and my husband had just moved across the country from New York City to Seattle, in anticipation of the birth.

It had been bittersweet. Behind us were our younger days in NYC; in front of us stood the terrifying unknown of what it could possibly mean to be a parent. After almost eight years away from our hometown of Seattle, we made the decision to return, to be around family. It seemed to be one of those things one does when expecting a baby. Now, just days after Christmas, the movers had finally delivered our belongings, and we could unpack and properly prepare for the arrival of our baby boy, who was due February 8.

On the night of December 30, we took a break from unpacking and watched a movie. I got up to go to the bathroom, one of my favorite pastimes as a pregnant lady. Before I could make it to the toilet, I felt a splash on my thighs and a puddle of clear fluid appeared on the bathroom floor. I stood frozen.

When I finally called the hospital, the nurse over the phone didn’t miss a beat: “It sounds like your water just broke! Come on in and see us!” As we rode the hospital elevator up to Labor & Delivery, I began to cry. “It’s too early,” I said to my husband. “It’s just too early.”

The doctors confirmed that my water had broken, and when I left the hospital, I would be leaving with my baby. I was now on hospital bedrest. My job was to try to “keep the baby in.” While six weeks premature wasn’t extremely dangerous for the baby, it was certainly not ideal. Even a couple more days of development inside the womb would help him. The main risk was that he could have trouble breathing, as the lungs are among the last things to fully develop in utero, so I got steroid shots to help “kick start” the baby’s lungs. The shots would need 48 hours to fully take effect. However, since my water had broken, that meant the closed system of the amniotic sac that protected the baby was already ruptured, and there was a risk of infection for both of us. The balancing act was having him stay in utero long enough for the steroids to help his lungs, but not so long that we faced infection from the ruptured sac. The doctors told me that we would begin to talk inducement after the 48-hour period.

However, we didn’t make it that far. My contractions began in earnest at around noon on December 31. As I became more and more dilated, the doctors told me that from the monitors, they could see the baby was stressed. The NICU pediatrician team came and spoke to my husband and me about the need to take the baby upon birth to an incubator in the NICU for warmth, as he would not have the fat content yet to regulate his own temperature. His lungs would also be assessed. In a daze, all I could do was nod and then grit my teeth through the ever-increasing contractions. Around 5 p.m. and at 8 centimeters dilated, I asked for an epidural. After I received it, I slept for a bit, and then woke up to more doctors explaining more procedures and more tests. At 9:30 p.m., I began to push. My hospital room was packed with family, the OBGYN doctors, the NICU doctors and nurses. After one hour of pushing, we had a baby!

My son, Wyatt, was born at 10:30 p.m. on New Year’s Eve, six weeks premature. I held my beautiful boy for a just a couple of minutes before he was rushed to the NICU, and my husband, parents, and mother-in-law followed. During the actual delivery and the aftermath, my hospital room was packed with family, doctors, and nurses. Suddenly, the masses disappeared and only one nurse remained to help clean me. As she held my hand and helped me literally go to the bathroom, she looked at her watch and said, “Oh, it’s the countdown! Shall we?”

We didn’t know how long Wyatt would need to stay in the NICU. Each morning and night blended into an endless cycle of blood draws, tests, temperature logs and feeding charts. Wyatt’s lungs were healthy, but he was jaundiced and had trouble gaining weight. He slept in a phototherapy incubator for a couple nights to fight the jaundice, wearing stylish baby sunglasses in what we called his “spa treatment.” We added special fortified formula, or “baby weight gainer” to my breastmilk, which I pumped, since he was unable to breastfeed due to the underdevelopment of his mouth muscles.

After a couple nights of sleeping at the hospital, we visited home to shower for the first time since the birth. We walked into our house and our hearts fell at the sight of the unpacked boxes and the dirty dishes on our kitchen counter, remnants of our dinner from the interrupted movie night just days before. Even if our son were to come home soon, how could we bring him home to this? 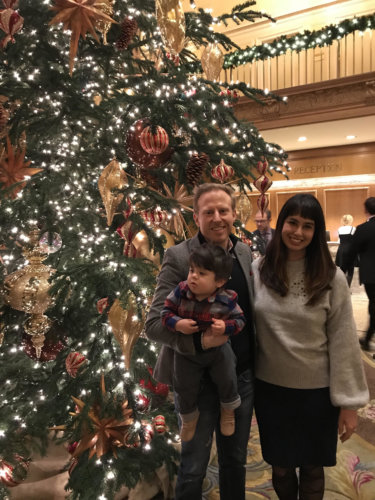 Jamie and her family, gearing up to spend another New Year’s Eve together

Then my husband’s brother called and told us the family had gotten together and organized an “Unboxing Party” for us to help get things in order for us. The idea was such a kind and unique thought. We knew we needed the help and accepted.

During what would end up being a week’s stay in the NICU, we slept every night next to our baby. In that week, we truly saw the love of our family come together for our son and us. My mother-in-law brought us dinner. My father-in-law and stepmother-in-law brought us magazines and snacks. My sister flew to Seattle from San Diego and ran errands for us. My parents cleaned our house and did our laundry. The list goes on and on. It turned out that we were discharged before the Unboxing Party could occur, but we were so grateful for the very thought.

The night we returned home with our baby, my stepmother-in-law came and stocked our fridge with soup, eggs, fruit and milk. “It’s just to get you through the next 48 hours,” she said, with a warm hug. I knew that, thanks to all our loved ones, we would be getting by for much longer than that. This was the reason we came home.

One year ago, I celebrated New Year’s Eve in a hospital gown, an IV in my arm, and the arrival of a Christmas miracle. This year, as I’m about to celebrate his first birthday, I remember the amazing kindness and support we had during my son’s very dramatic entrance into this world; and I think of New Year’s Eve as my new day of Thanksgiving.