I had always loved a Facebook birthday celebration, but never considered the cathartic power of a Facebook funeral. So when I posted the news of my mother’s death recently, boy, was I in for a surprise.

My mom was 98 and lived an inspiring life, full of selflessness and care for the world beyond her own existence. When she died, peacefully with two of my brothers at her bedside, I didn’t post the news for a few days. I needed to keep to myself and to notify some friends and family members personally, before they read about it with the masses on social media.

When I finally published the news on my Facebook account, outpourings from many of my 1,123 friends had the unexpected effect of a memorial-service condolence line.

Yet, these Facebook friends weren’t just sad for me; many felt like they had lost my mom, too, even if they had never met her. She had her fans via my many posts and published articles about her through the years. And they were intrigued by the quirky details of her life after reading her obituary: She was the granddaughter of the founder of Goodyear Tire and Rubber Company, and her mother helped found Alcoholics Anonymous.

With Facebook itself, I have a love-hate relationship. My account isn’t public, but I’m not naive enough to think of it as truly private. I used to be an extremely active user—perusing friend’s article referrals, posting my own and commenting frequently. 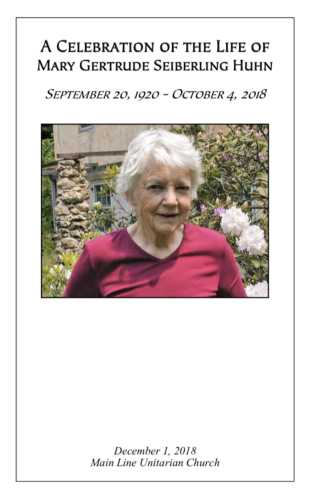 I posted detailed personal notes when I could—hoping in a Facebook karma way that other users would be inspired to do the same. That’s what made it real. It’s not good when it’s just about LIKEs, vacation photos, who saw “Hamilton,” and politics.

But then came the issues concerning the election, Russia, Cambridge Analytics, privacy in general, advertising, the messenger app. More than ever, I felt like Mark Zuckerberg had too much unchecked control. So I suspended my account in the spring and saved hours not going down the Facebook rabbit hole.

I wasn’t the only one. A Pew study done earlier this year shows that 42 percent of American adult users of Facebook stopped checking the social media network for a few weeks over the year; 26 percent deleted the app from their phones; and 54 percent changed their privacy settings.

Some work obligations led me to rejoining the site, but I spent a lot less time there.

Then my mom died.

I announced it in that big-letter format: “My lovely mom died last night. 98. We miss her terribly, but she was ready to go.” I posted a few obits. A few weeks later, I added a personal note about my infinite sadness over it all.

And my Facebook friends were amazing. This collection of pals, far and near, ranging from acquaintances to BFFs, were incredibly supportive. They blew my mind. Over and over again. 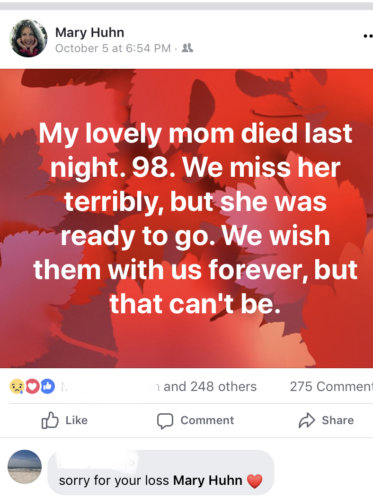 Those friends, who in many cases aren’t the same as my everyday texting friends, were sincerely saddened by the news. Many knew her only through photos of her gardens, her house and our family as well as longer musings, such as baking a soufflé with her.

She had also met many of my friends over the years—from high school pals and college besties to members of my old Shakespeare reading group, co-workers and friends from my decades of being in New York. A select few recalled hearing her recite a poem at my wedding, which she, inspired by Chaucer, had written in Middle English.

Of course, the phone calls, emails, snail-mail cards and visits with hugs from IRL friends and family members are irreplaceable, but this virtual Facebook love has really helped me through such a tough time. The sincere show of support provided a micro-example of how the ripple of one life—my mom’s—could touch so many. Even on Facebook.

I recalled a day in 2001 when a friend of mine texted me about the death of his mother from his flip phone to mine. This was clearly long before Facebook became our town hall and our phones had become parts of our bodies, if not our souls. I was appalled. Death isn’t for texting! I thought. It is for tears and hugs and the sound of people’s voices who you love, and who love you back by being there! In person.

I still feel that way. But the way my own mother’s passing resonated on Facebook—and the way the outpouring affected me—has made me reconsider how we should experience life and death.

I suppose that’s one last gift from my amazing mom.