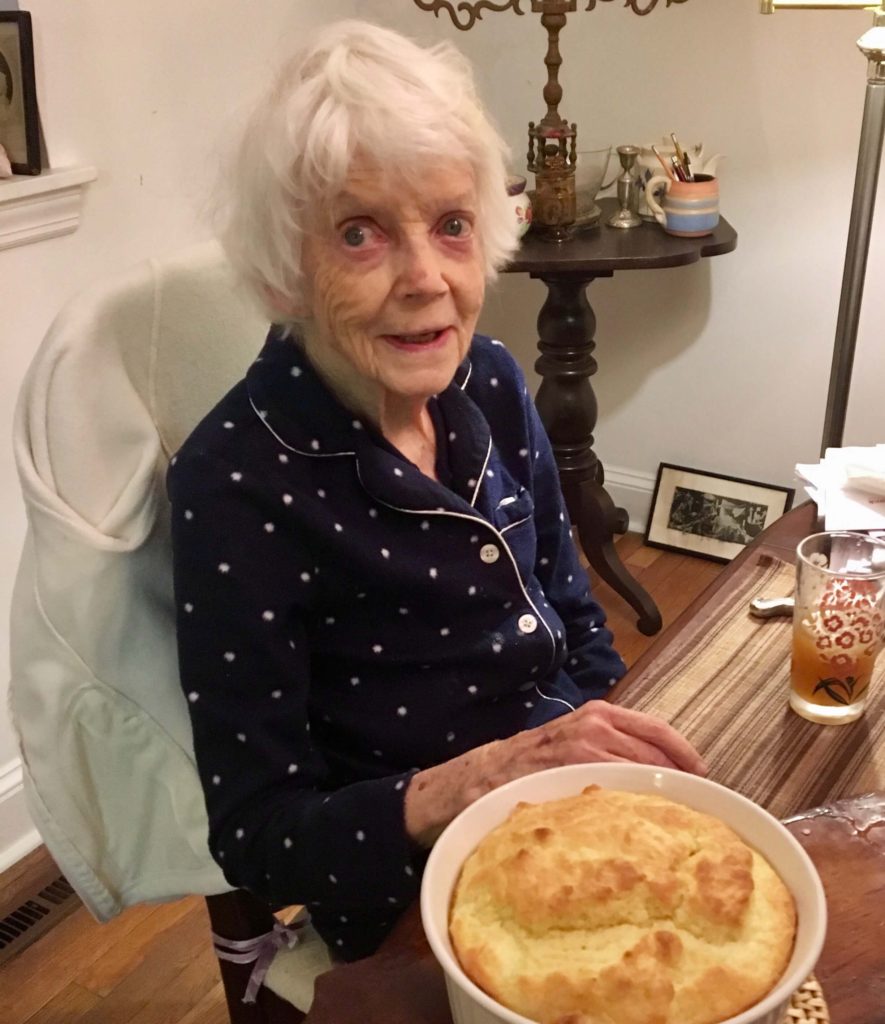 I recently visited my 97-year-old mom for two nights at her house in the Philadelphia suburbs. She has full-time care now — between an aide, Cora, and my brother, Curtis. I was able to give Curtis a short break. Not that he asked for one.

I arrived on Monday, after soaking in the autumn colors from my Amtrak quiet-car, with intentions to make her a cheese soufflé and ratatouille from her “Gourmet” cookbook. She has two huge brown volumes — copies of which my dad and she would often have inscribed and given as wedding presents.

At her recent birthday celebration in September, before the festivities she told me she wanted ratatouille loaded with garlic and lots of eggplant or “it’s just not ratatouille.” She also wanted a cheese soufflé. I’ve never made one before, but was willing to try. After Curtis picked me up at the station, he got the ingredients for everything — including ripe Jersey tomatoes – and eggplants.

The secret to Gourmet’s ratatouille recipe is a slow cook — low heat for 90 minutes. When I mentioned to mom that I doubt she had the luxury of 90 minutes to prepare a side dish for four kids, she agreed. She certainly often made a quicker version of ratatouille from her garden’s jungle of vegetables for us under-appreciative kids.

While that dish scented the kitchen, I followed Julia Child’s cheese soufflé recipe. Mom, who could make a mean soufflé back in the day, wanted to whip the egg whites into stiff peaks — using an egg beater. She did a little, but she can’t stand without losing her balance. It was awkward for her to beat the eggs with the bowl on the dining room table while she sat, so I finished.

Next, I made a roux with butter, flour and hot milk, then I beat the egg yolks, one at a time, into that. But before folding in the egg whites, I missed a crucial step. I forgot to add the grated Swiss cheese! (Mom would have preferred “regular” cheese, cheddar.)

I fudged it — managing to push the egg whites aside, mix the cheese in, carefully fold in the egg whites — then popped it into the oven. I wasn’t optimistic, but not much can go wrong with baked eggs, butter and cheese — it could just end up more quiche than soufflé. As instructed by Julia (and remembering such warnings from mom when I was a kid), I didn’t dare open the oven for 20 minutes. By the way, I was surprised that mom and dad didn’t have Julia’s classic book, “Mastering the Art of French Cooking.” It seemed to be right up their alley — but dad had actually learned to cook mostly in France after the war.

After 20 minutes, I peeked in the oven, and, success! The soufflé had browned and risen nicely. I let it cook five more minutes, removed it from the oven, warmed up our plates in the microwave (heated plates by Madame’s request) and served it. It was a little undercooked in the middle, but I avoided that, and after serving I put it back in the oven. Mom couldn’t believe I had never made a soufflé before and was proud of me. We clicked water glasses as she said, it was so much fun to do. I’ll make you another one next time, Mom. Maybe chocolate. 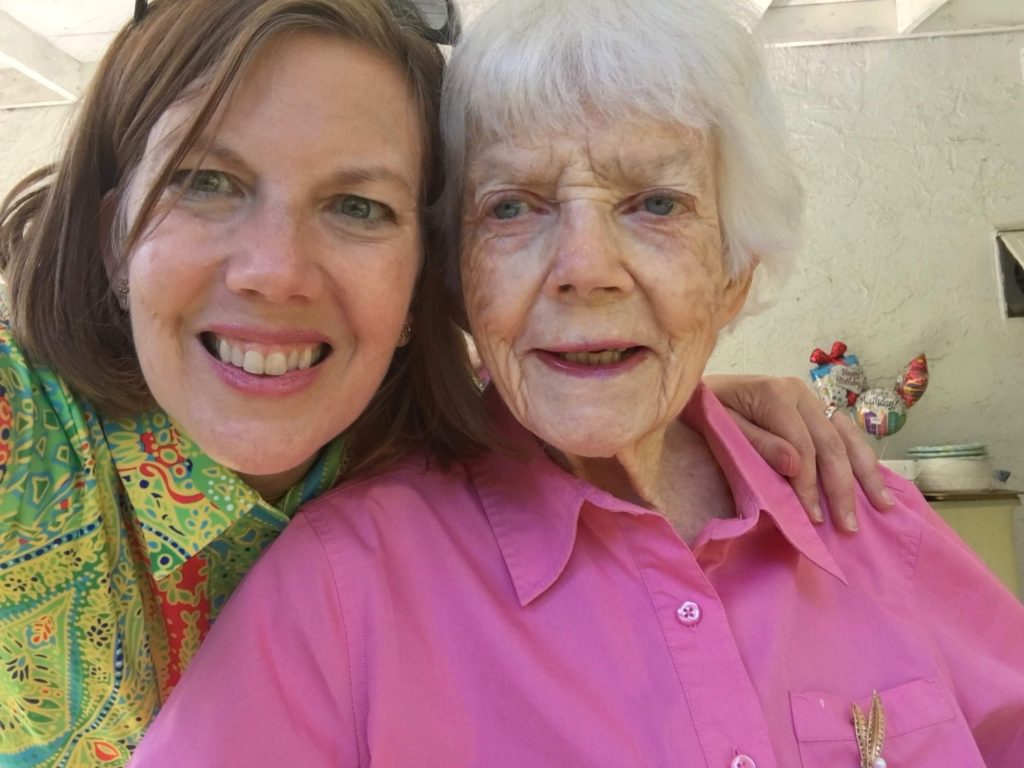 After dinner we watched “The Andy Griffith Show” and some of the Yankees-Astros game. She wasn’t interested in Rachel Maddow that night, which is good because she gets upset by everything Trump does.

On Tuesday, a patient hospice worker came to hang out with mom, so I took a pretty walk around the suburbs on this cool fall day. I used to take such strolls with mom, who loved to swim, walk and bike everywhere, as well as speed in her convertible VW — as she drove us kids to music lessons and herself to protests (i.e. no nukes) or her recorder group.  She drove and walked on her own until she was 95, then everything kind of collapsed, physically.  After the hospice woman left, mom took a nap, breathing from her oxygen tank. Her heart is weaker, which leads to less oxygen to her brain — and to confusion. She is mixed up about her house, who my husband and son are, and sadly, who I am. The O2 helps.

We had a less-complicated supper (more ratatouille), and watched the same TV (Don Knotts!) with a little “MASH” thrown in. Tired, she didn’t even bother to check out Rachel Maddow that night.

After she was tucked in, I showed her a birthday card that my son, Altaseb, made her last month — which says, “I want to be like you, kind and smart, when I grow up.” She was really touched and remembered that the next day.

I didn’t sleep so well, worried about my mom and thinking about the inevitable. I woke up early, poured some strong Chock full o’ Nuts coffee, and while she still slept, took a chilly morning walk.  I rescheduled my train home for a little later on that day, Wednesday, so I could spend more of the day with her. It’s never enough time, is it.

At a recent summer visit, she read Robert Frost’s “Birches” to me:  “I’d like to get away from earth awhile; And then come back to it and begin over.” Mom could easily pull an obscure poem from the recesses of her brain that suited an specific moment. She had a way of connecting me to poetry because she brought it into real life. On other visits, she might recall Milton, Chaucer, Carl Sandberg.

As recently as September, before her party, she recited some of Lewis Carroll’s “The Walrus and the Carpenter” and suggested everyone memorize a long poem like that, or even “A Visit from St. Nicholas” (AKA “Twas the night before Christmas”) to recite when you have trouble sleeping.

That same visit, we went outdoors to sit in the sun. As I held her up to move her from the walker to a chair, we ended up doing a little dance, shuffling our feet. Then we started singing “Blue Skies; Nothing but blue skies from now on.”

What a moment, yet the magic was marred by the thought that this could be our last dance. Or the last visit. Or the last song. But she just wanted to rest  outside with me, so I didn’t ruin this impromptu dance by being teary and sentimental. Instead, we talked as I filled her bird feeder and trimmed some thorny branches from her garden path, as we waited for the birthday party to begin.

This time there was none of that — and she was more confused than ever. She kept talking about Mary being there yesterday, and that she and Mary were looking at cookbooks. I said, “I’m Mary, mom. I’m the only female who calls you mom. I’m your daughter.” Then I asked her if I could borrow her “Cook with the Seasons” cookbook, and she said “Yes, but I want it back so I can give it to Mary Maddox.”

That day was the worst I’ve seen her, clarity-wise. She talked more about the house she’s living in, her old house, the house across the street. She thought she’s visiting her own home, which she’s lived in for 13 years.

After breakfast (which goes into the afternoon) she took a rest in bed with her oxygen, and Curtis arrived to take me to the train station.

I hugged her bony shoulders. I said, I love you and will make you another soufflé soon. She hugged me the best she could. Tears touched my eyes, but I didn’t let go. I could be sad on the train.

Mary Huhn is an SAHM, writer and editor, who’s written about rock ’n’ roll, being a soccer mom and everything in between. She grew up in the Philadelphia suburbs, has traveled, biked, run and cooked extensively, and now, she and her husband are raising a son in Brooklyn.