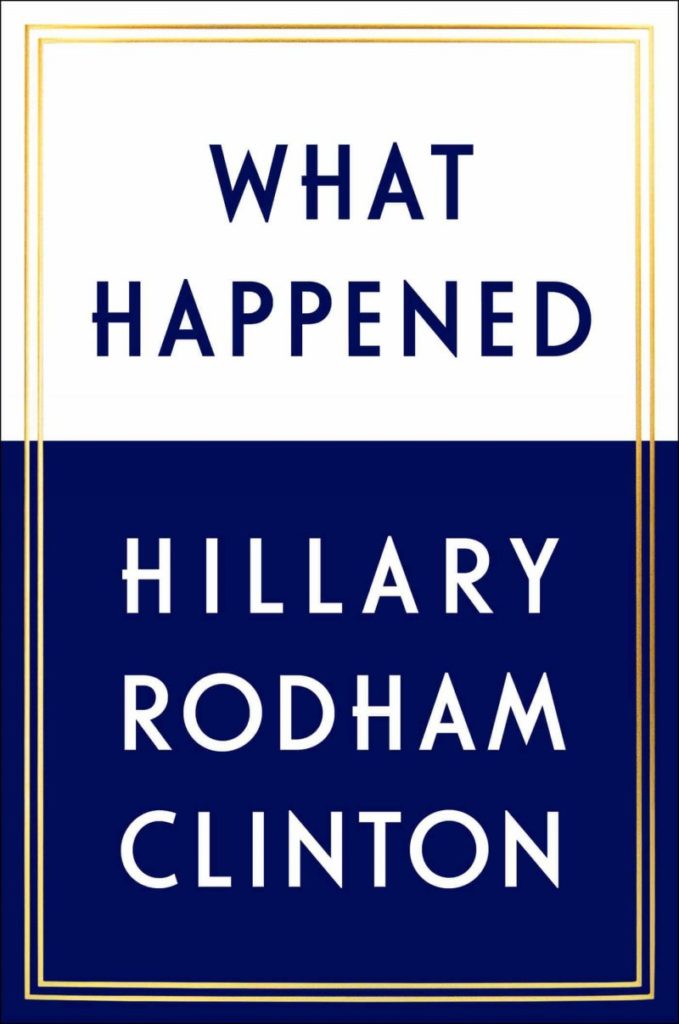 Last week, Hillary Clinton released a book called What Happened – not WTF Happened?????,  but a plain and unadorned two-word title, with no punctuation. But the book itself is a great read – obviously for those who were Hillary supporters, but also for others who can keep an open mind. Like her or not – and there may be an equal number of each of you here – she has been on the public scene a lot and has a lot to share about women in politics and in society, as well as an insider’s look on what it’s like to put together a political campaign and come very close to winning. There are also lessons for self-care after a great loss and how to return to life and to your life’s mission after serious disappointment. I’m about halfway through, but didn’t want to wait to share some of the book’s highlights and quirky stories (so far) with you. So…
Here’s Why You Should Read What Happened, by Hillary Rodham Clinton (with my commentary in italics)
To get Hillary’s perspective on the inauguration. She tells you why she decided to go and how challenging it was to sit there as her opponent was sworn in. She also shared tidbits from her interactions with other political figures on that January day, including when former President George W Bush said, after the inauguration “that was some weird shit.” (This marks one of the only times I’ve fully agreed with George W.)
As a resource, for self-care tips after a loss. How does one recover from such an enormous, public loss? Hillary reconnected with her family, which anchored her, and decided not to try Xanax. Instead she did yoga, including “alternate nostril breathing and in which you alternate breathing through your right and left nostrils: this practice allows oxygen to activate both the right side of the brain, which is the source of your creativity and imagination, on the left side which controls reason and logic.” I’m going to try this the next time I get writer’s block – if I don’t pass out, I’m sure it will be very effective in calming me and unlocking my creativity. If not, I’ll take one of her other tips – drinking her fair share of Chardonnay – and tweak it (I’m more of a Sauvignon Blanc or Pinot Grigio white wine drinker).
To explore what it takes to be a woman in the public eye. In a chapter called “On Being a Woman in Politics,” Clinton admits that while the personal narrative is vital, she was challenged in figuring out how to tell her own story right. Partly, this is because both Bill Clinton and Barack Obama both had such unique stories of their rise to achievement, while Hillary was born into relative privilege in a suburb of Chicago. But where her narrative diverges and becomes important runs parallel with the women’s equality movement. She began her rise to prominence during the women’s movement, was the first woman at the oldest law firm in Arkansas, the first First Lady to be elected to public office, the first woman senator from New York, and the first woman to be nominated for President by a major political party and to win the national popular vote. But still, she was reluctant to self-define as “the woman candidate” because she found it limiting. She wanted to be seen as “the best candidate whose experience as a woman in a male-dominated culture made her sharper tougher and more competent.” She also points out that although people view the women’s movement of something that happened in the past, so much of it is still happening.
She also estimated that – because of what the public sphere demanded of her and her appearance – she had spent 600 hours during the campaign having her hair and makeup done. “The few times I’ve gone out in public without makeup, it’s made the news. So I sigh and keep getting back in that chair and dream of a future in which women in the public eye don’t need to wear makeup if they don’t want to and no one cares either way.”
To learn about the quirkier moments in the campaign:

So what say you, GrokNation…are you reading? Would you like more tidbits? Let us know in the comments. (And yes, I know there are those of you who wouldn’t touch a Hillary Clinton book, but let’s keep the discussion civil, please, without sniping at the former candidate or those who support her…many thanks to you, friends!!)