It’s been a busy week with lots going on from politics to pop culture, so let’s take a minute to spin through five stories from this week that have popped up on our radar relating to women, and why we should care about them.

The Senate Republicans introduced their health care bill late last week and pundits and politicians across the board have been debating it all week. The bill doesn’t have much support. Only 17% of Americans approve of it, and it is struggling to garner enough support on Capitol Hill as well, which could means we’re back to square one when it comes to a replacement for the Affordable Care Act. Regardless of whether or not it passes a Senate vote, it’s crucial to look at how the bill would have affected women.

Essentially, if you’re a woman, odds are you’ll be expected to pay more when it comes to insurance. This bill will defund Planned Parenthood — an organization that many women rely on for contraception and general primary OB-GYN care. It’s no secret that eliminating funding for this organization will have devastating effects on both women and families. However, one of the biggest ways the bill will impact women is that it will give states the ability to redefine what essential medical services are, meaning that some states could decline to cover things like maternity care, prescription drug coverage, mental health care and more. This could leave a lot of women — particularly marginalized and low-income women — in really difficult situations when it comes to preventing or caring for pregnancies.

2. A Helpful Guide to the Clitoris

“Le Clitoris,” a 2016 award-winning animated documentary by Lori Malépart-Traversy has infiltrated many of our social media feeds; it’s a helpful, illustrated guide for folks wanting to learn more about the clitoris — what it is, where it is, and what you should do with it. Think of this as your helpful learning tutorial for the week. This is excellent for folks who have a clitoris and want to understand more about it, and it is also very helpful for folks who are intimate with those who have one. Watch the video and let’s help demystify the clitoris!

3. No More Swimsuits For Sports Illustrated?

Sports Illustrated‘s long-running swimsuit issue has always generated conversation: there’s nothing inherently “sportsy” about the photos, but at least they had actual swimsuits (so, promoting the sport of swimming somewhat?!). However, it seems as if SI — and its social media accounts — are doing away with bathing suits altogether. Deadspin noted that while the annual magazine has always carefully toed the line when it comes to “almost nude,” they’ve pretty much slid into producing shots that are more “porno-like” than photos you’d see coming from a sports-focused magazine. What’s happening here? Did SI realize that sex sells so they’re really pushing it more now? Do they not care about alienating their female sports fans (or even some male ones)? Has the bar really been set so low that a model barely covering her unclothed breasts while strategically placed sand crystals cover her pubic area passes for a SWIMSUIT snap? If you want to publish nude or pornographic photos, fine, be my guest. But please don’t pretend to do so in the name of promoting sports or swimwear. You’re not fooling anyone, Sports Illustrated.

4. Star Wars’ “Forces of Destiny” Brings Women to the Forefront

Star Wars is launching “Forces of Destiny,” a new animated series in July (on both You Tube and the Disney Channel) that features a bunch of kickass female characters, including Leia. And, of course, the first comment is from a dude asking if the show is “for girls.” Thankfully, the folks behind the Star Wars Facebook account schooled him properly. (See below)

Because, yes, Star Wars is for everyone. And having a show that features more female characters doesn’t mean that it’s for girls. It just means that Star Wars understands that their franchise is for everyone, that sci-fi isn’t only for boys, and that both girls and boys need to see more female representation in the series. Three cheers to Star Wars for this new show and their response! 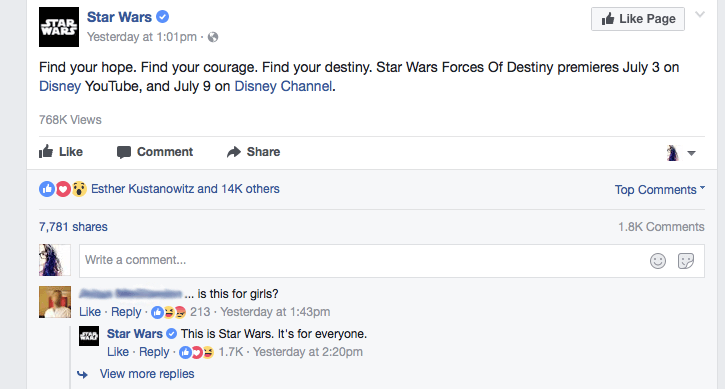 5. The Women of Gilead Are Real, and They Are Frightening

Hulu’s “The Handmaid’s Tale” has just wrapped up season 1 (and we cannot wait for season 2!), but our society may not be as far from the actions and characters of Gilead as we’d like to think. The Advocate ran a piece this week on “The Real Housewives of Gilead,” and honestly, it’s terrifying. Watching Serena Joy and her counterparts from the safety of my laptop is one thing. Learning about the real-life women who oppose birth control, abortion, LGBTQ folks, Muslims, feminism and more has me looking around for the real life Mayday resistance group to help us prevent a new Gilead before it goes any further. Knowledge is powerful, and while it would be easy to turn a blind eye to these women and excuse them as fringe anomalies, they simply aren’t. So, learn about the women and how they’re ramping up a movement behind them — one that will oppress and further marginalize women, LGBTQ folks, people of color and more. Because with these housewives of Gilead, we simply can’t change the channel.

Bonus! If you haven’t already, check out this recent vlog where Mayim and I dig into a current topic through a feminist lens. A recent Instagram post by Amber Rose sparked a discussion between us about whether using nudity for activism could be considered a feminist act. Where do you stand on this topic?

What news stories or bits of pop culture that impact women have you been tuned into this week? Share below!