Unfortunately (though sadly not surprising), we’re back to update this post in the aftermath of yet another mass shooting. This time it took place at a high school in Parkland, FL, and 17 young students were murdered. We’re back here in a place where politicians who have accepted hundreds of thousands in gun lobby money are tweeting “thoughts and prayers” while doing nothing tangible to actually prevent something like this again.

In the immediate aftermath, what can you do?

* Find an event near you. Organizations like Moms Demand Action  are hosting emergency events to speak out against gun violence and demand policy changes.
* Reach out to your representatives. Find out how much money your Senators and Representatives are receiving from gun lobbies. Then send them a letter or call their office. They need to hear from constituents directly. While your Facebook or Twitter posts blasting them may be cathartic, they won’t affect actual change. In fact, a recent survey showed that folks who prefer stricter gun laws are less likely to reach out to their representatives about it.
* Talk to gun owners. Most actually understand the need for stricter laws and support them. In fact, most Americans support stricter gun laws. Talk with your neighbors, friends, or family and ask them to help push for better laws. We need to work together to get these policies pushed forward.
* Check out Every Town For Gun Safety. Their “Throw Them Out” action plan provides you with a step by step process on how to shake up the system to unseat lawmakers who place gun money over lives.
*Walk Out. The organizers behind the Women’s March have called for #Enough, A National School Walkout. Hopefully those in a place to fix this broken system will pay attention. We agree with what the organizers have stated, and hate that it has to be spelled out like this: “Parents have the right to send their kids to school in the mornings and see them home alive at the end of the day.”
* * *

The US experiences more mass shootings than any other country. With over 270 million guns and 90 mass shooters from 1966 to 2012, the time for “thoughts and prayers” has passed. What this country needs now is change when it comes to gun control, but is it even possible? We asked Rebecca Fischer, Executive Director of New Yorkers Against Gun Violence, and Deborah Gitell, who is on Los Angeles’ Women Against Gun Violence Board, Community Outreach. 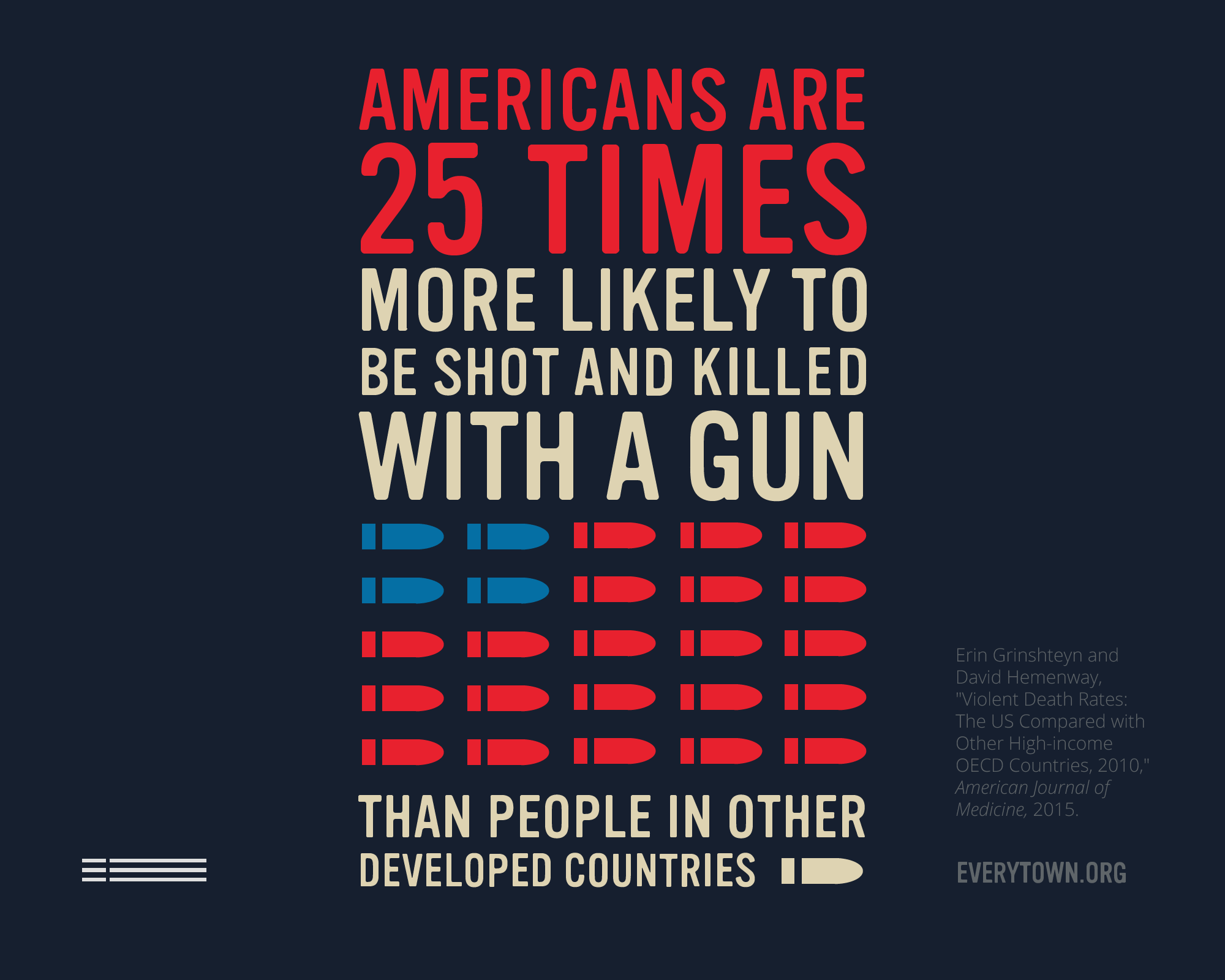 GrokNation: Why has it been so hard to pass gun control laws here? England and Australia have these laws and as a result their gun deaths are much lower than ours.

Deborah Gitell: The NRA is one of the most influential lobbyist groups campaigning for looser gun laws. This past election, they invested $30 million in Donald Trump’s election, and around $20 million on elections in 2016 for Congressional and Senate Candidates. The gun violence prevention movement doesn’t have an equivalent organization with the kind of financial resources to lobby legislators for stronger gun laws. In fact, Pew Research just conducted a study showing that supporters of stricter gun laws are less likely to contact elected officials.

Rebecca Fischer: Indeed, the NRA has had a choke-hold on lawmakers across this country and the carnage continues. However, most Americans support common sense gun safety measures and we all need to make more of an effort to know our elected officials’ voting records on gun bills. It’s critical that we support and elect legislators who consider gun violence prevention a top priority and will not let us down.

We also need to recognize that there have been victories at the state and local level and continue to push for more progress. After the Sandy Hook massacre, Congress failed to act but some state legislatures did take major steps forward. New York enacted one of the strongest gun safety laws in the country and we have the third lowest gun death and injury rate in the country.

However, with mass shootings routinely in the newsreel and over 33,000 dying from gun violence a year, we have to do more to pressure Congress to enact sensible gun laws—from background checks to banning assault weapons to passing laws that will prevent domestic abusers from accessing guns.  Time and time again, we learn that mass shooters have a record of domestic violence.  Right now in NY and in many states across the country, there is state legislation pending that would allow family members to petition a court to prevent individuals who are a danger to themselves or others from accessing guns.  Family members are often the first to see or experience red flags and they need tools to prevent tragedies.

Deborah Gitell: At Women Against Gun Violence, we believe the time for picking up candles and having silent vigils is over.  We need to pick up our phones and make our voices heard.  Since the Vegas and Sutherland Springs, TX massacres, I have been having a lot of conversations with people who are fearful about all the guns on the streets and [fear] that it is just a matter of time before it hits their community. It’s not “if” it happens, it is “when.”  We need to get used to calling our legislators and tell them it’s not okay for us to walk around in fear. This is what it is like to be terrorized – being fearful about sending kids to school or to the movies, or to church or to college.

There are currently a few bills that have been introduced [to Congress] and not voted on.  One is the Concealed Carry Reciprocity Act, which would enable a person with a concealed weapon permit in weaker gun law states like Alabama or Mississippi to carry a concealed firearm when visiting Los Angeles, even though it is very challenging to get a permit in most California jurisdictions.

Diane Feinstein introduced a bill in congress to ban Bump Stocks- the accessory that converted the Las Vegas shooter’s semi-automatic gun to an automatic, making it easier to kill more people, more quickly. We also send out action alerts to activate people when we need our legislators to hear from us. We need voices,  bodies and determination to stop this senseless cycle of violence.