As some of you may have read, I was a pretty awful vegan the first week I tried to switch my junk food-filled animal-based diet to a vegan diet. Apparently, Oreos and potato chips aren’t the best diet you can have, even if they are vegan. I felt slogged down and wanted to be healthier, but I kept getting so hungry between lunch and dinner that I would make poor (albeit vegan) choices.

Luckily, Mayim was able to give me some tips. Armed with her suggestions of different foods to try and advice to eat more frequently, I planned a menu for the week, went grocery shopping, and even prepped some meals Sunday night for the week. I also knew I was going to be busy and unable to cook every night, so I researched some healthy on-the-go or dining out vegan options. I was ready to kick my healthy vegan diet into gear! Here’s what happened…

I made a Fruity Oatmeal smoothie for breakfast and an Asian salad for lunch, both from Mayim’s Vegan Table cookbook. I drank coffee in the morning while making the smoothie, which I had on my way to work. Normally, I skip breakfast and can go until late in the afternoon until I get hungry. This day I was starved by the time lunch came around. The Asian salad was very welcome. I even had veggies and hummus for an afternoon snack to hold me over until dinner. Mayim wasn’t joking about that snack often thing. 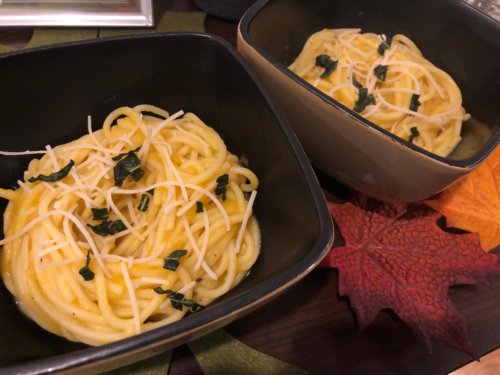 For dinner I cooked, Creamy Vegan Butternut Squash Pasta with Fried Sage from This Savory Vegan. It was delicious, but what a chore to make! I am not fond of cooking and spending over an hour on chopping and simmering and blending is not my idea of a good time. So was it worth the effort? Debatable. It did make a very large portion, so I had leftovers ready for lunch—but it made so much I wasn’t able to finish it within the week.

After dinner, I met up with a friend at a wine bar. I went to my go-to, Chardonnay, but the entire time I was drinking it, I couldn’t help but think, “Is this vegan?”

I made another smoothie for breakfast and had my leftover pasta for lunch. It was somewhat boring, but it did the trick. I had veggies and hummus as a snack. By dinner time I was tired; I had been out quite late the night before, and I didn’t have the energy to cook, so I ordered Thai yellow curry. Normally I’d get chicken, but I unenthusiastically went for veggie. And it was quite good! I didn’t miss the chicken; the cabbage and broccoli made it seem heartier.

The evening before I made overnight oats with Milkadamia milk and fruit I had on hand. I was hoping this would keep me fuller a little longer during the day since it was more carb heavy. I had pasta leftovers again, but at this point, I was starting to tire of it.

This is the day I realized I was going to the bathroom a lot (you know what I mean). I even had to go at work, which I’ve never done before. Normally, I only go every 2 or 3 days, but after talking to some people, I found out it is actually more normal to go every day! Who knew!

For dinner I ate at a restaurant called Cava, a fast-casual Mediterranean restaurant. While the menu said it had vegan options, it wasn’t 100 percent clear to me which individual choices were vegan. I got a mini pita, falafel, tahini sauce, and some greek style soup. The food was amazing, and I want to eat there more often!

I had overnight oats for breakfast again. However, I added way too much chia seeds by accident, which led to another bathroom at work situation. For lunch, I had a hodgepodge of food from the house, including veggies, hummus, crackers and olives. 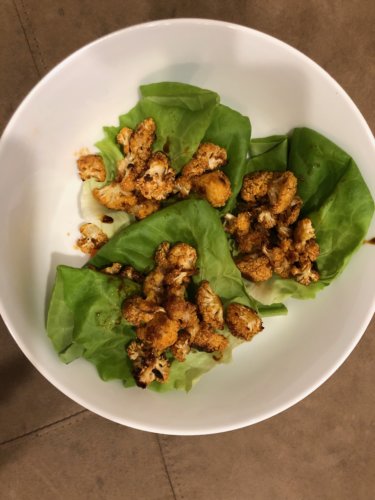 For dinner I had Spicy Korean Style Cauliflower Wings from the Minimalist Baker. I don’t feel like I’ll miss most meat products, but I do love Korean wings. I was hoping this could be a good substitute. While it was really yummy, cauliflower doesn’t seem like a true replacement of Korean wings.

RELATED: The debate on cauliflower rice

Breakfast was more overnight oats. I was out of hummus, which had become a lunchtime staple, so I rummaged around my cupboards and found boxed tomato soup I had bought months ago at Whole Foods. I had that with a side of veggies, and it was actually really filling.

For dinner, I was at a babysitting gig, so I ordered Mediterranean food. My dinner on Wednesday was so good I was craving more falafel and pita. The takeout place was not quite as good as Cava, but still a solid option.

I went out that night after babysitting and had vodka sodas. I was really proud of myself because I didn’t eat any fast food or pizza after leaving the bar like I usually would. I kept it vegan and just drank water!

Getting close to the end of my planned out week, I had a breakfast of fresh fruit and a french press coffee. For lunch, I had an avocado and cucumber sushi roll and a side of edamame and sweet potato fries. I wanted the sweet potato tempura roll, but after looking it up, I found out some tempura is made with egg. (Does anyone have a better go-to vegan sushi roll idea? Because I wasn’t super impressed with the avocado cucumber.)

That evening I went to a Halloween party without eating beforehand. There were a few tortilla chips on hand, but mostly just wine. When I got home at 1 a.m., the only food option open was pizza. (Yes, I could have made a salad or something, but I was not about to do that at 1 a.m.) I ended up ordering a cheese pizza—so at least I wasn’t eating meat, right?? It was so delicious… until the next day. I got very sick and have decided I might actually be lactose intolerant.

I’ve tried various eating plans over the years—whether it be going gluten-free or Whole 30 or sugar-free. Typically, when I fall off the wagon, I end my experiment and go back to my unhealthy eating ways. But since ending this article, I’ve continued eating vegan. This is partly because of my suspected lactose intolerance and the fact that meat hasn’t had the same appeal to me lately. Plus, I’ve had psoriasis since I was a child and it’s clearer now than it has been in a long time. But the main reason is I’ve always felt guilty about eating animals and it is so much better for the earth to eat vegan.

I may add back in eggs and possibly fish if I’m out at a restaurant, but for now I’m happy eating meatless. Before I add those things back in, I’m wondering, should I try the ultimate vegan diet: raw vegan? After feeling so much better on a “regular” vegan diet, I’m curious what would happen when I cut out cooked food altogether! Let me know in the comments what you think!