I have been trying to lose weight for some time now because I am over my normal weight by quite a bit. Every time I get into a workout groove, I get sick. Like, bronchitis sick. Asthma sick. “Refrain from exercise” sick. And when you can’t work out and you are sad that you can’t work out, food seems ever more tasty. Lots of it. And not always the “good” kind of food.

And so here we are rounding out the last quarter of this year and I have again been cleared for exercise. ManFriend and I decided to turn “date night” into “workout together night.” We couldn’t decide if we wanted to take kickboxing (a cardio heavy workout) or taekwondo (a discipline/technique/form/belt acquisition experience). And so, like the overachiever I am, we tried both. In one night. Back to back.

Now, I don’t reveal a lot about ManFriend to maintain our privacy, but let’s just say that ManFriend is in excellent shape. Like, he works out a lot and never gets sore, even though his work involves repetitive lifting and building and demolishing. I, on the other hand, have not done cardio in months. I have had several major stomach surgeries for hernias and complications with hernias. I have had two children and my stomach muscles never came back together properly.

When the instructor heard we were trying both classes, he raised an eyebrow and asked what our cardio routine is like. I didn’t lie. Neither did ManFriend. I took a deep draw off of my inhaler and off we went. I paced myself, something I typically don’t do. I usually go all out super aggro. It’s just my athletic style. But I was nervous to hurt myself with all of this momentum toward getting in better shape, and I also was afraid to embarrass ManFriend by hurting myself. I know, it sounds like a dumb reason to pace myself, but he makes me a better person in so many ways.

RELATED: How kickboxing helped one woman deal with her anger

I kind of kicked tush in kickboxing. I was shocked at what I could do. I rested when I needed to, but I didn’t need to that much. I was out of breath and I was sweating. But it felt good. I punched and felt like Sugar Ray Leonard, who my dad used to show me boxing on our little TV when I was a kid. I pictured myself graceful and fierce, with precision and power like Sugar Ray had. And Ali. When I bobbed and weaved, I felt suave and skilled. When I kicked, I was literally shocked that my body could still do that. After having two babies who tripled their birth weight in the first year of their lives, I have felt worn out for 13 years. Kicking high and strong made me feel capable again in my physicality.

I’ve never worked with a punching bag or kick bag before, but I’ve always wanted to. I loved the satisfying sound when your leg makes contact with the bag. I learned to do front kicks, side kicks and—the most exciting for me because they’re pretty even if you don’t do them perfectly—the roundhouse kick. Mostly, I loved getting to have an aggressive physical outlet. I am a woman prone to high testosterone displays, and I literally made this sound and physical set of gestures a few times after a round of particularly intense kicking. You know, the thing wrestlers do after taking someone down hard. I did that.

After an hour of kickboxing, I was winded but ready and excited to try taekwondo. My sons go to taekwondo and they love the athleticism and discipline, and their instructor is a no-nonsense, really wonderful man. Adults take classes from him, and so I decided to become a student.

Taekwondo involves bowing and answering the instructor with “Yes sir” and “No sir” and “KIYAI!” when you complete exciting moves. It’s very difficult for me to try and remember all of the things I learned, and ManFriend possesses experience that places him as a black belt, but he has started at white again so we can do it together. (Awwww.) My sons watched from the benches I usually watch them train from, and they laughed as I started learning the basic punches, kicks and blocks which they have mastered for years. I did not feel as coordinated as I dreamed I would be in taekwondo, and if I had not had them to watch for years, I would  have been somewhat lost. But since I had some of the Korean vocabulary already floating in my head, it wasn’t so intimidating. I didn’t get my dobok yet, so I was also in my regular workout clothes which made me feel out of it. I was the only non-black belt female in the class, so the competition with other women thing was not an issue. One less thing to think about!

RELATED: Sign up for your own workout classes with a free month trial of ClassPass

I am extremely competitive. I compete when there is nothing to compete for. I’ve always been athletic. I was a classically trained ballerina. I was a tap dancer. I did jazz and gymnastics. I played racquetball and had a terrible temper if I lost. In college, I was known to throw my racquet when I lost. Not a good set of traits, I know, but this is me. Very very competitive. I even compete in yoga classes. If there isn’t a competition, I’ll make one up in my head to have something to be better, faster and stronger at.

I definitely felt competitive in these classes, but it didn’t overwhelm me. I want to be better than ManFriend, even though he literally works out every day, already has trained in taekwondo, and is a man with far more muscle than I. I compared myself to the women in my kickboxing class, but tried really hard—and succeeded—in staying in my place and not letting my mind wander. Did anyone have the fat on their body I have? No. Maybe they used to, but I doubt it. Some wore makeup and I felt like it was a wonderful coincidence that I had been filming that day and had not had time to remove my make-up, so I kind of felt pretty even when comparing myself to these other women. I know that’s not a healthy ideal, but it’s my reality and I am just being honest.

Speaking of makeup, when I went to my second class, I was not wearing any. I figured, “What’s gonna be the big deal?” But turns out, I had a significantly worse time looking at myself in the mirror. I felt really frumpy and dumpy in my dobok, and I just was not having any good feelings about myself every time I glanced in the mirror. I happened to be filming the morning of my third class, and I didn’t take time to remove my makeup. And so, class No. 3 had me kicking butt and actually thinking I looked kinda cute in my dobok. I think I’m on to something… And even though I sweat so much that I needed a sweatband, I still think I looked pretty good post-workout. False lashes and everything pretty much intact! 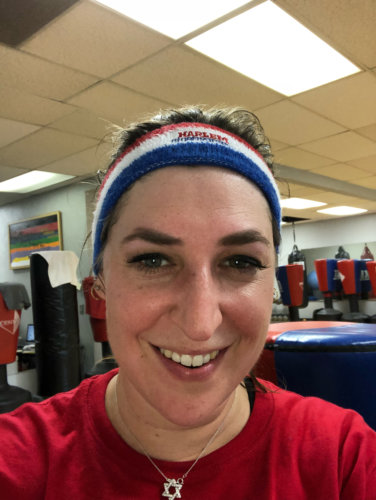 False eyelashes made it through the workout!

I typically exercise in a “modest” workout skirt with leggings attached. However, I decided to invest in a pair of proper satin boxing shorts that come to the knee. I feel very self conscious in pants and shorts since I don’t wear pants except to sleep in and my curves look silly in shorts unless I am feeling VERY adventurous. Buying something silky and comfy felt like a way to nurture my scared self. I also bought beautiful synthetic (vegan!) sparring gloves and wraps for my hands. My dad was a huge boxing fan, and I’d like to think his spirit is being elevated as I learn to box. It’s kind of cool.

And of course, I had to buy the teeny tiny boxing gloves to hang from my rearview mirror. Because they are very tiny and very cute. A kickboxer has to accessorize, after all.

I continue to take both classes, albeit not always two back-to-back since that might eventually wear my body down unnecessarily. I have been so impressed with what I can do as a mom of two who is not in great shape. My determination, my passion for fitness, and my apparently very high testosterone will sustain me as I work hard—very hard—to get back in shape.