I always loved having my period. Not because it made me a woman at 11.5, or because it kept me out of gym (it didn’t), but because it connected me to both my body and to nature. My period was consistent and reliable, and, during my teenage years, there was nothing and no one like that in my life. In middle school and high school, my parents were divorcing amid issues with drugs and infidelity, so it was my period that faithfully kept me company for over 40 years, something I only realized when, at the age of 52, it stopped visiting regularly.

Of course, in the beginning, my period embarrassed me. There was the time a boy asked to borrow a pen in math class, and I dug into my purse to pull one out, only to hand him a tampon. We looked at each other, both mortified and dumbstruck.

My period was also dramatic. Forget panties and jeans. I bled onto mattresses and car seats. On the first day it arrived each month, I bled so much I couldn’t leave my house for an hour or two. Then, the overflowing dam would subside and my period would become a regular creek. Low iron levels? Yes. Crazy mood swing behavior? You betcha. In fact, my period vacillated between being a loyal friend and the bad boy that I couldn’t forget. I loved my period despite its neediness and intensity. Like all bad boys, my period would disappear at an unexpected moment, but, like a good friend, it always returned.

It could inspire humor, too. Once, when I was married in my 20s, I sent my then-husband out to buy me pads. He came back with extra-long oversized maxi monstrosities. “You’ve been to the neighborhood,” I said to him. “You know I don’t need anything like this.”

“But they have wings!” he said, thrilled, I think, that they might fly away from right between my legs.

Of course, nothing that astonishing ever happened. No, my period just showed up every 28 days, and, over the course of 40 years, it was only late two or three times, usually because I had traveled or been sick. It even came back pretty quickly after I had my son. I was happy to see it and I wondered if it had missed me, too. Over the course of my lifetime (about 625 months), my guess is that I had my period for about 480 of those months.

Then, in March of 2015, I had my period, but it didn’t come back until May. It faithfully came again in June, but then disappeared once more until October. Over the next eighteen months, it sometimes took six weeks to return, other times eight or twelve weeks.

Eventually, it didn’t come back at all. If that sounds like a line from a kid’s book that is supposed to introduce the concept of “disappointment” and “how life will let you down,” you will understand exactly how I felt. I didn’t want to get older. I didn’t want to change, and, I did not want to say goodbye to my period. Of course, I wasn’t going to have another baby, but I was going to miss my period.

Sure, my period could be dramatic and a lot of work, it was messy and would show up when I was on vacation or with a new man, but my period had been a good friend, and it was also unbelievably sexy. Ultimately, my period was all about sex, and I loved sex. I was afraid that if I lost one, it would mean that I would lose the other. One of my co-workers even told her husband that she was closing up shop once she stopped menstruating (she was kidding, but still, I couldn’t believe she had uttered those words even in jest!). 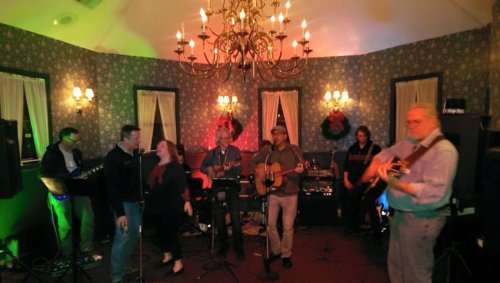 Then, on December 31, 2016, my period came back for one last visit. Yes, it really was on New Year’s Eve. I was going to a big party, all dressed up and ready to sing with a band, but my fancy plans were interrupted with all the worst aspects of my period: crying, cramps, exhaustion, and a whole lot of blood. I sensed that, after six months without an appearance, this last visit was just that, a final get together with my old friend.

So, I left the party before midnight and went home with my period. I know. It sounds kind of pathetic. No unmarried 53-year-old who was getting a pretty good amount of attention should leave a party, but I don’t regret it. I remember it fondly because, just like we remember our first periods, I found it important to honor my last.

Now, my relationship with my body is different. All of the things that you hear will happen during menopause did: more dryness (hair, vagina, skin), less perkiness (breasts, belly, thighs), and, on the good side, mood stability. I remain calmer in the face of challenge and insecurity. I think more clearly (my memory is going, but when I do remember something, I can think clearly about it), and I really do feel better about myself even without my fertility. I’m not super horny like I used to be every month (for forty years; a pretty good run!), but, on the other hand, I’m pretty sure I’m not ever going to do the walk of shame again (okay, I haven’t done that for decades, but, still…).

One thing I’ve noticed, as I’ve gone from a pretty young thing to a woman of a certain age, is that some men still find me beautiful, even though I’m not lovely in the way I once was (you don’t know horror until you find a gray eyebrow hair). I think it’s because women my age are redefining what menopause means. It doesn’t have to mean no sex–although it does mean lubricant! It doesn’t mean have to mean getting old, and all the negative aspects associated with it–in fact, I’m starting a new career, and my friends are going back to school and competing in triathlons!

Frankly, it’s about time for a change.