The 1970’s sitcom One Day at A Time starred Bonnie Franklin as the white divorced mother of two teenagers played by Mackenzie Phillips and Valerie Bertinelli. The updated version on Netflix features a single mom with two kids, but this time the family is Cuban and living in Los Angeles, with Rita Moreno starring as the abuela. A not so handy Schneider from Canada manages the apartment building they all live in. Even though it premiered on January 26th, with season 2 recently landing on the streaming site, I still can’t stop talking about it (And hopefully if enough people find out about the show, we’ll be in store for a season 3).

Just like the original, the remake is not shy about taking on pressing social issues. With Executive Producer Norman Lear at the head, it’s not surprising that the spirit of his original version burns bright in the update.

Now we have the Alvarez family: Single mom Penelope (Justina Machado), a former soldier living with PTSD, anxiety, and depression, her mother Lydia (Rita Moreno), who left her beloved Cuba to escape Castro’s dictatorship, and her children, perfectionist lesbian Elena (Isabella Gomez) and the sauve, stylish Alex (Marcel Ruiz). This is the new face of the American sitcom family and I am 100% here for it.

Representation matters, and with this revamp, Netflix is providing a new, different version of the American family, one that so many Latinx Americans can relate to. I know many of my Latinx friends have shared how much One Day at a Time means to them, and while I can’t speak to that particular connection, I still found myself on that small screen. I cried right along with Penelope in the recently released second season when she broke down after going off her anti-anxiety medication without talking to her doctor. She was in a new relationship, things were going great, and she just wanted — for once — to feel “normal.” So Penelope stopped taking her meds, and the fallout that occured was one that was far too familiar to me. Actress Justina Machado plays these dark, fear-laden scenes with such grace and empathy, and I am so thankful that she is portraying mental health in such a poignant and relatable way. It’s rare to see a mother with mental health challenges portrayed as realistic, and not just as a prop for sympathy, scorn or outrage.

Beyond ethnic/racial and mental health representation, this show goes there on so many more topics: sexuality, immigration, white privilege, classism, homophobia, gun control, and more. But, don’t fear — it doesn’t hit you over the head with these heavy issues either. Nothing is forced, fake or patronizing. Instead, you’re laughing one moment, blinking back tears the next, and “awww-ing” a moment later, just like any A+ sitcom should have you doing. 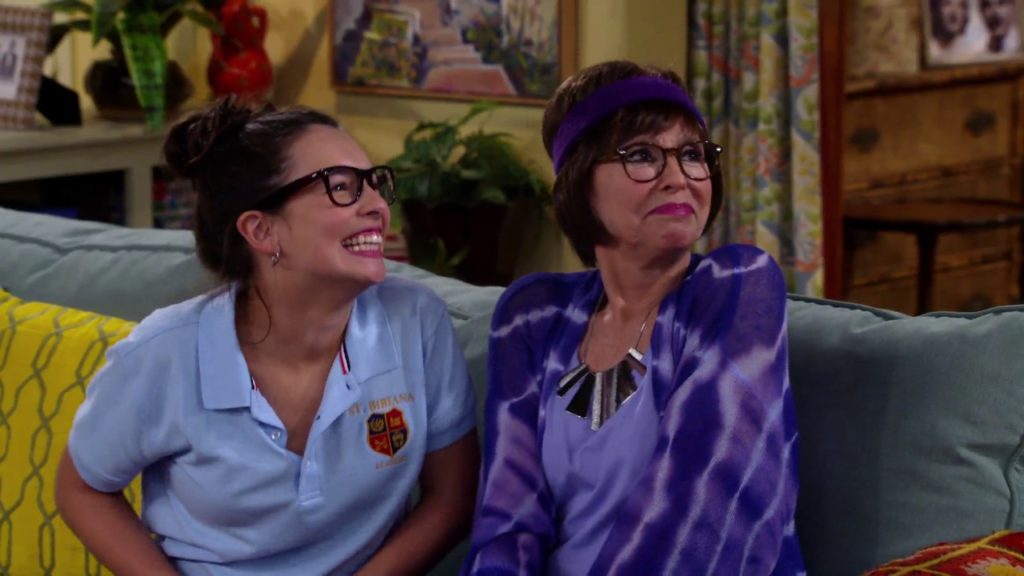 I grew up watching shows like One Day at a Time with my grandpa Phil. He was an immigrant, coming over from Germany with my Bubbe Esther and my mother, after surviving the horrors of the Holocaust and multiple concentration camps. Despite not being very vocal about current events, he really enjoyed these types of shows that had political and social messages woven through them, like another shared favorite, All in the Family. Grandpa Phil was my introduction to the original show, and I’d like to think he’d also enjoy this new take on the classic.

Put simply, I highly suggest you check out this show. It’s not everyday that you find one you connect so strongly to, and I’d like to see more seasons. So, please, give the show a chance! Watch a handful (4 to be exact) episodes or add it to your “My List” on Netflix. There is already a dearth of quality shows with multiple representations out there. Please support the good ones that are already out there!

Momma Ain't Too Proud To Beg. I LOVE this family on screen & off. Representation matters @MikeRoyce & I have a lot of stories left to tell! 'One Day At A Time" Co-Creator Begs Fans To Watch "Four Episodes In The Next Few Days" https://t.co/z7lgBwpnBT Thanx @decider @OneDayAtATime

Whether you’re a mental health challenged mama, Latinx, a gay teen trying to find your place, or just enjoy quality sitcoms, I recommend One Day at Time on Netflix.