Isn’t it beautiful when life surprises you in wonderful ways? I mean, I’m 43. I feel like I’ve kind of been through the ringer of life. Like, once you can no longer comfortably jump on a trampoline because you’ve had babies, and Jell-o shots no longer sound like a good idea, you’re kind of past the point in life of being surprised about most things, right?

Well. Let’s just say that by some stroke of magic and impossibility I ended up at Pokémon Detective Pikachu movie on Mother’s Day. By all indications, I should have never been there. I had hosted a brunch for a few friends and my mom earlier in the day, and I was exhausted. My boys and I had plans to go to Disneyland the next day, and I still hadn’t packed for the work trip I had to go on in two days. I had no business going to a movie.

However, something drew me in. Like a force of nature, I needed to see this movie I knew nothing about. Actually, I knew literally one thing about Pokémon, and one thing only: Grown adults walk around with some app on their phone looking for cartoon creatures. I never had Pokémon cards. I didn’t even know there was a TV show. Nothing about Pokémon had ever interested me or made sense to me, and I was fine with that.

I don’t know what the heck it was, but I can only compare it to the way my father(z”l) described meeting my mother when he was 17. He said it was literally love at first sight, and forgive me for comparing my parents’ 53 year love affair to me and this Pokemon situation, but I JUST DID. 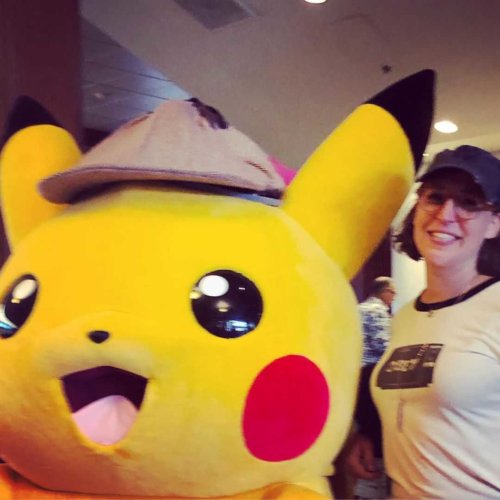 Me and my main squeeze.

The world of Pokémon in Detective Pikachu involves these cartoonish creatures (aka Pokémon, literally “pocket monster” in Japanese) living among us. It felt very X-Men, which I’m super into, so that was already kind of an in for me. But here’s the thing: this movie was really funny. Like, grown-up laughing funny. The lead character, Tim, is this really terrific kid who is played by a wonderful actor (Justice Smith) . I love that he looks like a real person, and not some generic, sterile, kid actor.

We follow Tim as he searches for his father (his mother has recently died). Honestly the movie had some sad moments where my younger son and I held each other real tight. Tim ends up using his father’s detective partner (Pikachu!) to help him along the way.

The voice of Pikachu was one of my favorite things. The whole time I was thinking, How is it that I’m kind of falling in love with this character? (There’s a hilarious reason why. Keep reading.) The writing was sharp and the visuals were really fun.

Lucy (played by Kathryn Newton), aka the sidekick character to the lead, is a potentially annoying female archetype who was not annoying to me at all. She’s feisty. She’s tough. She’s actually tougher than our lead male, but not in a “Girls Rule and Boys Suck” way. She’s a young intern trying to get her big break in journalism —very reminiscent of so many comic book types—  and along the way, she helps out Tim with a lot of skill and sass. I loved her.

My FirstBorn felt Lucy was a bit “too” strong, in that it made Tim look weak; I pointed out that Tim also had his strengths, and we agreed that movies need to show that men don’t always have to be the toughest and most aggressive to be powerful and lovable; women can be sensitive and gentle and clever and so can men!

My favorite Pokémon in the movie, however, was the one that reminded me of myself. His name is PsyDuck. He is very anxious and needs to be kept calm, which he does by saying “PsyDuck” constantly so he won’t explode with anxiety. Next to lemurs, which I consider the animal embodiment of me, I FOUND MY THING. I am PsyDuck.

Long story short, I loved this movie. And the big reveal of who the long lost father is made me literally gasp audibly. There are not many men I gasp for when they appear on screen, but I am such a dodo that I did not recognize the voice of Pikachu throughout the movie until he was in my face. Ryan Reynolds. Duh. When he was revealed, I swooned so hard. Makes perfect sense, because I absolutely love his sense of delivery as an actor and Pikachu was him. He was Pikachu. Wow.

I left the theater a changed woman. My first thought —precisely what the creators of Pokémon probably hoped for when they first created it— was that I needed to buy everything with Pokémon on it. I sounded like a crazed 4-year-old as we left the theater and I grilled my kids: “What can I buy? Is there a store? I want a T shirt. I want dolls. I WANT A MAYIM SIZED PIKACHU TO HOLD ME AT NIGHT.” And so on.

I found a new thing I love. I don’t know what will happen now. I kept saying “PsyDuck” as we made our way through a throng of people, at one of the most crowded places to go on Mother’s Day. Again, I would never go to this place, yet something drew me there.

That thing was Pokémon, and I am so thrilled I followed my instinct. I found a new thing at 43. Stay tuned. PsyDuck.