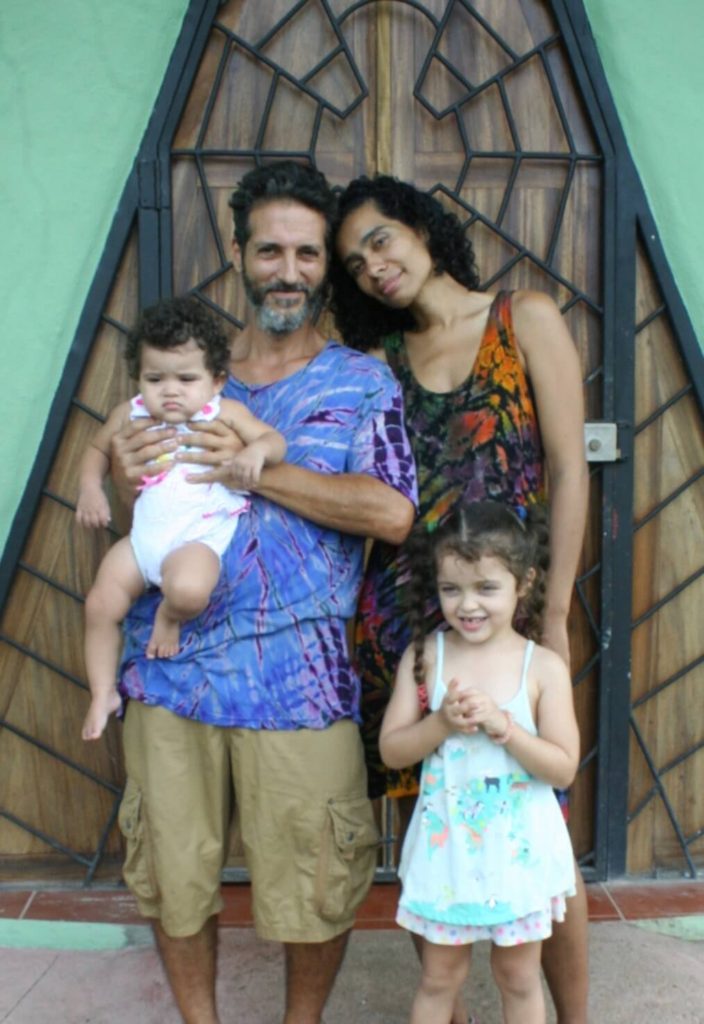 From the minute Mayim found out that there was a Jewish-Muslim couple living in Costa Rica in an eco-village focusing on environmental issues, she knew she had to find out more. She spoke with Hooma Multani and Jamey Breinberg about their work with URI – the United Religions Initiative, their passions, and raising “Jewslim babies.”

Mayim Bialik: Where exactly are you? And what is an eco-village? How does it work?

Jamey Breinberg: We’re in Costa Rica, on the Pacific Coast in a town called Villareal just outside Tamarindo which is one of the most popular tourist attractions in all of Costa Rica.

Hooma Multani: We are part of an organization called URI, a network that is a cooperative circle. [According to the URI.org website,  URI is “a global grassroots interfaith network that cultivates peace and justice by engaging people to bridge religious and cultural differences and work together for the good of their communities and the world.”] We have a particular focus on environmental issues ,so we’re helping build an eco village which will be used as a place to give apprenticeships and workshops for people who want to learn how to live off the grid, farm their own food, build their own shelters, and secure their own water. We believe that teaching these basic skills will help people broaden their general perspective on the world, and I think Jamey would agree with me that this can be a tool to create a global peaceful coexistence. When there is conflict and when people are competing for natural resources, if people could see that there is abundance, our hope is that people would see that there is no need to compete. I think it goes with this idea of looking out for your own needs, and broadening that to your own family, to your own community, and to everyone, and not just people but all living things within the environment. If we could acquire these skills the rest would come organically.

MB: Tell us a little about how you met and how your lives became entwined in this common goal together.

HM: Well, we actually met on a reservation in Northern California, I was working for the Bureau of Indian Affairs, and I was studying Fire Ecology, compiling research and analyzing the traditional uses of fire practices of Native Americans.

JB: I had been looking for about 30 years as an artist to find a way to combine sculpture with architecture, and after a number of hurdles, I found the perfect medium to work in, which is clay; earth. It can be any color, shape, any texture, I can do anything I want with it. Earth is the most free and abundant green material.

HM: Jamey is leaving out an important piece of his story. He actually had gotten cancer from living in a moldy house.

JB: I was living in a house in Santa Rosa, California, where the mold had come right through the paint and I didn’t realize how dangerous that was at the time. I was spending my life trying to build breathable clean houses without any allergens and toxicity after realizing what a toxic mess our houses are and how unsustainable they are both financially and ecologically. I got Hodgkin’s disease, my girlfriend at the time had ovarian cysts, and our landlady had breast cancer. The way we build houses is literally killing us, bankrupting us, and destroying the environment.

After my treatment for Hodgkin’s, I started working at a Native American reservation because part of their heritage that was stolen from them is their land. They were put on reservations and they were living in trailer houses and in really crappy sub-standard housing that has become the status quo. One day, I stumbled onto an abandoned building that used to be a tribal council building and found a whole collection of books that were completely mistreated just laying on the floor. One of these books happened to be “Patterns of Indian Burning”  which was this really rare manuscript, a thesis from a student from Vassar University from the 1940s.

I met Hooma at a blackberry festival in this reservation town of 2000 people. She was as interested in reading as I was; she had this whole pile of books that she was carrying from an environmental book store that was going out of business. I got to talking with her, and that’s how I found out the project she was working on.

She looked very religious; honestly she looked kind of like a nun – she had this shmatteh [Yiddish word meaning piece of cloth or a rag] on her head – her hijab – and I was drawn to her because she was a reader, and she seemed super friendly. There were a lot of things I wanted to talk to her about.

MB: So, Hooma you were raised Muslim, and you were wearing hijab when you met Jamey; tell me about yourself, and do you still wear hijab?

HM: I call myself Blackistani since my father is technically Indian, but he was given [US] citizenship, and my mother is African American from Chicago. I was born and raised in Los Angeles.

JB: I was born in Brooklyn but raised in Staten Island.

HM: I wore hijab when I first got to Costa Rica and everyone was kind and friendly.  I took it off and nothing changed.  Twice I was wearing my DIY “burkini” at the local beach and the hijab part was pulled off by a sudden freak giant wave in otherwise calm water. Then, another time, I was riding my bike and a strong gust of wind whisked my hijab away.  I feel like God was telling me I am off duty here. In the US, I felt the need to represent my community; to dispel stereotypes and be sort of spokesperson for my faith.  In Costa Rica there was no such need for this “job.” Costa Ricans are open, tolerant and kind to everyone anyway. There seemed to be no prejudices I needed to overcome with regard to being Muslim. To be perfectly honest, it never sat well with me that there is a religious emphasis on women dressing modestly instead of simply teaching men to behave themselves. I noticed how here women dress very skimpily and yet the country has amongst the lowest cases or violence, sexual or otherwise against women in the world. Costa Rican men seem to know that women often dress in less clothes because it is hot,  not because they are “sluts”. The traditional clothes worn by the first inhabitants were g-strings! Some people keep this tradition alive.

As a result of modesty being more of a personality trait than a style of dress, I often breastfeed in public. It is so common here. I don’t even think about it. I just pull out my boob in public. I have never gotten an unclean glance.  Instead men, women, and children offer me more comfortable seats, pillows and even fan me and the baby while I’m nursing.

MB: One of my favorite parts of the e-mail that I originally saw from you was that you have a Jewslim baby?

HM: We have a five-year-old and a five-month-old! Two Jewslim babies!

MB: Could you explain a bit more what’s involved here in helping your children understand your respective faiths?

HM: We decided to raise our children with a sense of universal morality rather than indoctrinating them with any particular faith. I think its important for them to learn about the more positive aspects of religion – Islam and Judaism in particular since that is our background, but I want them to readily reject blind faith and dogma, and be willing to abandon any custom that goes against what they feel is right: after all, our faiths say we are not allowed to get married in the first place. According to religious authorities, our Jewslim family is not permitted to exist. Also, there is a lot of sexism in religion, unfortunately. I think its harmful to girls and boys, and society as a whole to teach many of the religious stories that subjugate others.

MB: How have your families reacted to your involvement in URI and your marriage to someone from another faith?

HM: Our families are both very supportive and think it’s wonderful to do much needed interfaith work. Jamey’s mom often comments that we have the same faith. Our personal values are very much aligned. We were both outliers in our respective communities, so it’s really fitting that we found each other.

MB: How do your respective faith backgrounds impact how you participate in local culture?

HM: Costa Rican cultural is very physical! People always want to hug, kiss and pat us.  This is something awkward for a lot of people from the US and Canada alike, but especially for me coming from a Muslim background where men and women are not suppose to have physical contact; I often turn into an opossum when local men greet me with the traditional kiss on  the cheek and warm embrace.  It’s actually a hot embrace!  We’re in the humid tropics and so we’re always dripping with sweat.  And even that is no deterrent for the loving locals.

MB: You have left the large cities behind; you have left the machine of capitalism and all its trappings that is so normal in the United States. How have you seen your life change? How would you convince other people who might be interested in that kind of change to join you in this very different life?

HM: I feel like the major change that’s noticeable to me is that people are still friendly and kind; it was quite shocking to me when I first moved here. Sometimes people will do something that’s nice for me, and I’m just so shocked that I can’t even muster the words “thank you.”

When I was pregnant in the United States, people were very rude to me. I would go into a crowded room and there would be no seats, I would ask someone “Do you mind if I sit down?” And they would say “Yes, I mind. I was here first!” I just kind of accepted it as normal because it was my experience. I knew that I wanted to be in a culture that was more functional. I was increasingly seeing a lot of mean spirited behavior in the United States politically as well.

When I was pregnant [with my second child, after relocating to Costa Rica], people would go out of their way to help me. Before I got pregnant with my second child, my bike was my major mode of transportation and I’d have my daughter in the back. People used to literally run towards me, and I didn’t know what they were running toward; they were coming to help stabilize my bike for me so that when I got off, they could help me take my daughter off. I remember there was once a soccer game near where I was trying to go up a steep hill with gravel, and a group of these soccer playing guys ran out and helped me push my bike up the hill. Things like that happen all the time and I am just flabbergasted.

JB: We both realized we’d had enough both of the politics of the reservation and the United States as a whole. Politically we were super frustrated with the United States. Part of our tax dollars were going to bomb people in foreign countries.  We were willing to try almost anywhere else to not be a part of that.

MB: I really admire your commitment to the environment and to building sustainable lives. What an inspiring story! 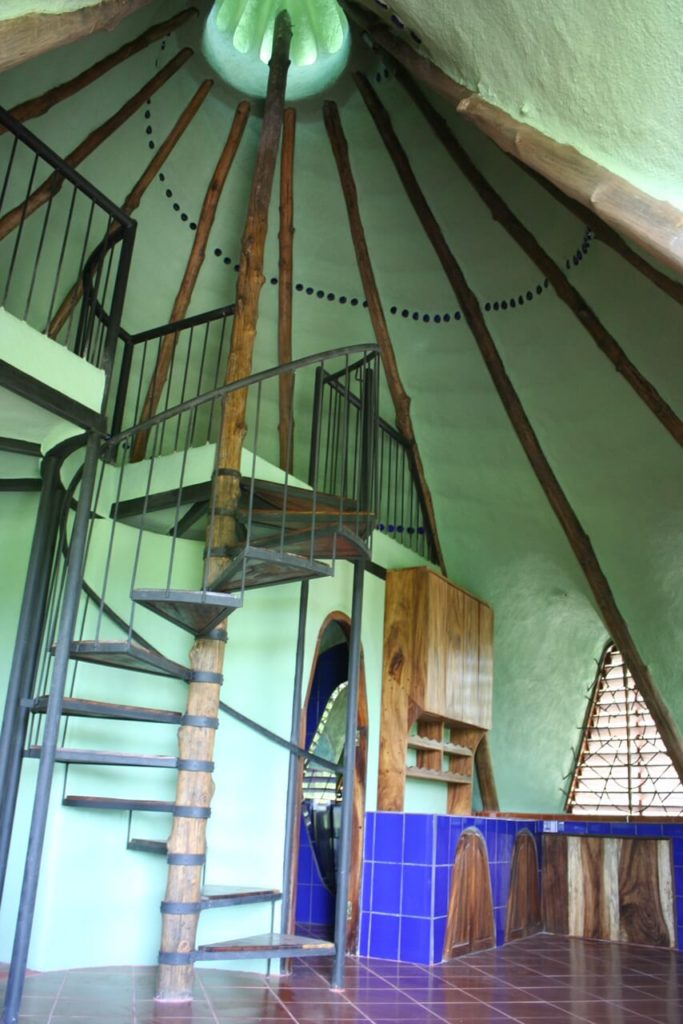