Just like the heroine she depicts in the new novel Leia, Princess of Alderaan, Claudia Gray is a rare pioneering woman in the Star Wars universe, which is still often perceived to be a “boys only” club. Even with the female-led resurgence of the Star Wars franchise in recent years, represented by heroines such as Rey on the big screen and Sabine Wren, Hera Syndulla, and Ahsoka Tano on the animated series Star Wars Rebels and The Clone Wars, a small but vocal subset of the Star Wars fandom insists that the galaxy far, far away is no place for a woman.

And yet Gray, a best-selling novelist and a lifelong Star Wars fan, has easily become the most beloved author associated with the Star Wars universe. Her 2015 novel Lost Stars is a favorite of fans of all ages despite being billed as YA fiction, and Bloodline, which follows Leia Organa as a senator in the years leading up to the events in Episode VII: The Force Awakens, is a powerfully nuanced political thriller mirroring all of the social complexities of our own universe – and featuring a powerfully nuanced female protagonist.

Now, in Leia, Princess of Alderaan, Gray once again paints a portrait of everyone’s favorite self-rescuing princess, as a 16-year-old Leia Organa must complete challenges of the mind, the body, and the heart in order to assume her rightful place as the heir to the throne of her home planet, Alderaan. She also begins to grapple with the larger evil that has ensnared the galaxy, and we get to witness her first steps towards becoming the bold, brash Rebel Alliance leader iconically portrayed by Carrie Fisher in Episode IV: A New Hope. Indeed, as Claudia Gray and Princess Leia continue to prove: Star Wars is a girl thing too! 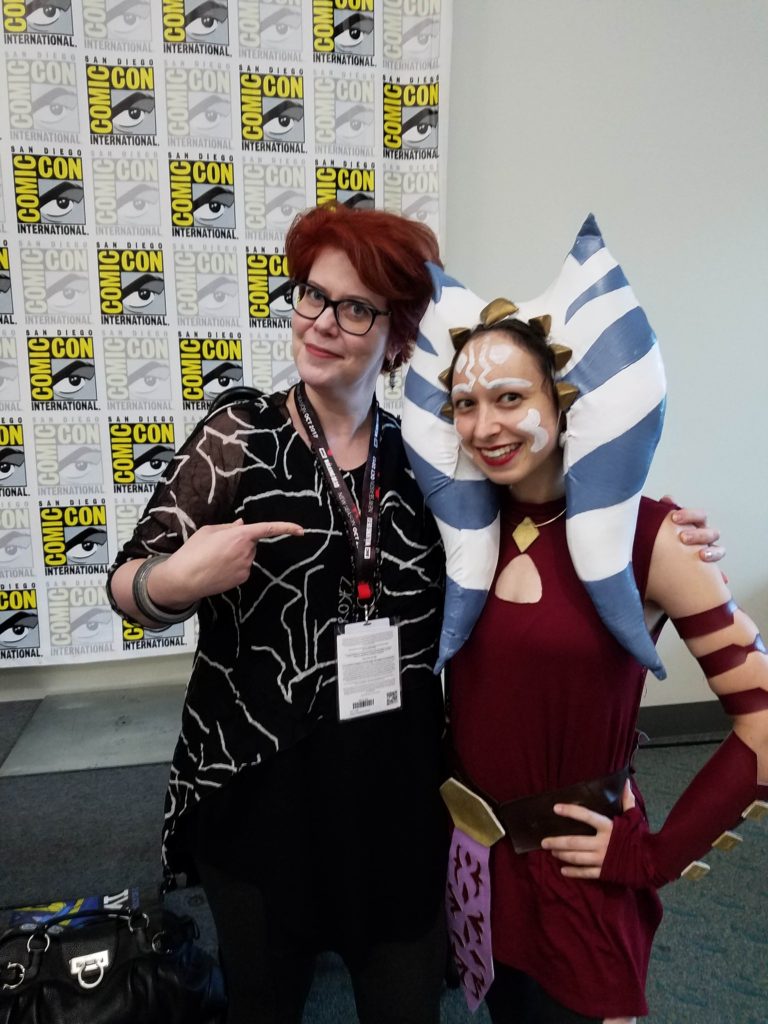 So read on for the interview and don’t forget to watch our video about the book and the iconic character here.

GN: When did you first become a Star Wars fan and how did you get involved with writing for the Star Wars universe?

My Star Wars story isn’t a very colorful one. I was seven years old in 1977, which means I saw the movie over and over again in theaters and played/imagined it throughout my childhood. I can remember a time before Star Wars…but only barely. When I was a kid I had action figures and playsets; when I was a teenager, I put Return of the Jedi posters up on my doors. When I was in my 20s, the Timothy Zahn books [introducing the villain of Thrawn] were released. Then came the prequels. Then more books. Etc. So there’s no big dramatic story behind it, which is maybe the fate of the lifelong fan. Lucasfilm publishing reached out to me in 2014, asking if I’d be interested in writing a YA novel set in the Star Wars universe. Like I’d ever say no to that!

GN: Lucasfilm is very involved with shaping the narratives of these books. How much story/character guidance are you given ahead of time, and how much is left to your own creativity?

Essentially, a book gets started when someone at Lucasfilm publishing gives me a prompt. For LOST STARS and LEIA: PRINCESS OF ALDERAAN, that prompt was only a couple of lines long. For BLOODLINE, it was about a page and a half, mostly to fill in the political situation pre-Episode VII. From there, it’s my story to write. I submit outlines for approval, which lets them tell me if I’ve inadvertently tripped over canon in an upcoming book/movie/tv episode. But I have a lot of autonomy in telling the story.

GN: With a book like Leia, Princess of Alderaan, you’re obviously confined by future events in the timeline. Do you find that this limits you creatively, or does “filling in the gaps” provide its own type of creative challenges? Is it more emotional knowing that Alderaan is doomed?

“Filling in the gaps” is the most fun part! I’d always wondered what Alderaan was like, and wished we’d gotten more of Bail and Breha Organa in the prequels. So the chance to bring them to life was irresistible. Leia’s later roles in the Rebellion and Resistance just gave me more to work with. If she’s already a major leader at age 19 (as she was in Episode IV), you know she didn’t start slow!

GN: How do you approach writing L:POA’s Princess Leia vs. Bloodline’s General Leia?

The Leia of L:POA is already smart and driven, and politically aware—but she’s not a Rebel soldier yet. She hasn’t given difficult orders; she hasn’t seen friends die. She’s still figuring out her own political philosophy, and who she is as a human being. So she’s a little more innocent, more inclined to see things in black and white. The Leia of BLOODLINE is a woman in middle age who remains a great leader and hero…but has learned that the fight against darkness goes on forever. She has a good life, but it’s not exactly what she would’ve chosen for herself. So there’s that awareness of compromise, of vulnerability. But don’t think for a moment that the fight has gone out of her. Never!

GN: Leia is obviously an iconic feminist character, but she is not without her flaws. How do you approach writing such a multilayered character? Is it important to showcase our heroine in a different light?

Honestly, I don’t think I’m showing Leia in a different light. Her quick temper and tendency to judge people quickly (for good or for ill) are very much on display in the original trilogy! That’s one reason we love the character so much: she isn’t some ice princess or happy-go-lucky ideal. It’s the flaws that make her human.

GN: In Bloodline, Leia finds out that after she strangled Jabba the Hutt (in “Return of the Jedi”), she became known as “Huttslayer.” How does this title reflect back on a scene in the original trilogy which is still pretty contentious?

It was more an attempt to complicate/add layers to that scene with Jabba—to say that there’s more than one way to look at it. Leia never calls herself Huttslayer, and never would; that kind of braggadocio isn’t her at all. But I wrote that there are some in the galaxy who look at that scene and see not a slave girl but a killer. Leia herself sees that incident only as a dirty job she had to do.

GN: Some have pointed out that moments in this new book echo some things percolating in our world’s politics.Do you get inspiration from real world politics, or do you operate solely within the Star Wars galaxy?

I try to work only from the politics of the galaxy far, far away. Of course, there are going to be some parallels, just because of the reality of human nature. But I mostly try hard to work around any real-life politics.

GN: All three of your books – Bloodline, Lost Stars, and Leia, Princess of Alderaan – showcase the grey areas that pervade both politics and war, including moral quandaries. Why do you think these nuances resonate so much with fans? And in Lost Stars and Leia, did you feel like you had to reign this in for younger readers?

Star Wars, to me, is more than the average “cinematic universe”—it’s modern myth. It’s legend. George Lucas is one of the great world-builders of all time. So when you see these movies, read these books, you can’t help but imagine what it would be like to live in that universe. It feels so real, so complete. So I think people are eager to delve into those murkier moral quandaries for that reason—it makes the world more real. While the movies are for the most part still the classic tales of good versus evil, the books/movies/comics get to delve into the thornier stuff. And no, I never feel like I have to tone that stuff down for younger readers. If anything, I think younger readers are even hungrier for that than older ones.

GN: Both Lost Stars and Leia, Princess of Alderaan are technically categorized as Young Adult novels, but I know of so many non-teenagers who adore these books (myself included)! Why do you think that is? Do you write differently for adults vs. for teenagers?

GN: Leia wants to be taken seriously and not looked upon as “cute” or “pretty” – how important is this to Leia’s character?

Leia does resist being thought “cute,” but that has more to be with cuteness as part of being young, immature, childish, etc. She’s working to establish herself as heir to the throne and an adult in LPOA, so of course she’s going to push back against any “kid stuff.” Luckily, as a child I experienced no pressure to conform to the princess mold and prepare myself for the throne.

GN:What was it like getting to write about Breha and Bail Organa, two fascinating and inspirational characters so key to the Rebellion, and so near and dear to Leia’s heart?

Writing Leia’s parents was one of the joys of the book. Bail Organa is such a storied character—such an incredible hero of the Rebellion—but he’s usually on the outskirts of the narrative. Meanwhile, Breha has been all but invisible. So I actually got to create her almost from scratch. The good people at Lucasfilm and I both agreed that Breha shouldn’t be some passive background figure, but a leader in her own right. In some ways I feel like LPOA is as much a Breha and Bail story, just told through their daughter’s eyes.

GN: With the loss of Carrie Fisher this past year, this Leia-centric novel carries additional weight. Did her loss make an impact?

LPOA had already been plotted out and outlined before Carrie Fisher’s death, so that didn’t affect the overall narrative. [But t]hat information definitely affected my writing process. It’s a sadder book, in some ways, but in ways that I think make the story stronger.

GN: How – if at all – did the female characters Rey (“The Force Awakens”), Jyn (“Rogue One”), Ahsoka (“The Clone Wars”) and Hera and Sabine (“Rebels”) help shape the current moment in which our princess returns to us through this book?

I love all those characters, but I feel like the current flows in the other direction. If we didn’t have Leia—strong and fierce and funny, refusing to be a damsel in distress back in Episode IV—we’d never have gotten to have Rey, or Jyn, or Sabine or any of the other awesome female characters we have today.

GN: What’s your favorite scene you’ve written in any of your Star Wars books?

Probably it’s a scene in LOST STARS in which the main characters talk to each other via hologram. Each one believes the other person agrees with them—but they’re completely wrong about it. They think they’re planning a life together, when really they’re outlining two totally different life paths. That was tricky to write, which made it even more rewarding.

Of film characters, it’s Leia, of course! Of the original characters I’ve gotten to create, my favorite to write was Ransolm Casterfo in BLOODLINE. He’s Leia’s political opposite—someone she wants to hate—but he’s a decent person, one who has valid points she can’t ignore. They struck sparks against each other, and he was intriguing in his own right, I hope. I’d love to write him again someday. Here’s hoping I get the chance!