The choice to be childfree in the US isn’t an easy one, particularly if you’re a woman. Expectations are set up for women from when we’re very young that include procreating and raising children. There seems to be this idea that one of our main roles as women is to prepare the next generation, and ideally, directly from our wombs. Women are supposed to be the nurturers, the care takers. And if life doesn’t take you down that path? You’re immediately suspect: Why don’t you want children? What’s wrong with you? Do you hate kids? How can you be that selfish?

These “suspect” women are the ones filmmaker Therese Shechter not only is interested in, but connects with on a personal level. The childfree documentarian decided to create a film that flies in the face of all the stigma and judgment surrounding women who make the choice to be childfree. My So-Called Selfish Life delves into the lives of childfree folks, while looking at the world around them, to figure out how they fit in, particularly with the current narrative of motherhood. We spoke with Shechter to learn more about why she decided to focus on this topic, and where the filming of the documentary has taken her.

GrokNation: Where did the idea for My So-Called Selfish Life come from?

Therese Shechter: I’ve always deep down known I didn’t want children, and it’s something I’ve been thinking about and talking to friends about privately for a long time. Over the past few years though, people have become far more public about choice to be childfree, that is, not wanting kids under any circumstances. They’ve also shared the truly awful things they’ve been accused of after telling people about this choice. That they’re selfish, immoral, greedy, unable to experience real love.

It got me wondering WHY there is so much judgment and stigma, why our society makes motherhood feel so inevitable and mandatory, who profits from it, and what we can do to shift that conversation. Even in 2017, women are still getting the message that motherhood is our most important –-and maybe only–- role in this world. And I think pushing back against that can resonate not only for the childfree, but also for people who wanted children and couldn’t have them, and mothers who’d like to be recognized for achievements in addition being a mother. 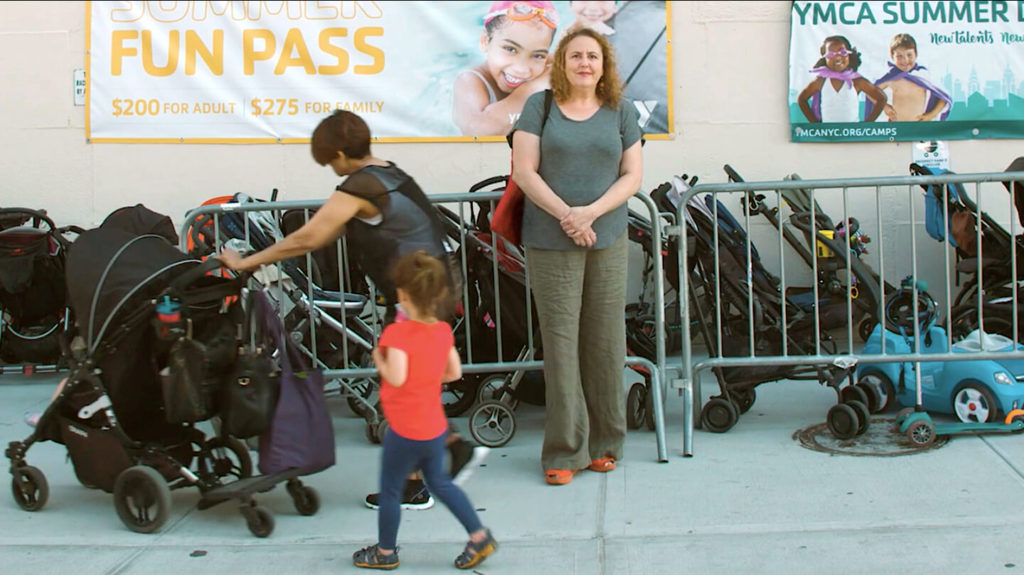 Filmmaker Therese Shechter amidst all the strollers

GN: It’s no secret that American culture has pushed the narrative of motherhood strongly. What do you think has helped push back against that as seen with a growing number of women choosing to be child-free?

TS: First of all, the internet, because you can find each other and see that you’re not crazy, alone, or ‘unnatural’ in what you want, that opting out of having kids is something you could consider. It can be incredibly lonely to be the only person in your community without kids. The internet helps you find your people. The first time I ever heard the term childfree was on Reddit, in fact.

The other biggie is contraception, of course. We’re only the second or third generation of women who can actually control whether we have kids or not (although just barely, given the current state of reproductive options in this country). Speaking historically, it’s likely there were women that didn’t want kids either, but without birth control, and agency over their lives, they had few options. We’ll never know how strong the deliberate desire was not to have kids, although we do know that the spinsters of the world, the nuns, the nannies, all created lives without kids in a socially sanctioned way.

GN: As part of the prep for the film, you put a survey out on social media, asking childfree folks some questions. What was the response like?

TS: When I started researching the film a year ago, I created a survey on the experience of being childfree and I assumed my friends and a handful of others might respond to. It was shared so widely and urgently, that after six days I had over 1900 responses. I thought to myself, huh, I think I might have a film here!

I’ve learned a great deal from the responses, especially the reasons people gave for not having kids–financial, medical, environmental, situational, and of course, because they just didn’t want them. I was also struck by how passionately people talked about the pushback they’ve gotten–and the wonderfully sassy ways they’ve dealt with it. It’s really helped us understand how to shape the film, and reinforced how much diversity there is in attitudes and experiences.

We’re at about 3786 survey submissions now, from 48 states (the Dakotas remain silent) and 53 countries. I will admit I haven’t been able to keep up with reading all the answers, but I’m really excited to be working on a qualitative analysis of all the data. It think it will be really fascinating when it’s done and I can share it.

GN: What are a few misconceptions that are out there about childfree folks that you hope to dispel? 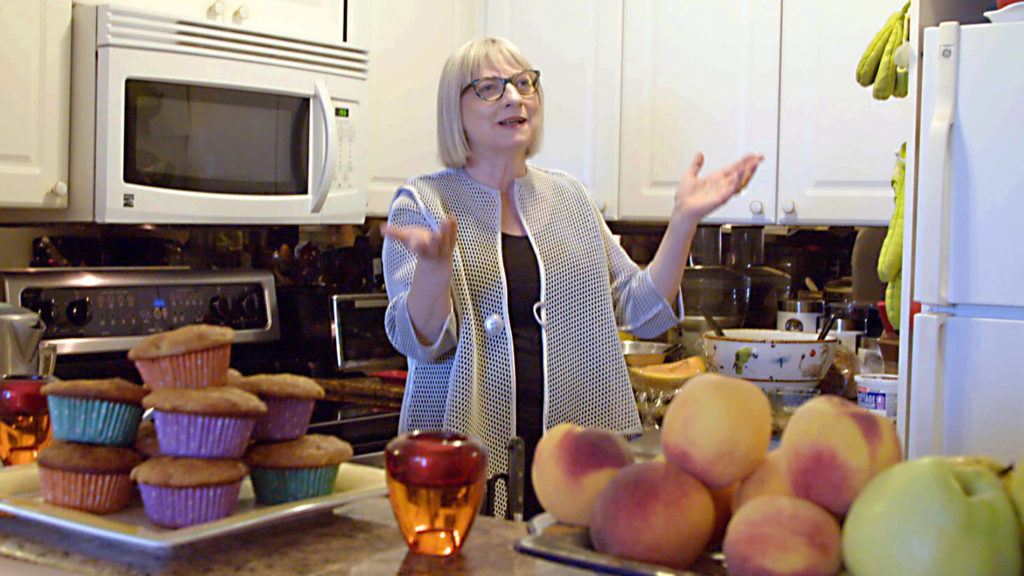 “What is selfish about a conscious, considered choice?” — Poet and memoirist Molly Peacock, in a scene from the film

TS: I feel like this is the question that launched a thousand online articles so I can Google that for you! Personally, as childfree lady, I’d like to state on the record that we’re not unnatural “UnWomen.” and there’s no secret cabal of feminists out to destroy motherhood and the family–at least they’re not inviting me to their meetings. And white, childfree people are not out to kill off the white race by not breeding with other white people (seriously, the White Supremacists love that one).

Also, people need to know that it’s not a homogeneous group. Some people have always known they didn’t want kids. Some weren’t sure and then life happened and it became clear that, for a variety of reasons, parenthood wouldn’t be in the picture. And others went through years of fertility treatments that ultimately didn’t work, and they made peace with that fact. All these people are in my film, by the way!

GN: You invite people to share their stories on your site, what has the response been like? Are women feeling more comfortable sharing their stories about being child-free or is there still stigma that exists that prevents many from speaking up?

TS: It depends who you speak to. In looking for subjects for the film, I can tell you that it was a lot less challenging to find white women willing to talk about this on camera than women of color. Off the record, on the other hand, I got an earful about the taboos in the black communities, the South and East Asian communities, in Latina communities. One Asian woman told me that her some married friends tell their families that they’re ‘trying’ and hope eventually people will think they just weren’t able to conceive. That long game lie seems preferable to coming out as not wanting kids at all. 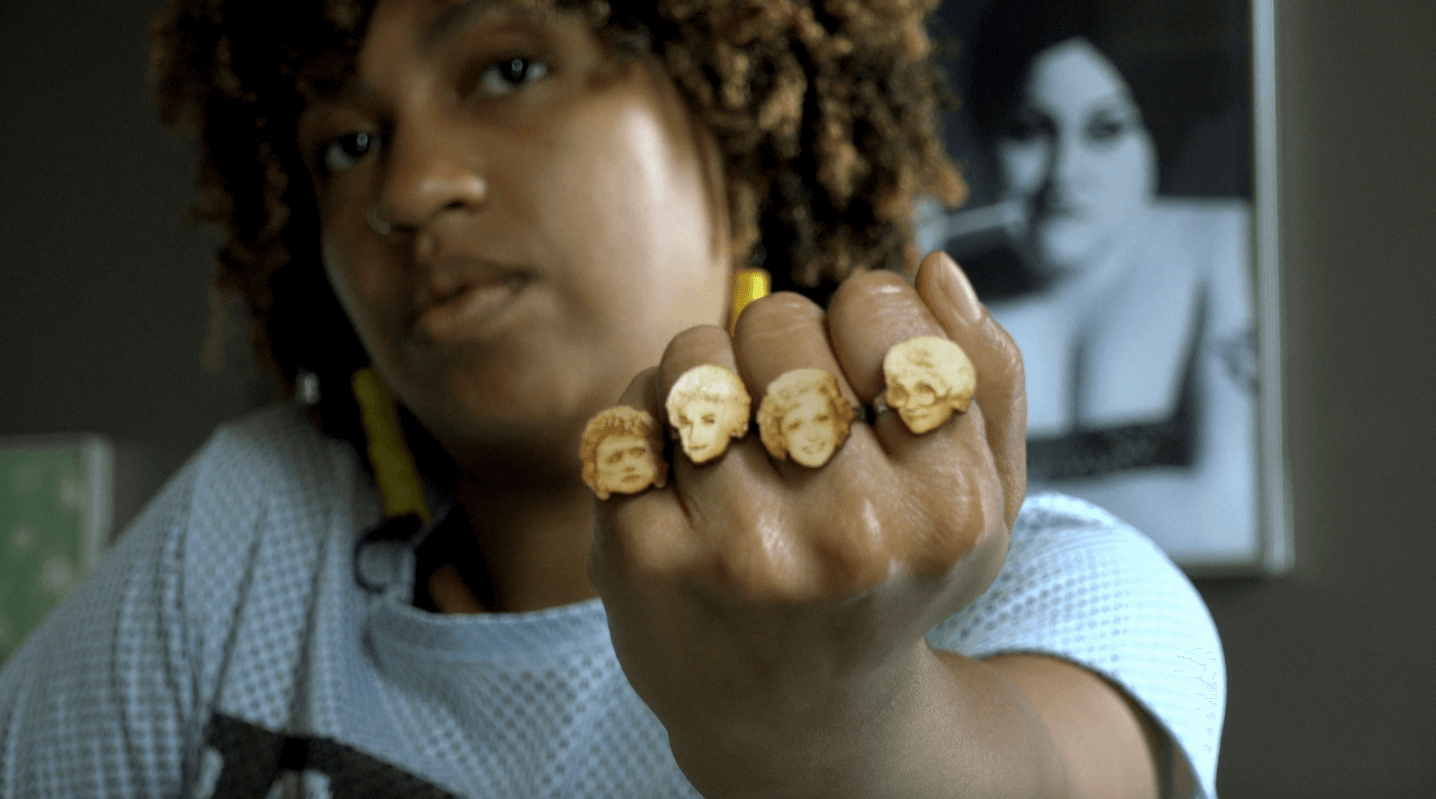 “The Golden Girls is about women and friendship and it’s not filtered through motherhood.” — multi-media artist Shanthony Exum, in a scene from the film

GN: What have been some of the surprising things you’ve uncovered while working on this documentary?

TS: Studying the history of motherhood, I was appalled at the things women were told about the need to become mothers, the right way to mother, the sacrifices that were expected of them, the deliberate way motherhood was intended to keep women out of public life. The image of women put on a pedestals, stuck up there without a ladder while being pelted with rotten fruit comes to mind.I guess I’m not surprised, but I’ve been reading a lot about ways in which the State has controlled who should have kids and who should not. I’m thinking about the coerced sterilization of women of color, of poor women, of women considered ‘sexually deviant.’ That’s a sad and rather recent history and I think it’s a crucial part of any conversation about the motherhood imperative.

And finally, I’m learning the ways that capitalism, nationalism, the fertility industrial complex, strict gender roles, anti-choice rhetoric all profit from a level of pronatalism so pervasive, we don’t even notice it.

GN: How revealing — if it all—  have you gotten about your own feelings on this topic in the film? Is working on the film impact the way you feel about being childfree?

TS: I use the questions I’m wrestling with in my own life, about my own place in the world, as a way of looking at larger issues in my films. I’m kind of your guide through rough territory, and I’m going to make it as thought-provoking and entertaining as possible for you. In the trailer for the in-the-works documentary, my mother recalls that when I was in high school I kind of blithely told her she shouldn’t expect any grandchildren from me, that it would be my sister’s job. And I have no regrets.

But in working on this film, I remembered that even though I didn’t want kids as a younger woman, I assumed I’d have to have them anyway, because that’s what adult women did. I had this feeling I had that I needed to get as much life in as possible before children arrived to devour all my dreams. I think that tug of war is something a lot of people experience and I’d like to talk about it.

Luckily, I dodged that bullet, mostly because I had few serious relationships until I met my husband in my 40s. Plus, I stopped caring about doing what I thought I was supposed to do.

GN: I love the title of the film and have to ask, do you think Angela Chase is married with kids, or living the childfree life?

TS: Ha! It’s hard to say where Angela Chase is now! Maybe she went to Oberlin, rebelled against her mother’s suburban life and all that it stood for, became an independent filmmaker and now lives in Berlin making documentaries about the surveillance state. Or maybe I’m confusing her with Laura Poitras. Anyway, full disclosure, the title is taken from the the childfree memoir Paradise Piece by Piece by Molly Peacock, who is in my film. Molly wrote the book in the 1990s, and she told me the show was very much in the zeitgeist.

All photos courtesy of My So-Called Selfish Life