What a night!!! The Nobel Prize plot is heating up, complete with a hilarious appearance that Sean Astin and Kal Penn’s characters made on Ellen, which was as funny and bizarre to watch for you as it was for us, I think.

Last night’s episode was very intense for me. Why? Anytime Sean Astin and Kal Penn come on our show, I am extremely excited. I tried so hard not to geek out when Sean was on the first time, me being a gigantic Lord Of The Rings fan and all. This time, however, I failed. I happened to be rewatching all of the LOTR movies the week he was here and I couldn’t help but mention it to him. Then I just couldn’t stop, and by the end, it was just me geeking out majorly. Thankfully, he’s so gracious—as is Kal—and I only felt slightly embarrassed!

Why else was it intense? Well, we had some real, huge hitters in the physics Nobel Prize world on our show! Frances Arnold, Kip Thorne, and George Smoot were all featured as guest stars, with Dr. Smoot even writing his own physics joke which he told in the final scene of the episode. It was so cool to see these hugely successful academics being “normal” people; I got to see them in their street clothes, in hair and makeup, and just hanging out and enjoying being on our set. Nobel Prize-winning physicists are just like us! 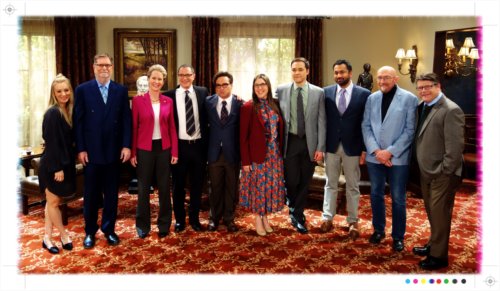 The cast with our special guests

Another reason this episode was intense was that the final scene has Amy blowing up and screaming a long speech. I was terrified I would not be able to remember it all. I practiced a lot in between scenes and I messed up on a few takes, but not too badly. That speech was hard to deliver as well, because even though I’m a “professional,” it can still be kind of embarrassing to have super emotional speeches of the comedic variety. Not only do you need to remember the lines and the placement of your body, but you have to do it while maintaining comedic anger, which is not as easy as I wish it was! I felt so sheepish having that kind of freak-out scene, especially because I was all alone. Amy doesn’t have anyone else freaking out with her or in opposition to her. Thus, the emotion is self-contained, and I have no external monitor for gauging if it’s “right”…it’s a speech I am kind of on my own with!

That being said, there was a subtle gesture I added to the speech where I smooth my hair down in anxious closure. Did you catch it? I think that was more a Mayim move than an Amy one, but I think it worked well for the scene.

It seems like Season 12 is taking this Nobel prize plot as far as it can go. Stay tuned to see what happens next week. Hint: I get reprimanded by an actress who just won an Oscar!

Read More From Mayim
Explore These Topics: Lord of the Rings Science Scientists The Big Bang Theory
More Like This: