The two authors of The Ambition Decisions were at a career crossroads when they began to wonder what had happened to the women they had gone to college with. Where had their smart, ambitious classmates ended up? Were they company CEOs, stay-at-home moms, doctors, lawyers or cupcake entrepreneurs? Hana, a writer as well as a Public Interest Technology Fellow at New America, a think tank, and Elizabeth, who has had a long career in print magazines, decided to track them down. The interviews  became a popular series in The Atlantic last year, and now this book. Pretty ambitious, if you ask us.

Grok Nation: What was your definition of “ambition” before you wrote the book, and what was it after? In other words, did you define “ambition” differently before embarking on this project, and how so?

Elizabeth Wallace & Hana Schank: Before we wrote this book, we both defined ambition more narrowly, as the desire and will to do things that matter, and to keep doing them. We also thought of ambition as something that was career-specific, more traditionally like … “Oh, that’s a powerful, ambitious woman who has risen to the top of her field.” As a result of our research, now we both see ambition as a trait that extends to how one approaches multiple facets of life: relationships, hobbies, parenting, fundraising for PTAs, activism, even fitness or planning awesome vacations or packing healthy school lunches.

Describe how your personal ambitions have evolved from college until now.

EW: My ambitions have been pretty consistent since college: Move to New York, make a life here, meet interesting friends and lovers, become an interesting person, work in magazines, publish a book. I’ve done a lot of that. What I’ve learned since college is that every year can bring new ambitions, and due to unexpected circumstances, new challenges and obstacles (like the magazine industry slowly evaporating, or my partner getting stage 3 breast cancer when we had a newborn and a 2-year-old). Part of realizing my ambition has been figuring out how to shift my approach to everything from career to marriage to parenting, quite regularly, to continue to actualize what I want. 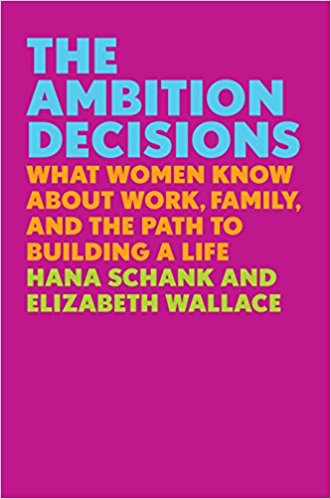 HS: Early on in my career I spent a lot of time trying to figure out how to be a writer while also having a day job I cared about. I flipped back and forth between focusing my ambition on building a technology career and building a writing career. By the time I added kids into the mix, I found it impossible to do all three things. For a long period of time I gave up writing, and also focused a lot more on having a career that would pay my bills and let me spend time with my kids, as opposed to something that would be deeply emotionally and intellectually satisfying. At the time I felt like I was a disappointment to my earlier ambitions, that I’d given up doing things that were socially or personally meaningful in order to just make it through the day. But now that my kids are older, I’ve found a way to bring writing back into my life, and have also shifted my day job to be something I feel passionately about. So my career ambition has come back strong––I just wish I hadn’t wasted so much time beating myself up over what I saw as a lack of ambition in my 30s.

How did your subjects react to the idea of being interviewed for this book? Did anyone refuse or need convincing?

EW & HS: Most of them were very enthusiastic, and very open. They wanted to reconnect with someone from their past, were open to connecting with us specifically, and wanted to hear what our other friends were up to since college. We write in the book about how these Skype calls became like group therapy to us and some of our subjects. One person we couldn’t find, one person would only answer email questions, and three people agreed to be interviewed but couldn’t ultimately find the time. Of course, as with any group of people, some were more open in their conversations than others. Some people only wanted to give us the basics, others were happy to share the innermost details of their lives.

How did your relationship with The Atlantic come about? How did the book deal happen?

EW & HS: Once we had done about 10 interviews, we knew we wanted to pursue this as a larger project. After about 30 interviews, we started using Hana’s user experience expertise to analyze and organize our interviews, and then draw some common themes. At that point we started to see different ways this could coalesce into an essay series. Hana had written for The Atlantic before, and we thought they could be a great fit for the content, so we approached them early on, along with a few other outlets. The Atlantic showed immediate interest, so, believe it or not, we put together a PowerPoint presentation (because yes, we are those people) to walk them through our findings and how we could see a series shaping up. They agreed to an essay series pretty much on the spot. After the essay series was published and went semi-viral (however that is defined), we were approached by a couple of literary agents. We spent a few more months meeting agents, and writing, and rewriting a book proposal. It took us a little while to figure out exactly how we wanted to use our findings for a book. We knew we didn’t want to just expand our Atlantic series––that we wanted the book to have new, useful information, and to help women who were struggling the way we’d struggled. And we knew that we wanted to go deep on some of our friends’ stories. Eventually we hit on the idea of using the stories to create a research-based guide for women. We knew that the information we’d learned from our research was too important not to put in the hands of other women. It was just a question of which pieces were most critical to share. Last June, we got a couple of bids, and here we are.

The subtitle is “what women know about work, family, and the path to building a life.” Can you summarize for our readers some of the wisdom imparted by your subjects?

EW & HS: The most powerful learning for us was one very simple message that spanned numerous areas of our lives and our friends’ lives: You have choices. We learned from our friends that ambition, life and career trajectories are not straight lines from college to job success, end of story, but rather, fluid, elastic narratives shaped around choices and circumstances that shift over years and decades. Our friends moved across the three paths that emerged among them—High Achiever, Opt Outer, and Flex Lifer—regularly in their lifetimes, some even over the few years that we interviewed them. We also learned that in our friends’ marriages and parenting setups, gender was, not shockingly, a big factor in who did what, especially when it came to emotional labor. But we also learned that those who wanted to shake that mix up could do so, with thoughtful and sometimes difficult but determined conversations. We also learned the truth that, happily for us, just because you haven’t realized all your dreams by age 40, doesn’t mean you still won’t.

Purchase The Ambition Decisions: What Women Know About Work, Family, and the Path to Building a Life  on Amazon.