Makeup has been an enduring reminder of what I don’t have and what I can’t achieve.

Fun fact: I was on the very first Proactiv Solutions infomercial in 1995. Yeah, I’m kind of a high school pizza face OG. The product samples didn’t work on me, so I couldn’t be used as a “before/after” testimonial. But they used me anyway: In a garden scene wearing an elegant maxi sundress on loan from wardrobe, sitting in a wrought iron garden chair among gorgeous white women who’ve never had a zit in their lives. They put so much makeup over my cystic acne that even in my awkwardness, I passed for a 20-something with good skin who spends her weekends talking about pimples in a tea garden with host Judith Light.

Being on a late night infomercial made me a minor star at my high school. I loved that people were in awe of my unpaid zit cream advertising work but was always embarrassed when they pointed out, “They put a lot of makeup on you.”

Clearly, I’m from a generation that predates Kylie Jenner’s lips and drag queen TV shows. I envy how easy it is now for young Asian women to instantly find other Asian women who can show them how to contour the Asian cheekbone. I envy the freedom in which young empowered women now wear makeup without ever having their feminism questioned.

My enthusiasm for applying makeup has instead been on par with a TSA pat down: I endure it but don’t enjoy it. When I see eyeshadow tutorials in magazines, I’m reminded I’m missing the double eyelid that white models have. The rare times in high school that I’d spot an Asian model whose makeup I could possibly mimic, she always had a stoic porcelain doll face that looked nothing like my tan, gawky, crooked teeth one.

As a teenager, I had an onerous ritual of dotting cover-up stick across my ever-exploding face. I tried desperately to learn makeup from friends and free makeovers at the MAC counter, but there was too much geometry involved in contouring. I still can’t remember the difference between primer and base.

In my 20s, I declared myself a proud feminist, but also fell into the trap that feminism had to look a certain way. That I had to reject mainstream beauty and the superficial people it would attract. That I’d be a bad feminist if I gave into the male gaze.

I gave up on trying to wear makeup right and instead, opted to wear it wrong. My performance art character “Fannie Wong Former Miss Chinatown 2nd Runner Up” crashed events like the Miss Chinatown pageant. She was an imposter beauty queen with makeup smeared across her face. She was loud, fast talking, and bawdy. I enjoyed the freedom of performing this character and brazenly getting femininity wrong. 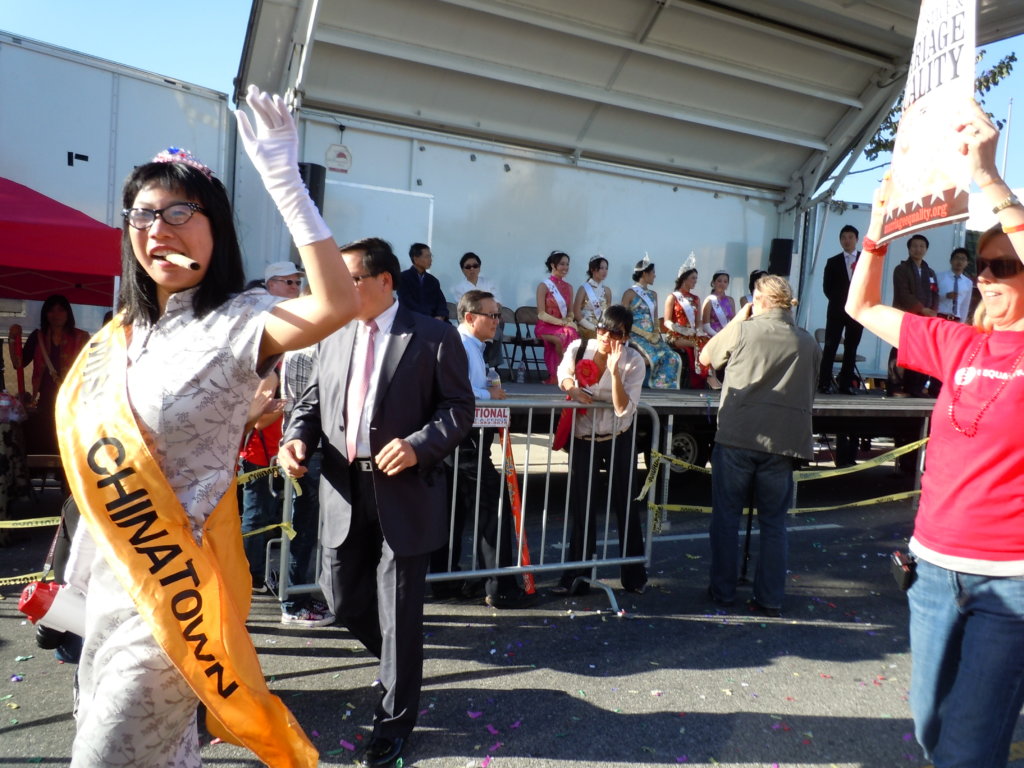 Still, I’d find myself occasionally suckered by makeup sales girls, buying armfuls of products that I secretly hoped would make me beautiful but would quickly forget how to use. I still have shoeboxes of spoiled once used highlighters, bronzers and contouring creams. They are totems of my failed relationship with beauty and the privilege that beauty seems to afford women luckier than me.

I got through the end of my 30s with eyelash extensions–literally having a “technician” individually glue synthetic lashes over my real ones. It was an expensive habit, but I could look at myself without cringing. After the Presidential election in 2016, I stopped using them because I was crying too much. Also, my eyelash technician said I had lost too many of my real lashes and needed to grow them out.

This past June at 4 a.m., I found myself lying in bed contemplating my 40 year old life. What does anything matter anymore? I’m 40 years old. I’ve learned to just be present with life and own my power. I don’t care anymore what people think of my face.

I start scrolling through Instagram (worst insomnia habit ever) and watch an Instagram model shill a subscription makeup box. I get excited that I’m at the age where I make enough money to try products without the guilt of wasting or caring if people tell me they can see it on my face. I get excited that out in the world is a sisterhood of equally clueless women who don’t know how to use these goodies but are subscribing and trying. But especially, I’m excited about the bargain of subscription boxes (remember: I’m Chinese American).

A few minutes later, I’ve subscribed to BoxyCharm, then, Ipsy. Did I just fall for a paid endorsement from an Instagram model?

It’s like Christmas morning when they arrive. I open these cute little self-care packages with glee. I finally stop caring if I’m a good or bad feminist. I try bright yellow eyeshadow for the first time, and I’m rocking it. It’s like I’ve discovered paint and the canvas that is my face and I don’t feel regret, I just feel like I’m finally amplifying the self-satisfaction inside me.

A couple weeks ago, I noticed that soon-to-be congresswoman and millennial superhero, Alexandria Ocasio-Cortez had tweeted about what lipstick she’d been wearing.

I have been getting many inquiries about my debate lip color in the last two days.

I had wondered months ago what shade that was but wasn’t sure if it would deride attention from her as a woman candidate to ask her about makeup or draw attention to her face. But she hasn’t given into this idea that as a woman politician, she has to pretend to not care about “girly things” like makeup.

I tweeted back at her: “ok, awesome, so I wasn’t the only one wondering. I worried it would be anti-feminist to ask. I AM SO GETTING THIS LIPSTICK.”

Ocasio-Cortez tweets back at me: “It is not anti-feminist to talk about ripped jeans and lipstick, because proud self-expression and acceptance is what it’s all about. Do you.”

She confirmed what’s taken me 40 years to figure out: Makeup or no makeup, what’s most feminist is to just self-express and DO YOU.