As long as I can remember, Passover seder celebrations in my family have been a big deal. Regardless of who hosted, many family members and friends would annually gather around the table, haggadahs in hand, readings, songs and blessings shared, ceremonial food enjoyed, and of course, a huge feast with all the trimmings. But then, this past summer, my Bubby — our great matriarch, and the last of my living grandparents — died, and Passover 2018 sort of fell off the radar.

We didn’t speak about who would host or where we’d gather to celebrate. I didn’t feel much like celebrating, to be honest. Who would make her perfectly tender brisket or sweetened carrot tzimmes? I wasn’t sure I could sit through a seder without her. So I started joking about “Passover in Paradise,” where we just fly off to someplace warm and “do Passover” on the beach somewhere. But my attempt at a little levity hit home for my family, and that’s how I ended up in Thailand with my husband, son, my parents, brother and his fiancée during Passover.

Thailand was the perfect place to ‘escape’ Passover. I didn’t see one box of matzah the entire time. The first night of Passover we were in the beach town of Krabi, and there was no seder to be found. No family gathered around a large table, glasses of wine, haggadahs, and plates of matzah between us. Instead, I half-heartedly picked at a delicious Pad Thai in a small restaurant off the beaten path while my husband was back in our hotel room with my son who was vomiting relentlessly, trying to shake off the heatstroke he had succumbed to earlier in the day.

I was trying to forget about Passover, the traditions, and the memories it brought with it — if only for a little bit, while I waded through the still sharp pain of losing my Bubby. And yet, it didn’t feel good. It didn’t feel right. I knew a seder in a strange land wasn’t going to solve anything, though.

The next day we flew to Chiang Mai, a landlocked city in the northern mountains of Thailand. We spent most of the first day in our hotel room, allowing my son to rest up some more. My parents had gone out to explore, and when they returned, it was with an invitation to attend a ceremony for young students at a nearby temple. Only my folks would go wandering about, befriend some Thai monks, and then be welcomed to witness a special religious ceremony.

So we went. And I had no idea how much I needed it. 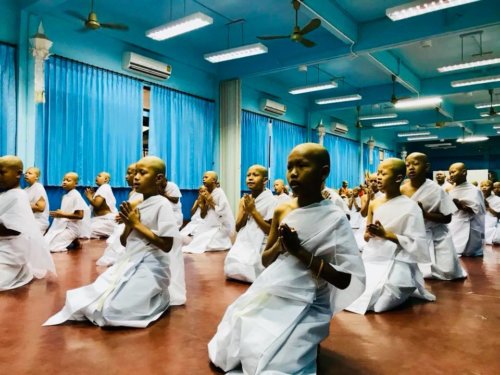 The Thai Buddhist monks brought us into a hall where almost 50 young boys, ranging in age from 10-13, sat in rows, their newly shaven heads gleaming under fluorescent lights. The boys were in their white robes — noting their student status. After this ceremony, and a few more to take place over the next couple of days, they would be given their orange robes, symbolizing their step up to novice monks.

A monk in orange began chanting, and the boys dutifully performed a call and response prayer that filled the room. A wave of peace and calm washed over me as they sang. I couldn’t understand their words, but their emotion and the meaning behind them was clear. And the tune was hauntingly familiar — it felt like I was back home during H 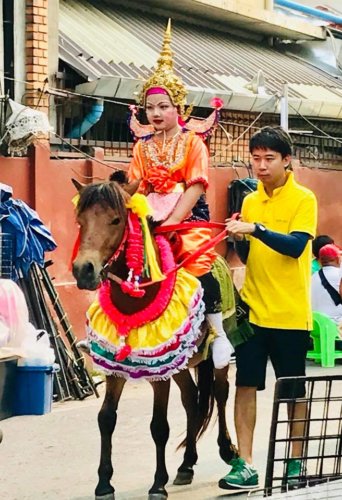 We were then invited to watch as some of the boys were transformed into the image of Prince Siddhartha before he became the Buddha. Intricate makeup and costumes were donned before the selected boys mounted horses and were marched through town. Parents, monks and local folks paved the way, and the communal celebration was palpable. A piece of my own soul — the one who was craving a religious connection — was soothed.

The beginning of our stay in Chiang Mai started to heal my spirit in ways I didn’t even know I needed. Our last full day of our stay, stitched it fully back up. I had done a lot of research before our trip, knowing that elephant tourism was a big deal in Thailand, and that it would be something my tween (an immense animal lover) would really enjoy. However, I wanted to make sure we visited with a company that was ethical in their treatment of these wondrous beasts — that didn’t shackle them or force them to give people rides. I finally found the Ethical Elephant Sanctuary, a small, Karen hill tribe family-run experience a couple hours outside of the city.

I wasn’t quite sure what to expect. My experience with elephants falls mostly in the “have seen them at the zoo a few times,” camp, and I had no idea what being *with* them would be like.

It was truly magical.

I’m not saying I found my patronus, necessarily, but spending a day with these beautiful creatures made me so appreciative — not only for these amazing animals, but for the people who give their time, money, and homes to ensure they have a safe, healthy place to just be. 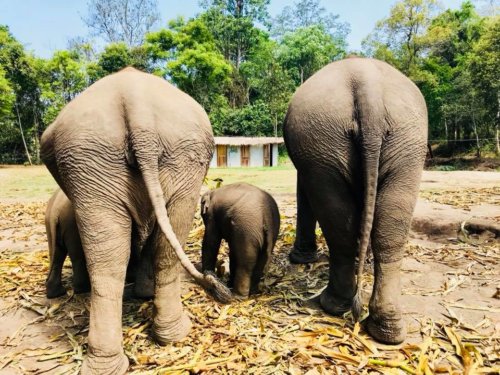 These elephants — two adults, two young adults, and two adorable babies — were allowed to just do their own thing, which mostly consisted of eating, eating, and more eating (each elephant plows through 500-600 pounds of food/day!). At one point, we took the elephants on a hike, which meant they led and we meandered with them, exploring the forest on their terms.

After a hearty lunch (for all of us), we went down to the “mud spa,” a big murky pit full of cool, thick mud. My heart burst watching my son slop mud all over one of the baby elephants. They had bonded throughout the day, and the connection was strengthened down in the mud bath. The elephant trusted my son, and in return, he trusted her. 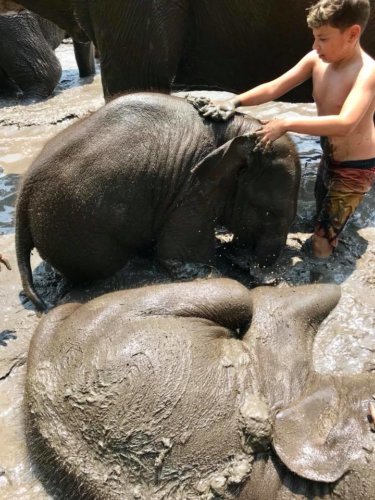 There was something deeply spiritual about sitting on slick, slippery rocks, watching my son and his new friends wade from the mud pit to the river to wash off. Here we were, steeped in nature, the only noise surrounding us coming from the birds rustling in the trees and the shouts of joy from children splashing around with elephants. In a land far from where I live, I found peace and a sense of home. I said my own internal prayer, thanking God and all that is holy for allowing me to experience this truly once-in-a-lifetime adventure.

I may have traded in my Bubby’s tzimmis for chicken curry over rice for one Passover, but the warm feeling of belonging and connection that bloomed in these hills helped ground me and prepare me for celebrating the holiday once again.