When Facebook gave me the opportunity to post my favorite reflections from 2016, I hit delete. 2016 is one year I would prefer not to revisit.

Like many women, I found myself triggered by the avalanche of misogyny coming from the Trump campaign. As Trump’s rhetoric began to escalate, I could feel my body telling me it was time for action. But before I could deal with the prospect of a Trump presidency, I realized I had to deal with my feelings from relationships in my life with men who exhibited Trump-like qualities. These men showed an inability to take responsibility for their own actions, demonstrated a “shallow” affect toward a situation when an emotional response is appropriate, lacked remorse or guilt for actions that insulted or degraded people, and displayed a general lack of empathy.

I spent the early part of 2016 untangling myself from a professional and personal relationship with a mindfulness therapist who scored a 30 on the Hare Psychopathy Checklist. (You can see the checklist at the linked website, but suffice it to say, it is not a good score.) In addition to these above traits, he exhibited a high level of irresponsibility and poor behavioral controls. This Bustle article “I was Dating a Sociopath” could have been written with him as a model, it describes his behavior so perfectly. (Not being a medical professional, I cannot officially diagnose him as a sociopath or psychopath, but the similarities I observed gave me food for thought.) While we never assumed a boyfriend/girlfriend dynamic, he proved to be a charming plus one whenever I needed an escort or an activity buddy. After he stopped pursuing women whose energy caused him to behave like a rabid squirrel in heat, we saw how our mutual interests could lead us to establishing a fruitful working relationship.

Initially, I attributed any conflict to the normal tensions involved in any working scenario involving friends. However, after a six-month period of apparent calm, he reconnected with a very controlling ex-girlfriend who discouraged any contact with me. Also, he resumed his aggressive dating pursuits of multiple women. Collaboration became impossible as he continued to miss appointments, and when he showed up, his mind was elsewhere. Furthermore, he cited inaccurate information from this ex-girlfriend to disparage our work together. In his mind, the collapse of our venture was solely my fault, a blame game I now see is standard operating procedure for a sociopath.

The energetic ties which initially connected us became frayed, like an electrical cord. I felt they would become explosive if they were not disconnected. But our possibilities for professional collaboration by combining my background in improvisational acting and religion writing with his training in mindfulness and cognitive therapy exercises remained potent for me. I found myself unable to disconnect completely.

The meditative practices that grounded me in the past failed to cleanse me of this negative energy; I was blocked, and couldn’t refocus to pursue healthier relationships. When a friend posted a Facebook message about about the concept of cord-cutting as a tool to help people to let go and move on, I was intrigued. Google yielded a Bridge Visualization exercise:

Visualize a walking bridge in your mind. Imagine yourself standing on the far end of this bridge. Now imagine the person you are wanting to cut cords with is standing on the opposite end of the bridge. When you feel ready to energetically connect with the other person begin walking slowly to the middle of the bridge. Allow the other person to walk toward you, meeting you half way. Once you are in eye contact with one another you may begin communicating with an inner dialog. Tell the person what your feelings are. This is not a time to be angry or be holding onto grudges – you are releasing the ties. Tell the person that you are sorry for all of the things you said or did that hurt him/her. Tell him/her that you are forgiving him/her for all the hurtful things that were said or done in your relationship. Say your good-byes, wishing each other well in your separateness. Turn around and walk off the bridge.

Initially, this simple exercise gave me a profound shift of awareness: I began to believe that I could truly let go of this toxic relationship. While I wanted to disconnect emotionally, it was logistically more difficult because we were involved an ongoing professional project. But I did what I could, cutting another small cord every time an email or other reminder came up regarding our work together, until I could cut all the cords and walk away for good.

Once the cords were cut, my anxiety and anger dissipated. Then I could examine these scenarios with greater clarity. I realized that, beneath his smiling, caring Dr. Jekyll-like veneer, he seemed to possess a Mr. Hyde core. As I experienced great instability being raised in a dysfunctional family, interacting with such types produces unhealthy reactions in me. My body begs me to flee from the negative Hyde energy but my mind misleads me into thinking that by focusing on the positive Jekyll side, I can make this situation work. This body-mind disconnect produces an undue anxiety that can make me feel like I’m crazy, and I react in ways where an apology becomes necessary. But the more I can connect my mind and body, the more effectively I can react to sociopathic behaviors in a calm and rational manner.

Now I have no desire to connect with him, and only feel the occasional annoyance when a reminder of our work together re-emerges. For example, after nine months without initiating any contact, last week he sent emails to three separate accounts requesting that “Ms. Garrison” send him a W-9 form. He demanded that I mail this to his new work address because he cannot receive emails from me.

If I had received this communication even a few months ago, the empath in me would want to achieve harmony. I would have suggested yet again that we meet to clear the air and achieve that elusive “closure.” But I know now that sociopaths cannot change, and that any further communication will not result in any positive interactions. So I simply shot him email replies to the addresses I had on file for him noting he can either use last year’s W-9 form or I can email him another form as I do for all other employers.

Sociopathic behavior can be so hard to pinpoint. Sometimes their actions seem to an outsider as normal, an honest human mistake.  However, these seemingly minor mishaps continue to add up like Chinese water torture until an overall pattern emerges that this is not how a normal person engages with others. Until you see the pattern, you simply cannot see the sociopath.

Also, I can now see I ignored signals that a key reason my contributions were not fully appreciated was because I am a woman. Since I sold my first article in 1995, I’ve lost track of the number of times I’ve been dismissed, gaslighted, and cyber-bullied largely on account of my gender. I developed a pretty thick skin and learned to soldier on and complete the writing tasks at hand, keeping my emotions bottled up. But no more. This election cycle told me it’s time to cut the cords and move on. I know this to be true in my mind and I feel it in my bones.

The challenge for me, as we move forward into a Trump presidency, is that our new president exhibits many of the same mannerisms found in an everyday sociopath. While I can cut the cords with individual men in my life, I can’t disconnect from the President and news about his actions. If anything, I need to remain informed so that I can continue to use my pen to speak out for those whom he targets.

Moving forward, I can stop trying to salvage situations that appear to be full of potential but end up Macbeth-style: full of sound and fury, and signifying nothing. I hope my techniques of identifying sociopathic behaviors and then letting go of negative influences will continue to guide me and others around me toward constructive engagement. Together we can connect with those people working at the grassroots level on positive transformational change. We can not just survive, but thrive. 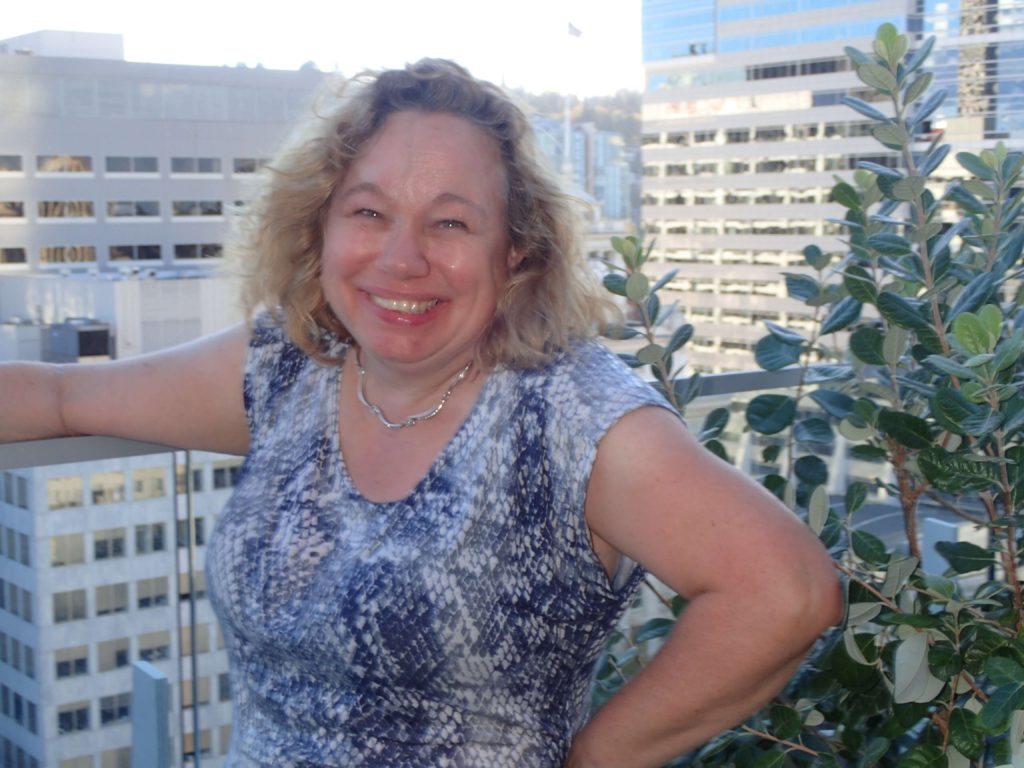 Becky Garrison is a freelance satirist/storyteller, currently based in Portland, OR. Currently, she is working on her eighth and ninth books. She has also contributed pieces to over a dozen books and numerous print and online outlets. She was a 2012 recipient of a Knight grant for Reporting on Religion & American Public Life. Follow her travels on Instagram and Twitter @Becky_Garrison