A six-year-old boy picks up a stick and points it at another child. “BANG, BANG, BANG! YOU’RE DEAD! I KILLED YOU!”

I see this all the time in my work. As a mentor of children, I teach Stone Age skills and nature connection as doorways for children to understand who they are, and I also provide tools and perspectives to help them consciously navigate the modern world. A big part of what I do is observing what comes naturally to children and supporting them to express these instincts in healthy ways. So, I watch when a child finds a stick and pretends that it’s a gun… or a sword… or a spear… or a bow. Another child grabs a stick and yells, “NO! YOU MISSED ME! BANG! BANG!” Some parents look away and try to ignore it. Some dismiss it as “boys will be boys.” And some parents even try to convince these bloodthirsty kids that they’re holding “love guns” or something… well, you know… not so violent.

But picking up a stick and pretending it’s a weapon is an instinct, and such a powerful one among children (especially boys) that almost everyone – kids of hippies and yuppies alike – does it, regardless of the environment the child was raised in. It’s something that we’ve had within us for a long time… since before we were modern humans (Homo sapiens), actually. We’ve been Homo sapiens for only the last 200,000 years, and the first stone tools were made 3.3 million years ago. So, our relationship with sticks runs very deep.

Every child and most adults will instinctively pick up a stick that appears interesting. We find a straight one and use it as a walking stick even if we don’t really need it. A bent stick becomes a bow. A short stick may be a knife. And, of course, to the horror of every peace-loving parent, there’s the ever-present gun.

But the real issue isn’t the tool; it’s using that tool to “pretend kill” another person. To understand why this happens with kids today, consider that for 99.999% of the time that we’ve been on two legs, we’ve been on the menu of large predators. Saber-toothed cats, cave hyenas, dire wolves, lions, tigers and bears, oh my! Every prehistoric child grew up knowing that at some point in his life, he’d be called upon to stand bravely to protect his village by facing down a hungry predator. Perhaps this is where the deep desire of every boy to become a “hero,” one who stands strong and unyielding and protective, comes from…

Consequently, we have this deep instinct… a “life or death” instinct… to look for the predators and kill them or chase them away. Children instinctively practice fighting with sticks because somewhere deeply hidden in our collective unconscious is the knowledge that facing down an animal that is bigger and stronger than you is terrifying, and only through practice can you attain the physiological competency to act bravely rather than freeze with fear.

During this same long pre-history of humanity, humans seem to have gotten along rather well with each other. There’s almost no evidence of warfare before agriculture gave us a sedentary lifestyle, stockpiling of resources, competition and the concept of ownership. Before then, we lived semi-nomadically as gatherer-hunters with almost no possessions, and we shared everything. And, like our closest relatives, the bonobos (pygmy chimps) and chimpanzees, we probably resolved most conflict through grooming each other, cuddling and sex. Even “strangers” were welcomed to share their stories, information about the locations of animals and resources, and the opportunity for a roll in the meadow with a new partner. Every meal was sort of a community “potluck” affair, and just like our potlucks today, we tended to get along with rather than kill new members to the community.

So, if the truth about humanity is that we were almost always “friendly,” then kids today who pick up a stick and turn it into a weapon are following a PROTECTION instinct. But because humans (and changing environmental conditions during the late Pleistocene) have sent almost all of the big predators down the road to extinction, children are confused when seeking an outlet for this very powerful instinct. You can hear them seeking to understand the threats to their community in the vague terms “bad guys” and “good guys,” but young children really don’t know who the “dangerous others” are. Only as society teaches children to label certain kinds of others, the terms become “cops” and “robbers,” or, in my day, “cowboys” and “Indians,” or “Americans” and “the Germans.” Whoever the “bad guy” was didn’t really matter because that person would likely play the “good guy” during the next game. The important thing was simply to play at being courageous against whatever the threat was imagined to be.

But here’s the problem. With the big predators gone, the only animals really capable of hurting us is us. With this transference of focus from four-legged foes to two-legged ones, we created a belief that people who act or believe in ways that frighten or confuse us are dangerous, and dangerous others must be “killed or chased away” or at least subdued and disdained. Humanity will never achieve peace or Oneness as long as we continue to teach our children this.

So what do you do when your kid is sizing up his next potential gun? I suggest that you guide his imagination to support him to become a protector and provider. You can get behind your child as he protects you from lions or dire wolves. When he’s defeated the predators, send him in search of food to feed his tribe. Make him a hero.

Of course, there are thousands of video games and movies and newscasts and politicians who are trying to tell your child that the two-legged enemy is real. That there are “bad guys” that fit neatly into that black box of “dangerous other,” so you can ignore that they have families and go to potlucks and sometimes fall in love or have their hearts break, just like us.

I like to think of a child’s relationship to these concepts like any good relationship: provide a positive message 5-6 times more often than a negative one. Research modern animal predators like polar bears, tigers and sharks with honest admiration for their hunting prowess while learning about the important role they fill in their environments. Find examples of people who were both “bad” and “good” and try to understand their experiences, influences, and how their beliefs and behaviors changed. Learn about different cultures and their views. Identify all of the ways in which you make people “others” and heal your judgment.

Together, we can find our way back to the Village. In this place, there are no others. Please bring your stick and beware of sabre-tooth cats, but be sure to put your stick in a corner when it’s time for the potluck. 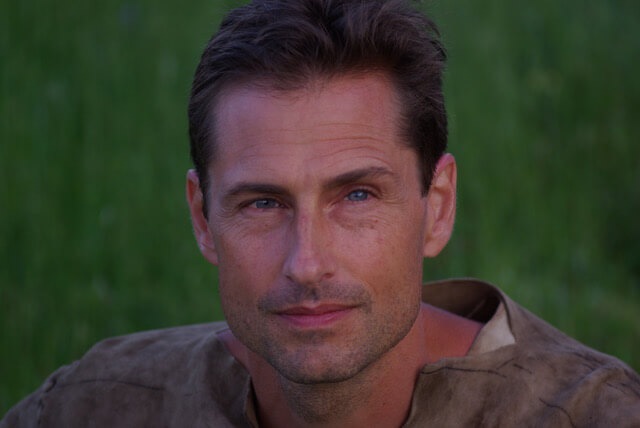 Chris Morasky is a wildlife biologist with over 30 years experience teaching Stone Age skills and nature connection and is considered one of the top Stone Age skills experts in North America.  Chris has lived most of the past 20+ years in the wilderness and small communities of British Columbia, Idaho and Utah.  He lived in a tipi for 6 years, homesteaded along the most remote mail route in the lower 48 states and led totally Stone Age expeditions into the wilderness of Idaho and Oregon.  His teachers include Lakota, Shoshone, Arapaho, Crow, Blackfeet and Serri tribesmen, many wilderness skills experts and life itself.  Chris’ workshops focus on awakening instincts, ancient skills and deep nature connection as doorways to understand more fully who we are and why we’re here. For more information, click here.