The tornado warning came over my phone on an unseasonably warm Saturday in February. My husband was unconcerned when I reported it to him, and it slipped my mind as we tried to cram a morning’s worth of “did I tell you…?” and “please don’t forget to…, ” into the thirty seconds we had to hand off the kids between our various appointments.

Once in the driver’s seat, I checked the rearview. My kids’ faces were painted with panic.

“Mommy, is there going to be a tornado!?”

I say these words in a cheerful tone often. It’s my way of being reassuring about things over which I have no actual control.

“Mom, are robbers going to break into our house?” I hope not!

That morning I drove the car into darkening skies. A few clouds dipped down in what could be described as a conical shape. I felt the wind push us off our path, and I worked to steer us straight. I reminded myself that tornadoes are uncommon in our part of South Central Pennsylvania, as if a reliance on statistics could keep us safe.

At home we stood in the front hallway watching the weather. Rain moved diagonally at first and then parallel to the street, like the trash that blew across the neighborhood. I used my upbeat tone when I said, “Let’s go to the basement!”

Downstairs my kids occupied themselves with toys they hadn’t seen in months while I tracked the storm on my phone.

“I forgot about this!” my son, four, shouted as he held up a plastic dinosaur.

When the low roar of the wind became audible despite the lack of windows in the basement, my kids put down their toys and looked to me for answers.

“What if we blow away?” my son asked.

“We’re in the basement.” A cheerful tone, a non-answer.

“What if upstairs blows away?”

“I don’t think that will happen.”

In my head I went back to statistics: It’s unlikely to happen, would have been a more truthful answer.

In the basement I tried not to show my fear because that would scare them, but I was definitely afraid. I imagined myself being interviewed on local news surrounded by debris and proclaiming “All that matters is that we’re safe, now that we’ve lost everything.”

Honesty is important to me, but it’s become more complicated since I’ve had kids. I used to feel things fully and express those feelings with abandon. Now, there’s a complicated calculus involved with how much I can show my own emotions before they damage someone else. I’m a constant tornado warning who might just turn out to be the real thing.

That day, the tornado touched down a county over. No one was hurt, but I was rattled. Rattled by a tornado in Pennsylvania in February, but also by the responsibility of raising two kids when I felt so unmoored myself. I hadn’t been the same since the election, and hiding my fear of Mother Nature reminded me of what happened with my daughter on November 9th.

That morning, after too little sleep, I had awakened still devastated by the results of the night before. There was no time or space for tears, because I had to wake the kids and get them ready for school. In the still-quiet house, I rehearsed what I would say.

“Hillary did not win. She will not be the next president. There will be some people at school who are happy and some who are sad or mad. I expect you to be kind. I don’t want to hear that there were arguments about who should have won or why she lost…”

Surprising myself, I delivered my speech without a tear, but then my daughter, age seven, said, “What about us, mom? We’re Jews. And Donald Trump doesn’t like Jews.”

The kids at school had been talking about the election for months. Some children of color feared they would be deported if Trump won. Others were still clinging to their parents’ allegiances to Bernie. Still others felt Trump and his wall would make America Great Again. The second graders got their information from a variety of sources, and it was hard to keep up with them, but based on what I had seen of the campaign, I couldn’t argue with her.

In a feeble attempt to shield them from their changed world and their mother’s emotions, I left the room to cry.

Immediately after the election my husband and I started organizing. The day of the February tornado, I was coming from a planning meeting for the Left/Right Café, a community initiative at which people with opposing views sit and have dinner together one-on-one. My husband was on his way to interview a local college chaplain for his podcast on people who are responding locally to national and international issues. We regularly attend protests, vigils and meetings for a variety of causes that are important to us and our community. My fake upbeat tone wasn’t solving anything, so whenever it’s appropriate, we include our kids in these activities – exposing them to ways in which people are trying to make the world better.

Lancaster, PA, the city we live outside of, has recently been called “America’s refugee capital” by the BBC and others. At a recent event where refugees and immigrants spoke passionately about their journey to our city, some through tears and some through anger, my daughter and I sat together in the front row. When the organizers asked us to write notes to our congressperson, my daughter wrote this: 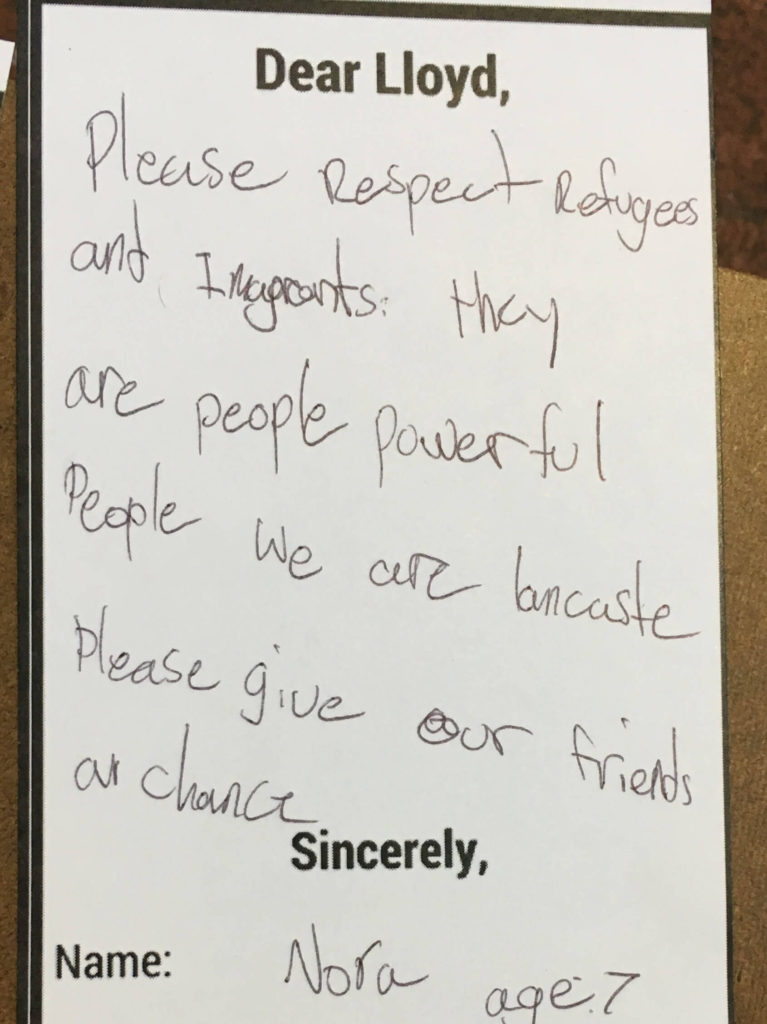 I read it through tears I did not shield her from.

In November, I was too overwhelmed with my own grief to involve my children in my response.  By February, I was too focused on protecting them from a brutal world in which our existence seemed tenuous. It wasn’t until this summer that I understood our way forward. I can’t change the outcome of the election, and I can’t conquer Mother Nature, but I can join forces with my children, show them my passion, and give them the information and the tools they need to be part of the solution. 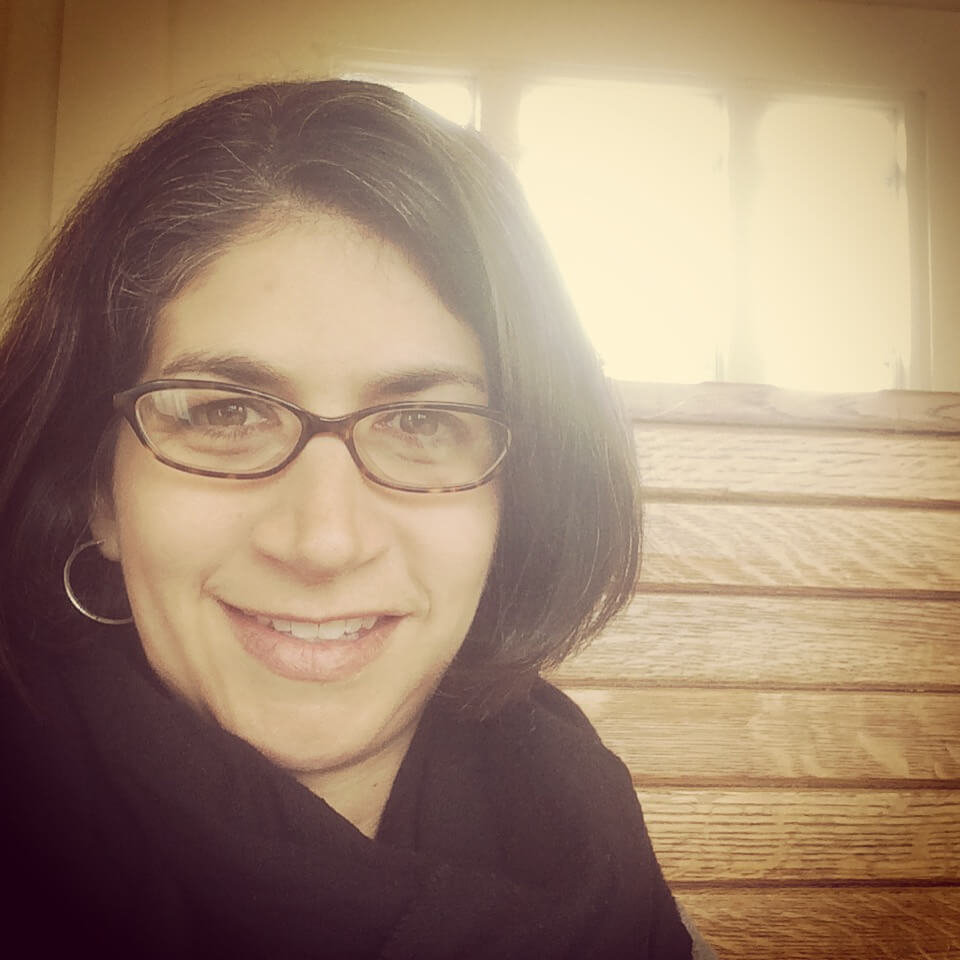 Jamie Beth Cohen is a writer, storyteller and community organizer who has a full-time job in higher education and a family she loves very much. Sleep is elusive. She tells stories at Lancaster Story Slam and co-founded Write Now Lancaster & Lancaster Action Now Coalition. Her work has appeared in The Washington Post/On Parenting, The Baltimore Sun and TeenVogue.com. Find her tweeting about her (in progress) YA novel @Jamie_Beth_S.