In reflecting on the best thing that happened to me last year, I’d be hard-pressed to put anything above the installation of my new, solid-oak bedroom door. That may not sound like a big deal, but my elderly mother, who lives with us—in the room right across the hall from mine, no less—snores, and let’s just say the old door wasn’t cutting it. Worse yet, I went without any door for a while after my overzealous 16-year-old accidentally yanked the previous lighter-weight model off of its hinges when bursting into my room, doubtless to bring me up to speed on the latest revelatory video he’d come across on YouTube. Sans door, sleeping had become a challenge, given the sounds of what seems to be a nightly Harley-Davidson rally emanating from my mother’s room.

Strong doors, ones that provide privacy from noisier-than-imagined mothers as well as boisterous kids, are just one of my secrets to coping as a member of the “Sandwich Generation.” If you’re not familiar with the term, it’s the name given to those of us simultaneously caring for our children and older relatives, usually our parents. A study from the Pew Research Center showed that nearly half of all Americans in their 40s and 50s have a parent 65 or older and are also raising a young child, or helping to financially support a child 18 or older.

While I became a card-carrying member of this contingent many years back, I took up residence on the front lines in 2016 when my mother moved in with my sons and me full-time after a stroke led her doctors to determine she could no longer live alone. There had never been any question in my mind that Mom would ultimately come and live with me whenever she needed to, and the fact that she’d cared tirelessly for my father, who’d been a paraplegic for nine years before he died, only strengthened my resolve to provide as happy a home for her as possible whenever the time came.

But of course, this has been an adjustment—for both of us.

Many days, I suddenly find myself feeling like I’m in high school again. My mother has not only been my mother all my life, but she is also a retired schoolteacher. Thus, she is extremely accustomed to being in charge, both personally and professionally, and it has been difficult for her to calm her natural tendency to run the household despite the fact that I’m a full-grown adult. She will reflexively say something along the lines of, “I think it’s time for the dog to go out,” — this, of course, being my dog — or, if she catches herself, “Don’t you think it’s about time for the dog to go out?”

Other stressors occur when I am out running errands and she believes I have been gone for too long—troublesome because, as a single mom, when my children are at school, I am unused to having to be accountable to anyone else for my time in this manner. I received a text once from Mom that simply contained my home address. When I called to ask what this mysterious communication was supposed to mean, she said, “I thought maybe you’d forgotten where you live, you’ve been gone so long.”

For me, the best way to combat these irritations is to take them with a grain of salt. Mom absolutely means well, and at the end of the day, it really is up to me when I walk the dog; I don’t need to make a big deal about it every time. I blow off our little skirmishes when possible, and when it’s not, I take a deep breath, count to 10, and try to be direct but not angry about what bothers me, and ask her to do the same. I don’t take it personally, recognizing that there are certainly things that I do that are “pet peeves” of hers as well. 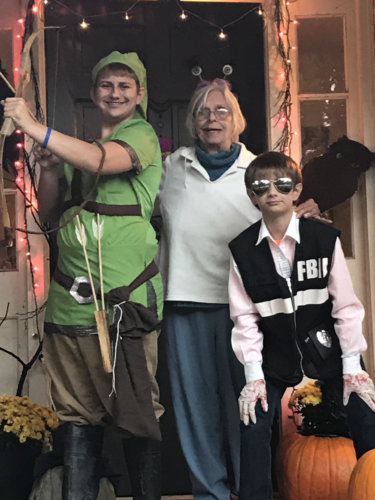 Julie’s mom and children on Halloween a few years back

The one place this is non-negotiable, however, is with my kids. I am their mother, and as such, I am responsible for them. That means policies in the house are to be set by me and rules are to be made and enforced by me. Mom may not like the way some things go in our house, and we’ve definitely made some adjustments to make her feel at home — this has been a process for my sons, too — but Mom became a member of our household, and not the other way around.

Conversely, just because I am helping care for my mom, I have to be very careful not to treat her as if she’s one of my kids. Once, when we were eating out, Mom said, “Could you pass me the pepper?” I automatically corrected her, “Could you pass me the pepper please,” just as I would have my children, and died laughing when I caught myself a minute later. Especially since I have a relationship with her that makes her at times extremely vulnerable to me — my goodness, I help her in the shower, after all — I try to find opportunities for her to exhibit the expertise in any given situation, especially with my boys. Recently she spoke about growing up in a community of Swedish-American immigrants as a little girl in the suburbs of Chicago while my high schooler was writing an essay on cultural assimilation. That’s insight that no one else could provide him with other than his grandmother.

If you’re already a member of the Sandwich Generation or just joining the club, here are a few more of my tried-and-true tips for survival:

At the end of the day, I love that the boys are getting this time to spend with their grandmother. She lived six hours away for most of their lives, and they definitely know her way better now, and she them, than they would have had they had not had this opportunity. As for me, it’s my honor and privilege to share my home with her, and to offer her whatever care she needs and all the love I have.

Now if you’ll excuse me, I’m being told I need to take the dog out.