It’s that time of year again when we find ourselves in the homestretch of another school year. Summer vacation just a breath (or six weeks) away and we can almost see the old notebooks and folders in the recycling bin. It’s been a good year but now it’s time for final report cards and a slow-motion montage of kids and parents high-fiving and crowd surfing as Alice Cooper screams the lyrics “School’s Out for Summer.” We are so close, but not quite there yet. First we need to wrap up a few school projects that all got assigned in what should be these final halcyon weeks of the school year!

School projects. I admit I have a definite love/hate relationship with them. So far, as the father of three, I have had the privilege of engaging in every project imaginable from nursery school through seventh grade. I know they are assigned to the kids. I know that. Yet, each time that assignment sheet makes its way home something comes over me. I understand that the kids need to do these projects on their own. I really do. Doing so teaches independence, how to follow directions and learning how to see a task through from start to finish. Never mind that the subject of the project itself also seeks to impart wisdom on their young, sponge-like minds. All signs point toward my handing them the assignment sheet, helping them buy supplies and for the most part butting out. However, that’s never the way these things go down. 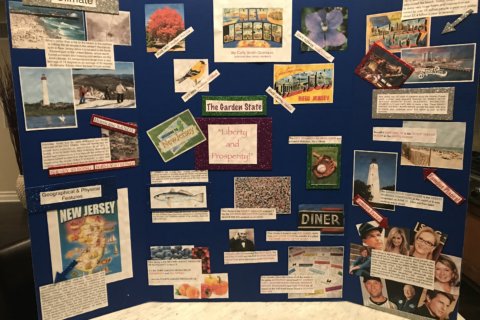 For me it started when my now 12-year-old daughter was in pre-school and was assigned to make a construction paper turkey that represented our family. By the time I was done with that turkey it had glittery jewel-tone feathers, a shiny top hat the likes of which Marlene Dietrich would have worn and, I kid you not, a small sequined purse dangling from its wing. My husband looked at it and said, “That’s less a school project and more a cry for help.” I didn’t disagree but my project meddling didn’t end there—and I know I’m not alone.

I see you all in the craft stores while the kids are in school. There we are telling ourselves it’s just easier to shop without the kids. Maybe even bumping into other parents working on similar projects and laughing about how silly it is before we start comparing ideas and excitedly explaining ‘our’ individual projects. It’s right there in that moment that we stop referring to the project as the child’s and take blatant ownership of it. “Isn’t this shamrock masking tape great for MY leprechaun trap? I have a whole system of levers and pulleys worked out so when a leprechaun steps into it, the trap door springs into action and skittles shoot out the top like an edible rainbow!” That was for a kindergarten project. To be honest, my leprechaun trap did not erupt in a rainbow of fruit flavored candies but only because I’m not technologically advanced enough to have pulled that off. If I could have, I would have.

There’s something about the combination of a hot glue gun warming on the counter alongside a pristine, blank trifold poster board, an assortment of glittery adhesive letters and pics printed out from the Internet that just makes me feel like the world is my oyster! Laying it out, dressing up the required material to make it ‘pop’ and having it correspond to the obligatory 4 minute speech that will accompany it becomes kind of magical in the moment. Okay, maybe not magical, but the job needs to get done and so long as I’m taking control of it shouldn’t I enjoy myself? And again, I know I’m not alone.

I’m not alone on those text threads sharing pics of MY project in its different stages of completion. Giddily this gay, stay at home dad both sends and receives these kinds of pics with countless moms who also have co-opted their kids’ projects. We laugh and marvel at each other’s creativity and ingenuity. We go to open house at the end of the school year where said projects are on display and we can be heard saying to other parents, “Ooooh, I love your landmark project! Come see my state project. I did New Jersey!” Nary a mention of the actual kids. I know it’s wrong but I take solace in the fact that I never do my kids’ homework for them. I mean, what’s fun about homework? That, they can have.