Mingling with other parents at the playground after the daily school pick-up, a fellow kindergarten mom begins to make small talk as our kids climb all over the monkey bars. We talk about how our kids are enjoying school, where in the city we live, and because this is Toronto, our careers. As it always does, I knew what the natural progression of the conversation would be and what would come next:

“What does your husband do?” she asks innocently.

“Actually, I’m a single mom by choice,” I say, a little awkwardly, and because I want to be true to myself, “and I’m a lesbian.” My cheeks flush right along with hers. I didn’t intend to embarrass her, though I have.

As a lesbian, I understand that coming out is a lifelong process; I encounter some version of this conversation on a regular basis, whether with coworkers, fellow parents or hairstylists. Pre-motherhood, I was visibly gay. My short hair coupled with my masculine-of-center style of dress and (sometimes) another woman holding my hand made me easy to read as queer.

On a sleepless night in recent history, I was mindlessly scrolling through Facebook when I saw mention of Hannah Hart, a lesbian YouTube vlogger/celebrity. She’s really cute in that “lesbian next door” kind of way, if not a bit gregarious. I watched a few of her videos and as I studied her mannerisms and looked at her style of dress, I just felt so… wistful. I used to look cute. I used to dress like a hip(ish) lesbian. I used to get asked out by women.

Now I look exhausted, wrinkled. I dress like a frumpy mom more often than not, and when I buy clothes, they’re usually for my daughter. I get mistaken for a heterosexual woman on the playground. I certainly do not get asked out by women. 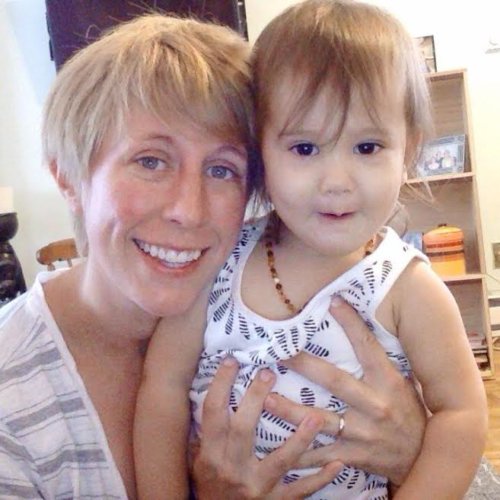 The writer and her daughter

Coming out in my pre-motherhood life was easy to a degree. It feels more complicated now that I have a child, and I haven’t figured out a foolproof way of approaching my sexuality when it comes up. Before I out myself to other parents, I have to consider my daughter–her relationships with her peers and how she’ll be treated as a result of having a single, lesbian mom. I have to decide whether to out myself every time the subject is broached, potentially opening the door to awkward subject-changing, homophobic vitriol, or the silent treatment in future encounters.

Although I don’t necessarily mind people not knowing I’m a lesbian, I don’t particularly like being thought of as straight. Having officially “come out” as a teenager, so much of my identity for so long has been tied to being a queer person. Being openly queer in the world touches nearly every part of my life in big and small ways. But right now I feel so invisible as a queer person. This relatively newfound invisibility hurts and is hard to admit to myself. To look at me is to look at a slightly overweight mother of a small child who needs so much of me–my time, my attention, my resources. That’s it, that’s all. I don’t have the time or energy for much else.

The cultural presumption of straightness is deeply ingrained, and because I don’t have a partner to navigate the world with, it is clear that people read me as a middle-aged straight woman more than they don’t. Something about having the title of “mom” brings with it presumed heterosexuality, even in an urban & diverse city like Toronto.

I don’t spend any time being out in the “queer world” in the ways I used to. My saving grace is that 90% of my friends–the village helping me raise my daughter–are queer-identified. Even still, some of my friendships have suffered because a large number of my queer-identified friends have chosen a child-free life, and no longer invite me to their late-night outings. At this stage in my life, when I am more likely to spend my evenings at home on the couch in my sweats than at a queer film festival, my identity as a mom is the one that takes front and center more often than not.