I grew up with a feisty terrier named Casey who lived to be 16 years old. She came into my life when I was 11, and just barely tolerated me. She adored my parents and followed them everywhere. Her love for them was pure. I knew that in Casey’s heart I could never come in more than third place, and that was fine. To be fair, I teased her mercilessly by stealing her toys and blowing on her face every chance I got. She was more sibling than pet to this only child.

When we were in our 20s, my husband and I rescued a beautiful border collie named Rex. He grew to epic, Clifford the Dog-like proportions and was almost as big as our 500-square-foot NYC apartment. He was our baby almost a decade before the first of our three children arrived. Rex was not without his issues though. Territorial, filled with anxiety and, sadly, could not be trusted around strangers, despite his loyalty to us. He was a much more complicated pet than we really bargained for. Still, we loved him immensely.

When Rex passed, I believe there was a cushioning of the blow because we had young children. Their presence gave us something to be distracted by and helped us to remember all the good years with him. From there, we were too busy with babies to even think about getting another dog. My girls would ask when we could get a puppy, and my answer was always, “Not right now.” At one point after my youngest daughter, Tatum, was born I haphazardly agreed that a puppy could join our family when she turned 5. It seemed like a safe distance away until suddenly, Tatum was 6. My words had come back to haunt me. The jig was up and it was time for a new addition to our party of five. 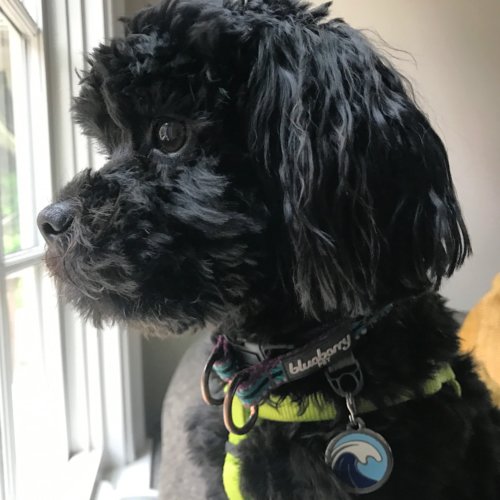 Enter a tiny, 4-month-old, black shitzu-poodle we saw at a pet store. I know, I know, adopt don’t shop! We had previously only rescued our pets, but this time around one of my girls had a severe fear of dogs that she was desperate to overcome. We frequently stopped by the pet store in our mall to take a pup from a crate so she could attempt to hold and get comfortable with it. So far it had not worked, and instead she felt defeated and her sisters were growing angry with her for not getting over her fear. Then, finally, she made a connection with this (perfect) puppy and it seemed like a sign that we’d found our pooch. The girls and my husband were all in on him and named him Teddy before we could even exit the store.

Yet, happy as I was to see my daughter overcoming her fears, I still wasn’t sold on adding another life form to our brood. I was the lone holdout, the voice of reason, the wet blanket. I knew that the care and maintenance of this guy would fall to me while my husband was at work and the kids were at school/dance/playdates/etc. Did I need to arrange my days around training this adorable pup or making sure he got his daily walks in? Was I looking forward to adding vet appointments to my already congested schedule of pediatricians, dentists, orthodontists and tutors? No, I was not.

Never in my entire life has my gut feeling on any topic been more wrong. Teddy, or Ted as I have come to call him with great affection, has today been a member of our pack for almost two years, and I cannot imagine our life without him. The irony of this situation is that everyone in my family except me desperately wanted him, and it turns out I needed him more than anyone. Ted is everyone’s baby and he holds a special place in each of our hearts, but he has become a constant companion of mine. We hike, we take long walks on the beach as often as we can and socialize with other dogs and their owners in our neighborhood. More often than not, we just run errands with him as my copilot as we dart from stop to stop in our suburban habitrail.

Ted arrived just as my youngest daughter was leaving her half-day of kindergarten to embark on a full day of first grade. My own personal time was about to get a little more plentiful as all three of my kids toiled at school. Then, suddenly, I had a new dependent at my heels. Not a baby, not a toddler, but instead a little “bro” who seemed to enjoy all the same things that I did and wanted nothing more than to accompany me on my daily adventures. He bridged a gap I wasn’t even aware was about to be there following a solid 10 year run of having a steady stream of babies in my arms. Ted truly and literally makes me stop and smell the local roses. His apparent enthusiasm for just about everything is kind of infectious and I am grateful to be its daily beneficiary.

I’d loved the other dogs, but this guy is definitely different. Or maybe I am. Could I just be at a stage where the simplicity of rearing a docile pet is a welcome respite from what can be a chaotic, albeit very full and happy, life? It’s funny how I was so adamant for so long about not having the time or energy to care for “one more living thing,” and now I cannot imagine ever being without a four-legged friend again. Ever. (Fur-ever?)