First, a little background information about Multiple Sclerosis (MS). (And you can learn even more here.)

Multiple sclerosis (MS) – a neurological condition in which the body’s immune system attacks itself – affects about 400,000 people in the US and about 2.5 million worldwide. Specifically, myelin — the fatty substance that insulates nerve fibers and makes for fast conduction of the electrical information which carries nerve impulses – starts to deteriorate. The damaged myelin then “scleroses,” or forms scar tissue, giving the disease its name.

MS has a genetic component and there are environmental factors at play in its presentation as well. The onset is usually between 20 and 40 years, and women are affected two to three times more often than men. Symptoms typically present as fatigue, muscle weakness and spasticity, vision problems, bladder problems, and emotional and cognition decline with a strong link to depression. MS is a progressive degenerative disease; treatment is available, but often involves a number of medications that curtail the progression of the disease but can’t really cure it. Sometimes the side effects of these medications are worse than symptoms  patients are experiencing from the disease itself.

After Lisa Arnold’s second son was born in 2008, she was diagnosed with multiple sclerosis, and became concerned that her condition might interfere with her nursing plan. Å friend of hers recommended that Lisa contact me for lactation consulting. (I am a Certified Lactation Educator Counselor.)  It’s 9 years later and she has nursed all three of her children, even after being diagnosed. And since it is MS month, I asked her to reflect with me about her experience.

Mayim Bialik: After you were diagnosed with MS, what were your main concerns about breastfeeding?

Lisa Arnold: I didn’t think that I’d actually be able to nurse with all of the medications my doctors were wanting me to take postpartum. I was also concerned about what it might look like in terms of my nursing if I had a flare-up of my symptoms.

MB: You did a very important thing that a lot of women don’t do when they are told by an authority figure like a medical doctor, “You can’t breastfeed on this medication; you need to stop nursing.” A lot of women are afraid to ask more questions but the fact that you were able to reach out to me is huge. I can’t tell you whether to breastfeed or not based on the medications you’re taking. What we were able to do together is to find the resources, the people who study this specifically who are available and open to having conversations with moms about ways to understand and control the amount of medication in breastmilk, and then you get to make the decision.

LA: Right; you introduced me to Dr. Thomas Hale and the good folks in Texas and the research that they do, which allows moms to empower themselves to figure out what actually does cross over into milk, and helps you understand when the molecules of a medication are a [small enough] size where you can continue breastfeeding.

MB: And that’s part of what the job of a lactation educator counselor or lactation consultant is—it’s to empower the mother to make a choice, whatever she decides.

LA: Having your support was huge. Having the support of other mothers was huge. There were a few medications that you and I had discussed that were generally safe, but some concerns I had encouraged me to join Human Milk for Human Babies and a few other Facebook groups so that I could get donor breastmilk for my daughter. There are formula commercials and an entire industry supporting commercialized nourishment, but there isn’t necessarily the same commercial push on traditional nourishment.

MB: You mean nourishment the way mammals nurse their babies!

LA: Exactly! The way that society has framed breastfeeding is that it’s kind of a hippie, out-there thing. And I’m not that person; I used to be a teacher. I attended USC, I was president of my sorority, then I went into fundraising for nonprofit Jewish causes, and then after I got diagnosed, I ended up not being able to work. I am a stay-at-home; not the typical profile of what a lot of people think of as moms who breastfeed two-year-olds! But I now have family members asking me when am I going to stop… And I say, “Well she’s happy, I’m happy, and maybe when we’re not happy, I’ll stop, but right now it’s working so why would I?”

MB: I have noticed that if we do something differently from others, they accuse us of shaming them for not doing it their way. The notion of “slut-shaming” or “fat-shaming” wasn’t really around when breastfeeding politics picked up a couple years ago, but there is sort of the implication that if you support breastfeeding -especially if you support extended breastfeeding or exclusive breastfeeding – that you were formula-shaming the people who don’t. What has been so important to you about breastfeeding? Why work so hard for this when – as you’ve told me – there have been times when it has been really hard?

LA: [More recently] I have seen some research supporting that breastfeeding may reduce the risk of MS slightly for your children; I don’t think that’s been adopted mainstream, but the fact that it [now] exists out there definitely contributed to me working so much harder on it than with my two previous children when I hadn’t come across that information.

I want to make people aware of is how fantastic it is to have a sense of community through breastfeeding support. For me, I had two situations that were extremely lonely: the post-partum period is a time when women, in general, isolate: because of our need to protect our baby from outside germs, to give them the best opportunity and the best start by focusing inward, spending more time at home and seeing friends and family members less frequently, because we’re bonding, and recovering from labor and withdrawing in that sense. The second lonely factor for me was that having MS has changed the dynamics of a lot of my interpersonal relationships because of my limitations. I think what led to your involvement being much more important than perhaps I knew at the time is that the concerns of how to be a good mommy when you have either a chronic or a life-threatening disease are hard to navigate alone.

If there’s a take-away message I’d like to communicate – aside from the fact that you can breastfeed with MS – [it is that] having a community and the support of others makes the whole process much more enjoyable and successful for all.

MB: Thank you so much for talking and sharing your story. 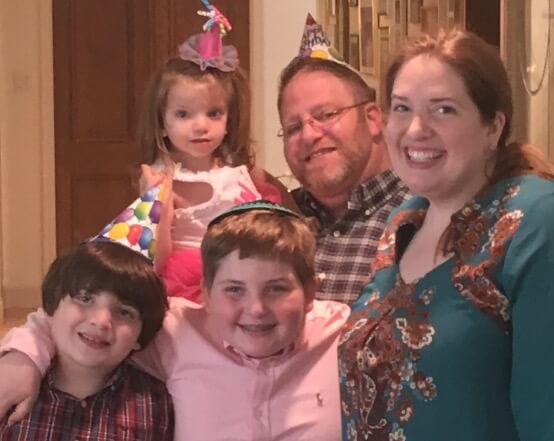 Read More From Mayim
Explore These Topics: Breastfeeding Children Parenting
More Like This: