The couch must have been glorious when my grandmother bought it. Bright pink fabric, a shining white Victorian frame with legs that look like a clawfoot tub. It was long, too, enough for someone to stretch out without bumping their head on the hard arm. My mom was only 16 when it arrived at their house on Chicago’s south side, ordered from a Sears catalog in all its colorful splendor.

I don’t remember much of the couch from its first home, just that it had a plastic custom-made slipcover to protect it. Somewhere I have a photo of my great grandmother holding me on that couch when I was just a baby, and if I really stretch my memory, I can almost feel her arms and hear the squeak of clear plastic shifting beneath us.

When my grandparents moved, the couch moved too, newly placed in our summer home in Indiana, a stately old farmhouse from the 1850s. I was still young, but I can again remember that slipcover and how it moved as I sat down—now sitting up next to my great grandmother instead of in her arms, or between my mom and my grandma. Eventually the plastic coating disappeared and the couch became an everyday fixture in our lives at the farm.

Once, after my great grandmother had passed away, my mom, grandma, and I all went shopping at a local fair. I remember coming back to the farm and sitting on that couch with them, still laughing about a shirt we found that said, “If you think I’m a bitch, you should see my mother.” The couch always had a way of collecting generations on its cushions, the importance of which I didn’t realize until that moment, when the three of us sat together in our joy, remembering my great grandma.

Eventually we sold the farm, after my brothers and I were grown. The couch moved again, this time into my apartment, the feminine pink continuing to follow in the female footsteps of my family members. I made memories of my own with that couch, just like my mom, grandmother, and great grandma did before me. 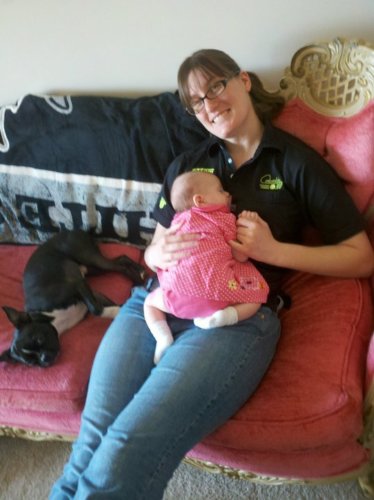 The writer with her niece on the pink couch

Shortly after my niece was born, her mother brought her to my apartment and set her down on the same pink couch I sat on as a baby. The sentimentality of the moment caught me off guard. I felt like we’d come full circle—a fifth generation had finally been introduced to the couch. Visions of the women in my family appeared next to my niece: the ghostly specters of my great grandma and my grandma. The image of my mom and I, both very much alive. For a moment in my mind, we all sat together with my niece, enjoying memories of a sofa that had morphed into an integral piece of fabric in our family’s quilt of motherly tradition.

After about 50 years of use, the couch is now languishing in my garage. I’m thinking about getting rid of it—it’s not the least bit comfortable anymore, some of the fabric has worn away, and to be honest, it smells a little musty. But when I look at it, I still see vestiges of the life it led. My mom arranging us all on it to take a family picture. My grandma putting my brothers and I together on the couch in time-out when we weren’t behaving. My great grandma, watching us play Atari on the floor from her perch on one of the cushions. My mom again, curled up on her side, sleeping.

The couch has known us all since before I was born; it’s a part of my family. It’s going to be hard to trash it. I just need to make myself understand, though, that it’s just a couch. It’s the glimmers of life and memories that are important—objects don’t make up the legacy of mothers and daughters, but rather the lasting experiences you share together that may seem meaningless at the time. And whether I have the couch or not, those special moments can never be taken from me.