Moms trying to have a Hollywood career and fulfill the needs of their family are often on their own to juggle childcare with on-set responsibilities and figure out a way to make the balance work. Now, a new organization called Moms in Film aims to support mothers in the film and television industry by providing community, advocacy, and funding. Mayim recently interviewed Mathilde Dratwa, founder of Moms in Films, and Christy Lamb, MIF’s director of strategy and development, about the situation for moms on set and how men and women can work together to change it.

Mayim Bialik: How did Moms in Film come about?

Mathilde Dratwa: I had a baby and I’m a filmmaker and realized it’s really, really hard to juggle both. I wrote an article about it and people responded to what I was saying and Christy was one of them. She immediately said she wanted to become my partner. Christy is in LA and I am in New York and we started doing meet-ups with established filmmaker moms in the industry who have shared insights with us about their needs and the challenges of juggling both of these roles. One of the key issues that kept coming up was the need for childcare: our first program as an organization was to pilot the Wee Wagon, a mobile childcare trailer that can be used both on set and at film festivals, so that there is a play base where children to play while their parents are working near by.

MB: What a fantastic idea. I read that the Wee Wagon was present at the South by Southwest festival, to help moms with childcare, provide a place for quiet nursing or to connect with other industry moms at the festival. Talk a little bit about what the process has been like and what the plans are for Moms In Film going forward.

Christy Lamb: The Wee Wagon is probably one of the most forward-facing public advocacy tools that we have in motion. We are looking at the Wee Wagon model right now as something we can utilize on set, on studio lots, or locations, for larger feature motion pictures, by way of establishing those relationships with larger projects, ideally in production as well as presentation in film festival settings. We’ll be able to offset smaller scope launches, as well, for independent projects and independent festivals. Both of these models, I hope, will be available for some advocacy and lobbying around; we hope to spread some love and put into motion in place to get tax incentives., so these can be utilized on set. This is probably one of the more practical solutions that we have come across, and so we are looking to utilize the Wee Wagon in the larger strategy to retain parents in the film industry and to support parent-friendly practices. And also, we are in the process of getting our own non-profit status in place.

MB: I went back to acting after my second son was born, and we would all have to go to auditions as a family, with me leaving an unhappy breastfeeding baby, a toddler  and an unhappy then-husband in the car while I auditioned.

MD: I’m from Belgium, so as an immigrant here really, I was shocked by the lack of provisions in place to support parents. A lot of European countries have some sort of paid maternity leave even for freelancers, which is an amazing progressive system that supports artists. So, to me, coming here from somewhere else, I realized that this country has given me a lot of amazing things, but one area where I think a lot of progress can be made is in caring for parents and families.

When I started doing research I realized that the companies that do provide really parent-friendly practices, like Patagonia for example, has this amazing on-site child care and what they noticed was that they retain a hundred percent of mothers, and that parents of both sexes are incredibly satisfied with their jobs. So tending to family needs at work benefits parents of both genders and there is also a direct link to gender equality. A lot of people talk about gender inequality in film and I think that conversation has to go hand-in-hand with what are the parent-friendly practices that we can offer. That is part of why there aren’t enough women. Who doesn’t want an industry – whether it’s film or something else- and who doesn’t want a society where families are happy?

This shift requires women in leadership positions to ask for these provisions, or else we won’t see them happen. And it requires men to put some infrastructure in place because men are largely who are being listened to.

I had a meeting at a children’s museum recently, and the people who work at the children’s museums kids are in daycare far away. It doesn’t matter what field you’re working in, the proximity to your children and the time spent [is important].

MB: Working with a toddler and infant was a real challenge for me so what you are doing really touches me as a mom, and as someone who sees an industry that has shifted a lot in terms of the demographic – so many people have kids now and want to bring them to work!  I really appreciate so much what you are doing. My hope is that everyone who wants to do production has access to this.

MD AND CL: We’re thrilled that you are interested. Thank you! 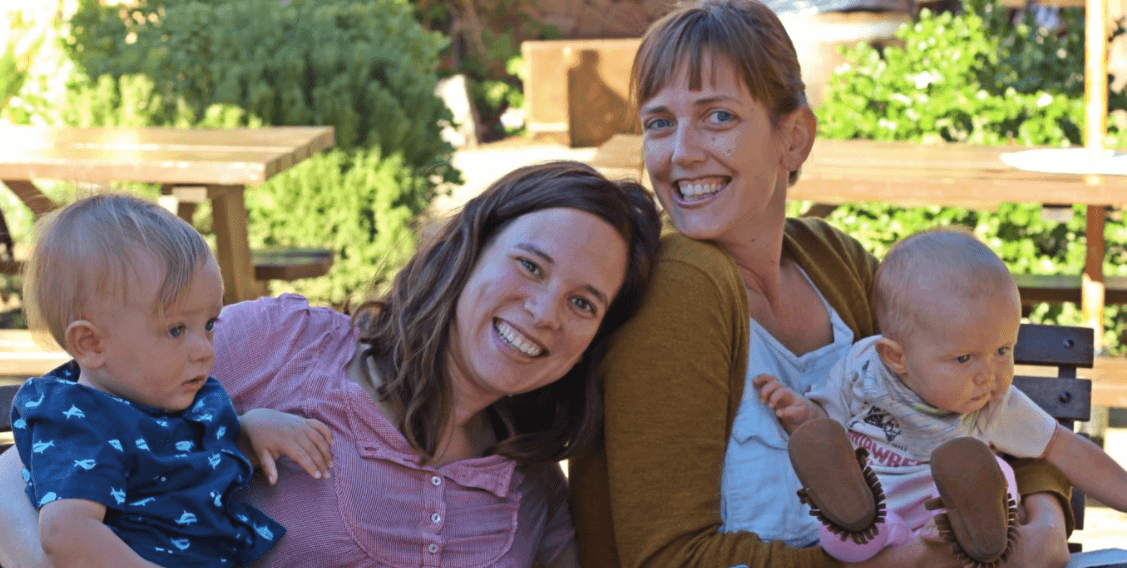