Ayla, my 8-year-old, likes to write in bed before she goes to sleep. The other night when I went to check on her she handed me a Hanukkah wish list. Basically she wants a couple of books and every toy pet on the market. This is either proof of effective advertising or of how mean I am for refusing to get her a real live dog. Both, probably.

It got me thinking about what her brother Benjamin wants this year, so I asked him. He surprised me by actually answering.

To make sure it wasn’t an arbitrary answer, one he was likely giving me because he’d just heard me tell his therapist that his favorite Laffy Taffy flavor is Wild Blue Raspberry, I asked him again the next morning when I was trying to get him out of bed for school. 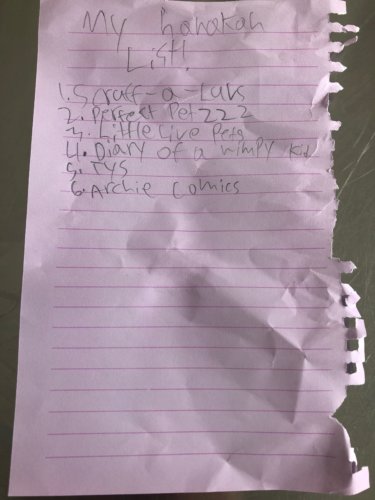 “Banana taffy. Yellow,” he said before pulling the blanket back over his head.

This whole interaction was cool because it’s probably the first time Benjamin, who is 15 and has autism, has answered a version of the same question I’ve asked many, many times over the years. But I still wasn’t fully buoyed by our authentic and appropriate exchange, and not because I was wrong about his favorite flavor. I’d been hit by a strain of that same, vaguely or not so vaguely disappointing feeling that used to wash over me when he was small and Hanukkah or his birthday came around and everyone would ask me what he wanted and I couldn’t name a single thing.

“He doesn’t like anything,” I would think to myself and occasionally say out loud, mainly to my mother because I didn’t care if I made her feel bad about making me feel bad.

My ultimate dream for Benjamin was that he would unwrap a gift, look at it with real interest and/or excitement, and then play with it—hopefully in the way it was intended to be played with.

At first this was because I thought the true meaning of progress was him becoming like other kids, and later because I just wanted to finally witness that sweet moment when someone carefully chooses something for a child and gets to watch the kid feel like his life—or at least his afternoon—has been vastly improved by this shiny new thing. I’d been robbed of this essential part of parenthood, and that seemed so unfair.

He cares about stuff, but not how most of us chronic acquirers do. Sure, he needs certain things around him set up in a certain way in order to feel organized and safe and relaxed, but Benjamin is the opposite of materialistic. He is certainly not influenced by the pretend pet industry—or any other industry, really. Well, except for maybe the sugar industry.