This Sunday is Grandparents Day. The relationship between a grandchild and a grandparent is a special one, as the stories below illustrate. Read our memories of losing at scrabble and receiving grandmotherly encouragement. Tell us about your grandparents in the comments. And if you are lucky enough to still have grandparents, make sure to call them on Sunday! 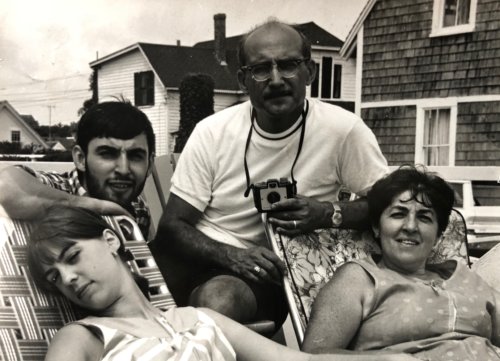 This is my mom at about 20 years old with my dad and his folks in Long Island. My parents had gotten married about a year and a half before this was taken. Everything about it is awesome. My dad’s beard, my grandpa’s Brownie camera, my mom looking like a kid (she was!) and my grandma holding my mom’s hand out of frame. This was before they were my mom and dad. They were a young couple staying out.

Editor-in-Chief
My grandmother, Mary Vorel Burr, was born in 1915 in Manhattan. Her mother emigrated from Ireland and worked as a housekeeper for a wealthy family; her father was Czech and worked for the same family. I’ve been told they lived in the home where they worked. Grandma retained a lifelong disdain for the rich, which she passed on to my mother.

My grandmother graduated from high school, and that was quite an accomplishment for someone of her time and place. She kept her class ring always. She and my grandfather had five children; my mom was her oldest. Her youngest, Edward, died of leukemia when he was only 6 years old. She lived through tragedy, poverty, wars, the Depression. When I was a child, I saw her often, since we lived nearby in the Bronx. She was always busy doing something. She grew tomatoes and roses in the yard of their building, where my grandfather was the superintendent; she had multiple houseplants, did beautiful needlework, crocheted afghans for everyone. I still have one on my bed. She cooked giant meals and fed us all. She had a job at Alexander’s department store when I was little and often bought us presents there.

My grandmother walked everywhere, drank a lot of tea, adored cake and bread and never touched a drop of alcohol. Sometimes after a long walk she would take off her shoes and say: “my doggies are barking.” She voted in every election. Lawrence Welk was her jam, and she never said no to a free outdoor concert. She was quite good at cards. Pinochle was a favorite. I wish I could recall the rules now! 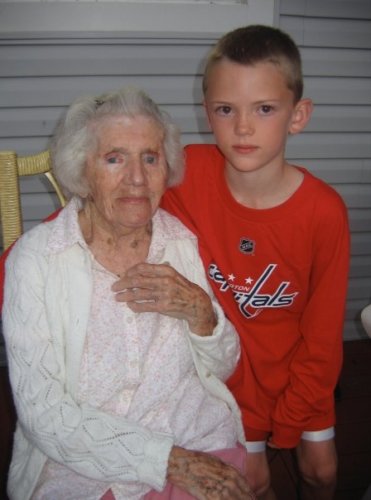 My grandma was in her 90s here with my son, Dale, who just went to college.

When I was at college, freshman year, I got a letter in my mailbox from Grandma. She wrote that she was so proud that I was off in college studying for my “chosen career.” Those were the exact words. I remember being touched, and also a little surprised. I guess I didn’t realize that in my industrious grandmother’s chest beat the heart of a feminist.

Grandma loved children, and when mine were born, she often played Uno with them. In fact, on Labor Day weekend right before she died, she beat us all in Uno. Thanks for everything, Grandma! RIP.

Managing Editor
My great grandma was one of the sweetest people you’d ever meet—unless you were playing against her in Scrabble. That was her game. And she took it very seriously. Whether she was playing friends or her own daughter, Grandma Paulene didn’t allow for any slacking on the rules. She had no problem calling out her great grandkids when she said we were taking too long, made up a word, or didn’t play a word she deemed worthy of the board. 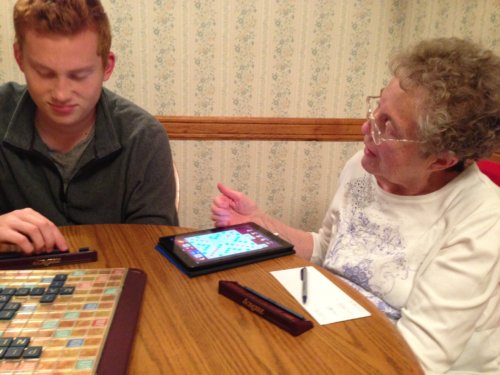 My grandma Donna playing Scrabble with my brother, Jonathan, while also playing someone on the Scrabble app on her iPad. Here, she’s probably asking my brother, “That’s all you could play!?”

Later in life, she moved in with her daughter, my Grandma Donna, who shares her love of the word play game. Some of my most cherished memories as a young adult are playing Scrabble with the two of them at the kitchen table. But the two of them together did not let anything slide. A game never passed by without one of them saying, “Oh, you could play better than that.” Now, they wouldn’t give us the chance to change it—that’s against the rules once letters are placed on the board—they just wanted us to know we weren’t playing at their level. We always lost to both of them. (When the Scrabble app first came out, my Grandma Donna would play on her iPad. I beat her a few times, but she stopped playing with me because I was “too slow.”)

One of the last times I played with my Great Grandma Paulene, she played a word that wasn’t a word. I called her out on it, and she got this innocent look on her face and said in sweet voice, “Oh, you won’t let your old great grandmother play that word?” I wouldn’t. Because she taught me better than that.

Social Media Manager
My mom’s parents, Agatha and Otto Schmidt, were really wonderful grandparents with an amazing love story. They met shortly before my grandpa was sent to work on fighter jets in WWII. They sent letters to each other the entire time he was gone, he named one of the fighter jets “Gatha” after my grandma, and he secretly converted to Catholicism so they could get married upon his return. When he got back to New York after the war, my grandma burned all their love letters to, I imagine, preserve their story in their minds alone. I’ve always thought that was so romantic, but kind of bananas, because I would love to have read them! 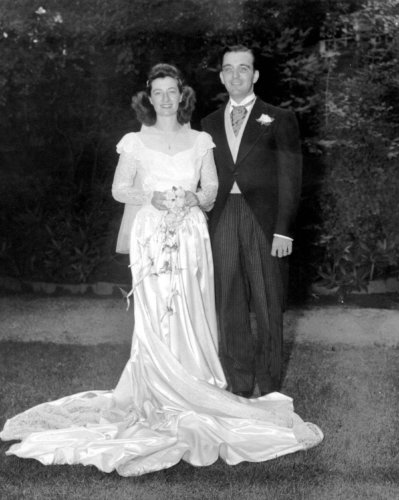 My grandparents on their wedding day.

Contributing Editor and Writer
My Bubby cooked like it was second nature to her. Whether it was whipping up pancakes, setting up a stock pot for matzah ball soup, frying chicken for schnitzel, or effortlessly baking a babka or a tray of rugelach, everything she made tasted incredible. Part of the way she shared her love was through her food, and despite how much I absolutely loved all of it (OK, maybe not the chopped liver), I’ve never quite been able to recapture her magic. 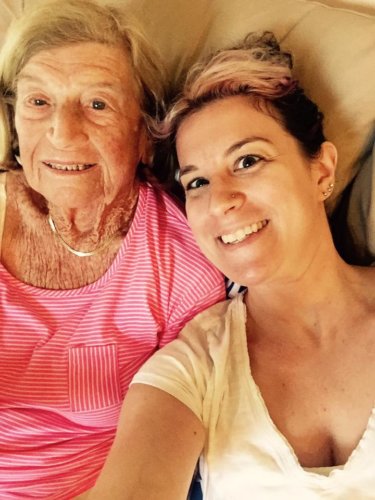 Taking selfies with my Bubby in 2016.

She died last summer, and the past year has been hard—particularly around the Jewish holidays, without her special flanken tzimmis (a sweet and savory carrot, prune and meat dish), stuffed cabbage, and melt-in-your-mouth brisket. She always included me in the kitchen, never making me feel like I was underfoot or slowing her down. She simply incorporated me into the bustling work she took on, whether it was a holiday meal, for the Sabbath, or just a weekday dinner we happened to join her and my grandfather for. I may not have inherited her skill in the kitchen, something that crushes me each year the High Holidays come around. But I’m thankful for the multiple memories of being able to eat at my Bubby’s table, at her side.