Mayim Bialik: So, Samantha, you have written both for Kveller, and also for Grok Nation, about of some of your experiences parenting Aaron, Joey and Billie. You and your husband have been on quite a journey as you raise Joey, who has high-functioning autism, and Aaron, who was recently diagnosed with a learning disability.  Would you tell us about your kids, starting with Joey?

Samantha Taylor: Joey is twelve years old now, and starting around 16 months, we noticed things were not developing typically in terms of developmental milestones. So since 16 months he’s been in some sort of therapy, and my husband and I have been on a journey to figure out what is going on with him. We’ve seen dozens of professionals, including developmental pediatricians, psychiatrists and behavioral modification specialists. When he was 11, he was finally diagnosed with what used to be known as Asperger’s but is now known as high-functioning autism. He was also diagnosed with GAD (general anxiety disorder). He also is a savant and has exceptional intellectual and computational abilities.

MB: What was most surprising about this process?

ST: What surprised me was how long it took for the professionals to figure this out. I am not a “head-in-the-sand” kind of Mom who’s in denial about my kids having issues. I knew there were issues and I couldn’t understand why people didn’t give us the appropriate diagnosis for so long.

MB: Aaron is 9 ½ now. What was Aaron like developmentally, compared to Joey?

ST: He was typically developing – always on the slower end of the curve – but he was a normal developing boy.

MB: Your Aaron and my Little Man, Fred – who is about the same age – started writing letters to each other last year. And that is when you started talking to me about some of the issues Aaron was having academically as they related to the letter-writing.

ST: At the beginning of second grade, his teacher said he was doing very well in every subject, except he was struggling with writing: his handwriting was very sloppy and he would cry when he had to write. And when I tried to do any sort of writing with him, whether it was his homework, or writing a letter to your son or a thank you note (which I make my kids write for every birthday gift they receive!), it was beyond frustrating because he wouldn’t be able to do it. I admit that I have totally yelled at him: “I AM TELLING YOU TO WRITE THE WORDS ‘DEAR FRED’!!!”” and he would say, “I can’t! I can’t!” and I thought he was being lazy which I now feel awful about.

MB: And that point, my ears perked up, as a neuroscientist friend…

ST: (laughs) Everyone should have one, by the way…

MB: (laughs) I did not want to open my mouth and say what I was thinking about Aaron because knowing what you have been through with Joey, I didn’t want to make you nuts… But I said, “Have you ever had him assessed for a learning disability”? And I remember you said, “Why would I do that!?” I told you it sounded like he might have a version of Dysgraphia, a processing deficit in written language that has nothing to do with intelligence; it’s literally an inability to communicate in writing.

ST: Right. In all honesty, when I first heard that Aaron was crying about writing in class, I immediately had him start working with Joey’s mental health counselor to address the emotional part. He’s always been a highly emotional kid, he’s always cries easily: I am a crier, too. But between my conversation with you and subsequent conversations with his tutor and his teacher, I started reading about dysgraphia, and only about 10% of the descriptions matched Aaron. I wrote you and I said “Thank you for sharing this with me; I always want to hear what you have to say; [but] I don’t think this is what’s going on.”

MB: And I said that especially with these kinds of learning disabilities not everyone is going to be a textbook case; the brain is a very dynamic and complicated structure. We have these words and these diagnoses because they encapsulate a general set of symptoms which you will statistically see present.  There are always going to be exceptions.

ST: Right. So we had Aaron tested. The evaluation was about six or seven hours of testing over the course of several days. It was done by a school psychologist, and it showed that he excels in math, reading, spelling, and solving puzzles. But when it came to writing, it was crystal clear that there was something seriously problematic going on. One test had him tell a story and write it down; he literally could not write down the story he had just made up. So he indeed has a specific learning disability in written expression which she labeled as Dysgraphia. The first thing I did when I got out of that evaluation summary was to text you!

These kinds of ‘spectrum’/autism/aspergers/ ADHD diagnoses are so much more prevalent now, for a lot of reasons. And there’s a lot to consider when we throw these terms around, especially with boys, who are often more prone to being active and fidgety in a classroom setting.  Do you have any thoughts about what you would do differently, what you are proud of, and how this has made you see being a parent differently, if at all?

ST: I’ve always been really proud of myself for seeking the opinions of the people that I’ve found to help us. I’m starting to get emotional because clearly it is a very personal and sensitive issue. With these kinds of challenges, you grieve for what you thought your parenting experience was going to be, and you grieve for what you thought your child’s experience was going to be in life. And once you compartmentalize that grief, then you have to move forward helping them.

Specifically I’m talking about Joey right now. Before we even had him we [my husband and I] had these expectations he was going to go to our fabulous University of Florida, and become a computer engineer, and do all the things that we thought he was going to do.

When you get to a point when you realize that may not be the path, and in fact he may have a completely different journey than what you expected him to have and that you’re not going to have the social butterfly you thought in your mind you were going to have, you have to readjust your expectations, and help him be happy. We want him to be happy, that is our number one priority; we are doing everything in our power, to make his life as easy as possible. I cannot imagine living with the sort of anxiety he has; I can’t imagine living in a world where social situations are so difficult. I am really proud of us, for making the decisions that we’ve made, and for making our lives much more complicated to bring him to a school much further away, exactly where he needs to be and disrupting the lives of our entire family to take him to the social skills classes that he needs to go to, the therapy he needs to go to.

MB: I will shop at his comic book store.

ST: Thank you! I appreciate it!

When it comes to Aaron, when I got that diagnosis, I felt a combination of guilt and pride as well, because, I feel guilty that I yelled at him, I just go back to me yelling at him, writing his thank you notes for his birthday and probably sending him to his room for not listening, for being lazy, and then I am proud because the school psychologist said we caught it early enough that he will have the accommodations he needs to be successful.

MB: Obviously it doesn’t make you “more” of a parent because you’ve had to deal with these challenges, but do you feel like there’s any sort of special insight that is sort of your incidental advantage because of what you had to deal with?

ST: God, I look at parents with kids with no special needs, and I think to myself, “They have no idea!” I look at these beautiful families with beautiful children who don’t go to therapy; they have so much free time without therapy! The big joke around my house is, “our daughter better be normal…”

MB: I feel like having a child who is “special” has made me less judgmental as a parent and it’s given me a lot more compassion because when I saw kids crying in the street and the parents not reacting, my immediate assumption used to be, “they must be bad parents and they don’t care about their kid.” Unfortunately, in a lot of cases, there are people who believe not responding to a crying child is a good way to make them stop crying, but I have been that parent so many times; I have so much practice being present with a child who is very easily activated, triggered, and oftentimes hysterical and I know there must be people who look at me and say “She doesn’t know what she’s doing!”

ST: I feel like there is this club for parents with special needs kids, and I’m way more sensitive to it than I was before. I was at Target a few weeks ago, and there was a twenty-year-old young man with autism next to me in the LEGO aisle. And it was clear that this guy was definitely into LEGO – it was one of his things – and he came up to me and said, “Can I help you? What are you looking for?” as if he worked there. And his mom had this panicked look on her face and I looked at her and smiled and said “No, no it’s ok; Let him help me.” And we had five or ten minutes of all the things he wanted to tell me about LEGO. I would not have done that fifteen years ago, and I didn’t tell her that I had kids with special needs; I didn’t need to.

I started a Facebook group called Special Moms with Special Kids, and we have probably a hundred and fifty moms on there who mostly don’t know each other, but we help each other out, from things from “Do you know a therapist who does this?” “Have you tried this medication before?” to “I am having the worst day of my life, can anyone relate!?” and we put it all out there. It’s almost better that we don’t know each other, because there’s no judgment, there’s no secrets, and it’s been one of the best things that I’ve ever done, to create this forum for parents.

MB: This is all great. Thank you so much Sam! 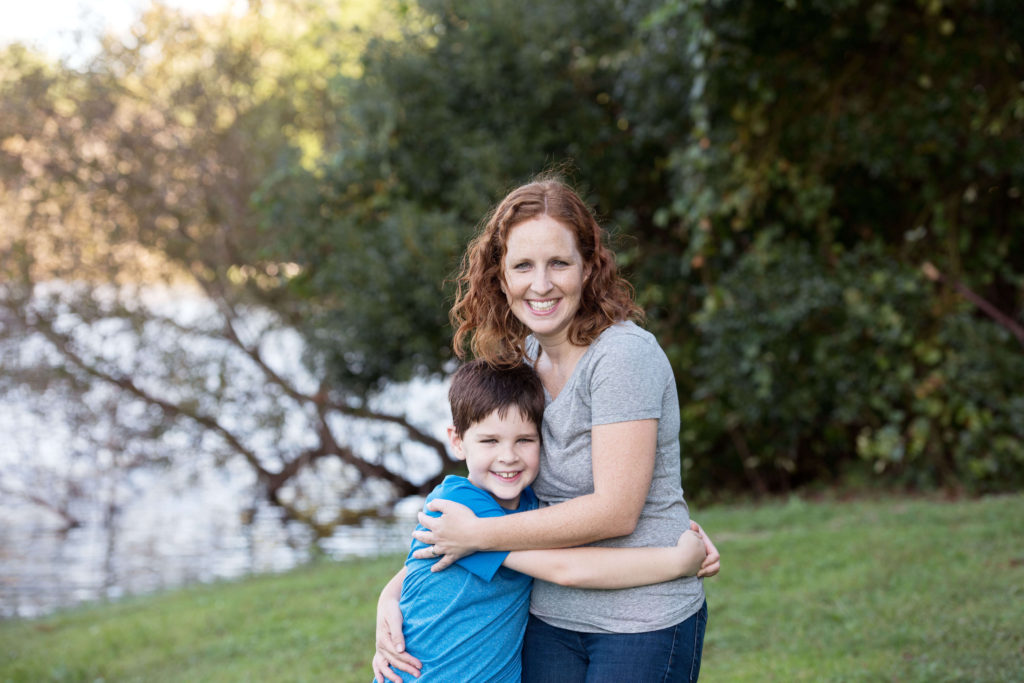 Nobody’s Perfect: A Story for Children About Perfectionism

A Parent’s Guide to High-Functioning Autism Spectrum Disorder, Second Edition: How to Meet the Challenges and Help Your Child Thrive

Read More From Mayim
Explore These Topics: Autism Parenting
More Like This: