I ogle the total at the bottom of my wedding expenses spreadsheet for the fourth or fifth time. I laugh at the number rather than cry. I check the amount in my savings account. I laugh again.

My mother, who is at the stove sautéing onions for a Portuguese soup, hears me, sets down her ladle and looks over my shoulder. Her caramel eyes fill with tears, and she uses the battered dish rag she flopped over her shoulder to wipe them.

“I wish I could help more,” she says through sniffles. “I want to give you everything. Your father and I…”

She stops there. She doesn’t need to finish the sentence. If she did, she would say that now that my father is dead, everything has changed. Instead, I tell her, “I know,” and cover her hand with mine.

What if my father hadn’t died? What would my mother’s life look like today?

My father emigrated to the U.S. when he was 18 from the small island of São Jorge, Azores—an archipelago off the coast of Portugal. As the son of a poor dairy farmer, he had wild dreams of streetlights and skyscrapers and success. He settled in the suburbs of Boston, MA, and began accumulating odd jobs cleaning offices and pumping gas. After meeting my mother at a Portuguese feast and quickly marrying her, he knew he needed to find more serious work if he was going to support a family.

He formed contacts with anyone who would listen to his broken English—plumbers, electricians, construction workers—mainly, other immigrants. He found work for a local flooring company, but his nights and weekends were filled with jobs for friends who were less handy than he. Those friends had friends of friends. Eventually, my father had enough clients to strike out on his own. For nearly two decades, Lino Chaves Flooring thrived and so did our budding family of five. My father truly was the epitome of the American Dream.

But dreams are fragile. They shatter as easily as glass.

In 2007, two weeks before my freshman year of college, my family was visiting relatives in São Jorge. Three days before our scheduled departure, my father and uncle were in a car accident. My uncle survived. My father did not. 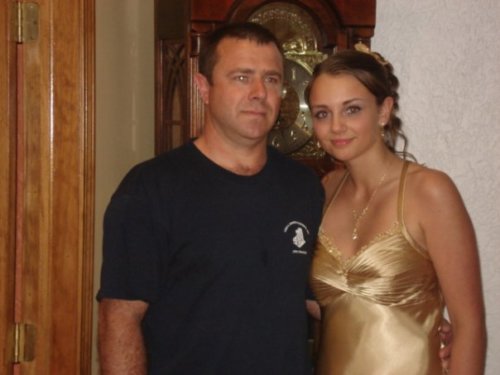 Sarah (all dressed up for prom) and her father (who had just returned home from work), a few weeks before his death

In an instant, our family’s breadwinner was gone with no life insurance to sustain us. My mother, a stay-at-home mom, was left with nothing but her hands and a weakening back. Soon enough, when the savings she and my father had put away were nearly depleted, she went back to the life she led before my father built his flooring business: cleaning to support me and my two siblings.

The skin on her fingers cracked with all the bleach she sprayed on miniature daycare toilets. Her knees shone red and her lower back burned from all the mopping, vacuuming and dusting. For many years I begged her to find less laborious work. An office assistant? A service clerk? But with no more than a high school diploma, she shooed me away.

In other words, her life was built with her hands and not her mind. I remember the admiration in her eyes when she saw my father’s blisters, bulging biceps, sweat-stained T-shirts. She was in awe of his physicality, the bodily strength that sustained him.

Me? I remember pitying my father. I remember my thirst to build a life that wouldn’t mirror my parents’.

But where has this thirst led me?

I recheck my wedding spreadsheet. When, once again, I get the feeling that I might cry instead of laugh, I close my laptop. In the upstairs living room, there’s a bottle of Chivas Regal whiskey tucked away in a wall-to-wall mahogany entertainment center my father built. It is a giant bottle that is heavier than a small toddler. As I am my father’s first and only daughter, he bought it to be opened on my wedding day. I let my fingers trail the edges of the wood, collecting dust as they go. I heave the bottle off the shelf and hold it close to my chest. I carry the bottle like a baby as I walk about the room, admiring my father’s handiwork. The entertainment center. The floors. The staircase. The thin spindles on the banister.

I think about my own home—a basement apartment with no familial heirlooms or extra rooms to build a family. I have no idea when my fiancé and I will be able to afford the down payment on a house of our own, let alone have enough money to create the type of home my father built.

I have degrees, a bachelor’s in writing and a master’s in English, something my mother and father never sought. It was my dream to turn away from labor, to turn away from the calluses and cracks that defined my parents’ hands. My hands are soft, my fingernails bitten. My hands show a map of endless typing for writing I have long since forgotten, an endless banter of words that no longer echo.

Is this the life my father envisioned for me when he first held me in his arms? It is a life without labor and an education beyond anything he could have imagined, but it is a life chained by debt. I fear I have dug myself into a pit so deep I cannot climb out. Student loan bills with added interest. Maxed out credit cards. Increasing rent. A humble teacher’s salary.

My degrees hang on the wall next to the bookcase in the same room. I stand in front of the glass frames and catch my meager reflection. Is this all I have built for myself? It seems insignificant in comparison to my father’s accomplishments. I look down at the whiskey bottle still in my hand. Its weight, and meaning, overpowers me. I hobble over to the center and set it down in its place.

In a few short months, the bottle will be opened. Surely, there will be tears amid the clinking of raised glasses. I will cry, too, for my father who isn’t there, but also for the dream that has gone with him.