It was bedtime. My son’s voice was a whisper in the dark. I brought his body closer to mine. Thank goodness sleepiness pulls the truth from his heart. Surely, though, a 4-year-old should still be able to play dress up with joy and abandon. These girls saddled him with an awareness I wish I could take back.

When I was his age, I was supported in breaking stereotypes. I want the same experience for my son.

I feel lucky that I grew up in a time of change. Family, friends and society were all stepping in a new direction. They supported me in breaking what had been traditional girl stereotypes: I wasn’t expected to play with dolls and cook in a pretend kitchen. I played with cars, action figures and even wore clothes from the boys’ department. (I looked amazing in a polyester pant suit.)

On his own, my son chooses to play with dolls, tea sets, cars and pirate ships and takes a dance class. I follow his lead. If it’s time for a new toy and a tea set is what he chooses, then a tea set is what he gets. (Also, he makes great tea.) I’m not going to talk him out of his choices because of his sex—because society (and his peers) tell him he should choose differently.  I’ve been shocked to find that this method of parenting boys does not seem commonplace. 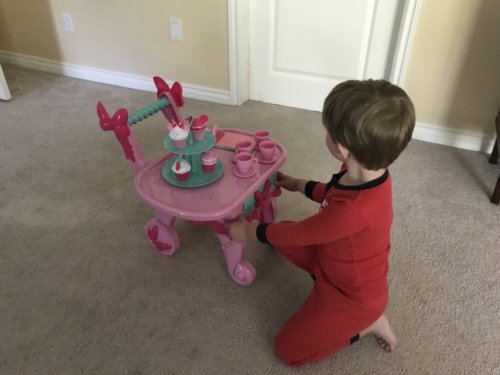 The writer’s son playing with a tea set

This notion hit me hard when shopping with my then 2-and-a-half-year-old. He wanted a tiny pink umbrella. The cashier was so surprised, she felt compelled to compliment us on our courage (and then gave it to us for free). She made me think, Is this a big deal?

Soon after, I came upon a viral video in which a father bought a doll for his young son because his son had asked for it. It was refreshing to see a father supporting his son’s atypical toy choice. Then it hit me: This video is going viral! It’s going viral because people are fascinated to see a boy buy a doll!

I tried to imagine a mother and a young daughter posting a video of a the little girl purchasing a toy truck and the video having the same impact—no way. Society watched transfixed as a little guy broke a traditionally feminine boundary. It’s not the norm. But shouldn’t it be?

“Mom, girls at school told me I couldn’t wear princess shoes when I play dress-up.”
“How did that make you feel?”
“Sad. I thought they were making fun of me.”

A 4-year-old can feel criticism. A 4-year-old can feel shame. This changes a person. That night we talked a lot about how boys can wear whatever they want. I told him he was free to wear girl clothes just like girls were free to wear boys clothes. I explained that I was proud of him for teaching those girls that boys can be whoever they want. I heard his voice lighten as we talked. I hoped maybe I had soothed his tender heart.

In a world that labels things by gender, my son just likes what he likes. I want him to feel free to follow his heart. I want him to grow up feeling confident. I worry that these archaic “male” expectations will stifle his developing personality. I worry that he will lose the best parts of his creativity.

I will continue to follow my son’s lead in expressing himself, for he is the true boundary breaker. I’ve seen some others out there with him: a young boy (or two) sporting a lovely princess dress for Halloween, and it gives me hope.

I’m thrilled we are encouraging our girls to see themselves as strong people who can do anything. My wish for my son is that this support begins to play on both sides of the playground—with a doll and a car for them all to ride in.