I take my son, who’s two months old now, out of the house a lot. I mean, a lot. There’s hardly a day that goes by that I don’t pack up the stroller and take him to a coffee shop or the library while I work, or to the mall just to walk around, or to a restaurant so that I can grab some lunch. I’ve been doing this since he was 10 days old, sometimes along with my wife, but many times on my own.

The reasons vary: As a freelance writer I get that feeling of being cooped up pretty quickly, and the change of scenery is necessary; my son sleeps really well in his stroller, so being out and about is perfect for daytime naps; it gives my wife time alone to sleep, read, shower, and do all those things that make you feel like a person and not just a breastfeeding machine. On top of all that, I’ll be a stay-at-home dad in just a few months, and the daily trips are a sort of trial run for what a work-life balance might look like for me when that happens.

During this time, I’ve encountered something I knew I would, and yet still wasn’t entirely prepared for: endless praise from complete strangers. In my heart and in my head, I’ve always known that dads taking any sort of active parenting role get a lot of praise and attention. I’ve known this for a long time because I’ve always been good with kids (growing up with a mom who ran a home daycare was invaluable), but to actually experience, and to see how constant and common it is, is totally different.

Look, babies get a lot of attention in public, especially newborns. You can see the eyes of people around you sneaking peeks into your stroller, and some just straight up walking up, starting a conversation, and getting right down to sticking their face into the baby’s space. Every parent has had these moments. But dads in public are even more prone to attention, as if rare creatures seen out of their natural habitat.

There’s no denying that, for the most part, these strangers mean well. When a lady says it’s nice to see me out with my son, she means it. She means it’s nice to see me actively involved, and that is a good thing. And there’s no denying that some of the attention is validating, the need for some sort of confirmation of competency (and baby cuteness) present in even the most confident, assured parents. There’s certainly nothing malicious to the interactions I have when I’m in line at Starbucks or am reading a book and sipping on a beer at our local pub while my son sleeps in the stroller next to me. But they’re interactions that reveal a larger social, gendered construct that’s troubling. 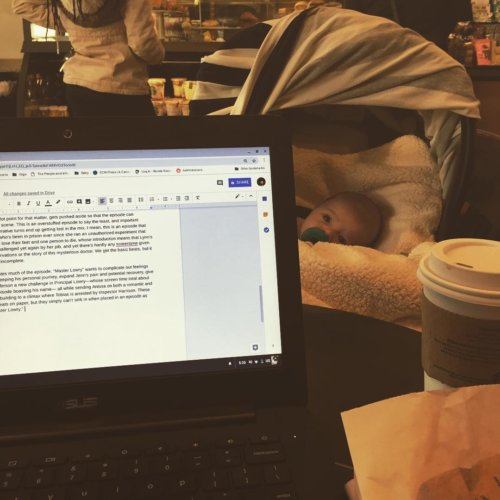 The writer’s baby hanging out a coffee shop while his dad works.

The trouble takes shape in two distinct ways: there’s the fact that men—and I specifically mean straight men in heterosexual relationships, because there’s a bevy of other toxic perceptions about homosexual partners that I’ve certainly never experienced—are given an easy pass when it comes to childcare, and are heaped with praise when doing the bare minimum of emotional and baby-focused labor that women are simply expected to do. I can’t even imagine my wife, or any other mother, being applauded for her hard work and involvement in her child’s life while she’s pushing a stroller in the mall. Then there’s the fact that while the bar being set so low definitely allows for rapturous praise, it also means that the baseline assumption about any dad is complete incompetence. A few months ago I wrote an article for Grok Nation about how parenting books aimed at dads assume we’re all clueless dolts who can’t fathom the basics of taking care of a child; public interactions bear a similar tone.

So, it’s frustrating on a number of levels to be a dad in public. There’s a tremendous guilt, and more than a fair amount of annoyance, when you’re praised for simply doing exactly what you signed up for. The other day, while getting my son all bundled up in his stroller before leaving the mall and heading out into the kind of specific cold that comes with a Canadian fall, a middle-aged woman approached me, took a look at my baby, and said, “That’s so brave of you to be out with him alone. Good for you.” I was taken aback. “Brave” is certainly a descriptor that crosses into the territory of the ridiculous, but the meaning behind it is all too common. Embodied in that interaction—and in so many encounters I’ve had in the first two months of my son’s life—is both the idea that a man doing the least required of being a parent is somehow remarkable, especially when that work is typically considered “woman’s” work, and the idea that incompetency and cluelessness is the default for men.

Those perceptions need to change, especially in a world where the very idea of a single breadwinner is dying quickly. Feminism has long sought to change how we think about and value emotional labor and taking care of children, and it’s a fight that can benefit every parent, regardless of gender. If the labor of child care is valued culturally, politically, and socially across genders—which of course means men appreciating the work their wives do if they are the primary caretaker—then the baseline for men rises as well. If that labor is valued in a significant way, then the presumption of incompetence for men should slowly disappear.

Shedding dated gender roles is a worthwhile endeavor, and as men, we can contribute meaningfully. We can be more active parents and partners, we can work to dispel the idea that we’re hapless and incompetent and instead take pride in our domestic side and refuse to make jokes about it because we feel our “masculinity” is threatened, and we can value the work itself. We can create better perceptions all around, and raise well-rounded kids free of gendered expectations while we’re at it.