The other night we went out for pizza.

“Look,” I said to my husband, gesturing in the direction of a blackboard, the kind that lists the specials. Instead there was a chalk-written message proclaiming the restaurant’s support for autism.

“Hmmm.” He barely turned away from the TV to glance at the statement that probably included the name of an organization and a ribbon filled in with primary colored puzzle pieces. It was lovely yet vague, like a bumper sticker or a building lit up blue.

We’re all about supporting autism, too, mainly because our 14-year-old son is on the spectrum. The way we do it could maybe sometimes be called lovely, but it’s certainly never, ever vague.

Benjamin used to hate restaurants. Not for any particular reason, other than that they were places that were not our apartment. He would scream and cry and flail just getting through the door and often throughout the entire visit, and he’d never eat whatever salty, crunchy dish we’d optimistically ordered for him. I would look at other families—families whose kids were coloring their paper placemats and devouring french fries and speaking actual words—like they were aliens.

Things have changed a lot since then. That night at the pizza place I was drinking a beer, and our other two kids, who are typically developing, weren’t even fighting or begging for soda. Benjamin was happy, too, but slightly restless, so I suggested he check out the open kitchen, where the dough was stretched out and dressed before it was slid into the coal fire oven.

Food preparation—doing it, observing it, talking about it in his limited way—is Benjamin’s number one favorite pastime, and he watched this live action exactly how he watches Youtube cooking videos, which is to say as if it were the pivotal scene in Fatal Attraction. He was transfixed and also excited, standing thisclose to the partition, jumping in place and flapping his arms with great vigor. 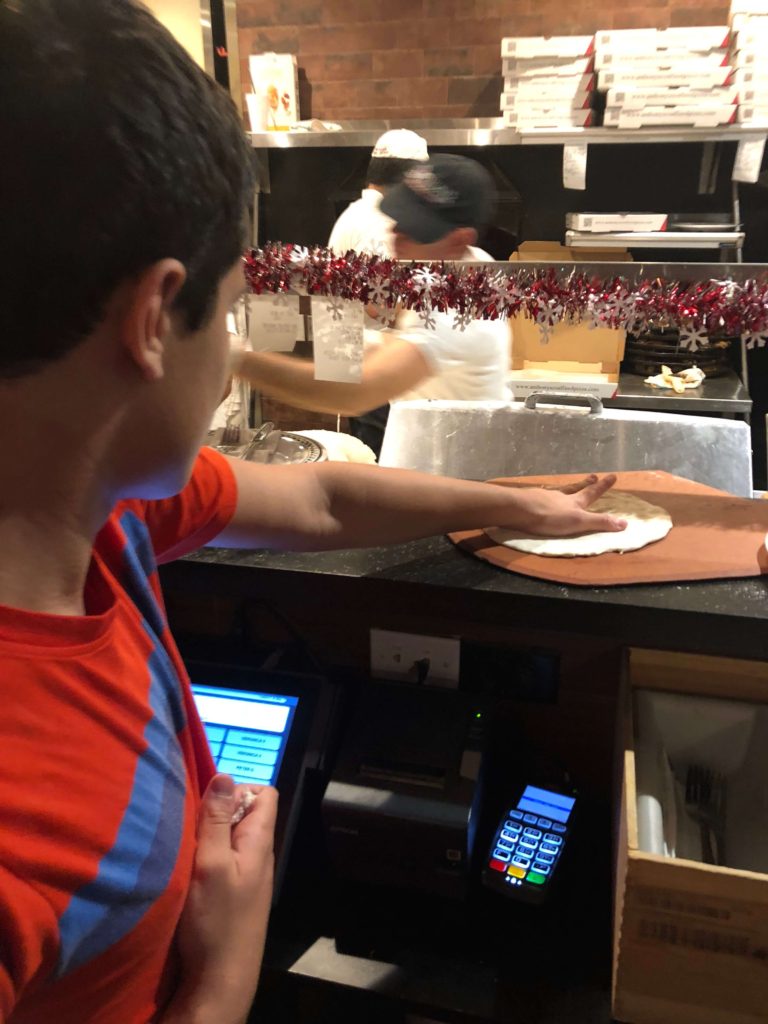 “Here, for you,” one of the guys said, passing Benjamin a doughy disc.

He helped him shape it and gave him little cups of cheese and sauce, walking him through when and how to add each. It was clear from the natural way he spoke that he understood Benjamin knew how to make a simple pizza, but that he just needed some prompting to stay on task.

It was so nice. Not in the way the message on the blackboard was nice, and not in the charitable, somewhat condescending way most people act when they try to reach out to Benjamin. They usually mean well, of course, but it’s not always easy to know what to do, how to be. This pizza chef did, though. I sort of wanted to hug him.

When the waiter brought out our food he also had Benjamin’s personal-sized pie. It was a little bit different than the other ones. The crust had a thicker, gummier texture and it was very saucy, but it was good. And it looked real, like something they would actually serve.

For a second I imagined Benjamin working there one day, getting paid to make pizzas on the other side of the divide. He would love that.