Right and left both get singed at White House Correspondents roast…A comedy roast is supposed to be uncomfortable. So why is Michelle Wolf, hired to do the roast-style speech at the annual White House Correspondents’ Dinner, being criticized for doing her job? Whether you like Wolf’s style or not – and even the GN staff is split on this one – she fulfilled the duties of her post: she called out hypocrisy and bad behavior, and did so sort of mildly, honestly (watch any of the Friars’ Club or Comedy Central Roasts and you’ll see much harsher comedy). Comedian Kathy Griffin, who previously got in trouble exercising her free speech in the direction of POTUS in a photo of questionable taste, had some on-point ideas about why Wolf was being attacked in the media, shared in an A to Z of tweets. Griffin pointed out that Wolf didn’t stick to Trump and Republicans in the skewering. Instead, she took on the media themselves, the very correspondents that cover Trump’s daily outputs.

M) I'll tell you what has the media so upset, because @michelleisawolf told the truth about them last night and the role they played in allowing Trump's rise. They hate to be called out on their bullshit, it's painful..I get it. But she said what needed to be said.

Then she also pointed out that a roastmaster is supposed to make sure everyone gets hit, so no one feels singled out, and that Wolf achieved that.

W. @michelleisawolf did what a good roast master does…she spread the roast around..everyone got hit. That's the way you do it, so people can walk away not feeling like they were targeted, but that the roast master took down the whole room.

That the focus of some of the post-event conversation focused on Wolf’s “attack” of Sarah Huckabee Sanders is actually beyond me. The attacks weren’t about her personal or physical appearance: they were about her work and how she does it, which is precisely what anyone at the WHCD should expect comedic comments about. If anything the comment about using the ashes of the truth to create the perfect smoky eye is both a compliment to her makeup and a criticism of her work. What do you think? Watch Michelle’s entire roast below:

And the merit badge for confusing the American public goes to…The Boy Scouts of America which announced it will admit girls, and is therefore changing the name of its Boy Scouts program to Scouts-BSA. The parent organization is still the Boy Scouts of America, and Cub Scouts program for 7- to 10-year-olds is still the Cub Scouts.  But by 2019, both programs will admit any child in the age group, regardless of gender. There will still be girls- and boys-only spaces: dens will be divided along gender lines. The Boy Scouts previously widened their admission guidelines to include gay and transgender boys and scout leaders. And the Girl Scouts are considering legal action. According to an NBC News report, Girl Scout leaders were “blindsided” by this announcement and are launching new initiatives  “focusing on outdoor activities and on science, engineering, technology and math.” In Refinery29,  Stewart Goodbody, Girl Scouts senior director of communications and external affairs questioned how effective the Boy Scouts’ programming for girls would be, when the Girl Scouts have “been acutely focused on dispelling gender stereotypes and creating a space exclusively for girls to learn and grow — a ‘room of one’s own’ for them, so to speak,” for the last century. Goodbody added that the Girl Scouts “are determined as ever to stay on this path, so that more girls, through Girl Scouting, gain confidence, seek challenges, and become active decision-makers and proficient problem-solvers to the greatest degree possible — and frankly, are better equipped to navigate a world that is still, regrettably, a ‘man’s world.'”

In a statement cited in the Refinery29 piece, Girl Scouts CEO Sylvia Acevedo said “We’re dedicated to building that critical STEM workforce pipeline that businesses and communities across the country are looking for. Girls are our country’s great untapped resource and are the key to our nation’s competitive advantage in the new digital economy we’re living in.”

Long career, long marriage, long life: Handbag designer Judith Leiber, 97, died last Saturday within hours of her husband, who was 96: the pair had been married for 72 years. Leiber founded her own business in 1963 and her purses have been the go-to red carpet handbags for decades. (Learn more about this nonagenarian and her business success in this Harpers Bazaar profile.)

Animal Planet: New roles for barnyard animals. You may have heard about support animals accompanying people on airplanes, or about goats and yoga. How about bringing chickens into nursing homes?

A program called HenPower “creatively hengages”–yes, they said “hengages”–”older people in arts activities and hen-keeping to promote health and wellbeing and reduce loneliness,” according to its website. “HenPower cultivates creativity in care settings at a time in life when most people are slowing down, and not stepping into wellies or making masterpieces.” This program sounds like a great opportunity to improve quality of life for seniors. I look forward to next week, when the mad libs of bringing animals into various spaces continues: I’m totally ready for micropigs at the ballet, lizards at libraries and ferrets in museums.

In case of sexual harassment, consult this poster. The new PSA-style poster from CherryBombe, designed to evoke choking safety posters and the like, breaks down the actions someone can take if they are victims of harassment. You can order or download your own here.

Immaletyoufinish, but I didn’t finish watching all the Kanye clips on the internet yet…This week has been dominated by rapper Kanye West who in recent weeks was seen with a “Make America Great Again” hat and expressed support for the President. Kanye talked with Charlamagne tha God in a nearly 2-hours-long YouTube interview, covering his own mental health and more. During an interview at TMZ, Kanye also said “I love Trump, that’s my boy” and claimed slavery “was a choice,” citing an ongoing “slave mentality.” Van Lathan, a TMZ producer, expressed his disappointment with Kanye’s words, saying that he’s entitled to believe whatever he wants but that “there is real-life consequence” to what he says. Lathan said to Kanye that he has “morphed into something, to me, that’s not real.  You gotta be responsible, man.”

It’s the final countdown! Because in this craptasm of a news space, we delight in some good news, fan favorite Arrested Development is back, with a remixed Season 4 in advance of a future Season 5. Read AD creator Mitch Hurwitz’s statement, released in small print via Twitter.

On the next… Arrested Development pic.twitter.com/NjP26k9KE7

We’re so excited about the return of the Bluth family that we just blue ourselves.

May the 4th Be With You…Always. And of course, today is May 4th, known in certain circles as “May the 4th Be With You,” an opportunity to celebrate the cultural phenomenon known as Star Wars. How to celebrate? Rewatch the movies, buy your ticket for Solo: A Star Wars Story (in US theaters May 25), cosplay your little heart out, re-read classic Grok Nation posts about Star Wars, post pics on socials and hashtag it #Maythe4thBeWithYou….but whatever you do, may you feel the power of the Force, binding humanity and the galaxy together! 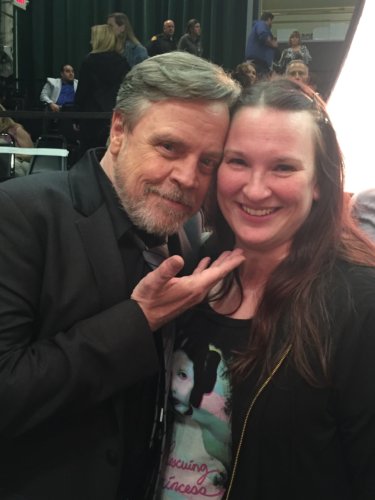