After the shooting at Tree of Life synagogue in Pittsburgh, many around the country felt hopeless and helpless—Jews and allies alike. Many Jewish people look at this massacre and the related rise of anti-Semitism in the U.S., and feel uncertain and scared about publicly celebrating the upcoming holiday of Hanukkah. That is where the newly formed organization We Stand Together comes in. Created in the aftermath of the synagogue shooting, their goal is to provide actionable efforts for those wanting to support marginalized and targeted communities.

Liz Friedman, founder of We Stand Together, recalls being in synagogue in Western Massachusetts when she found out about the Tree of Life shooting. “We started weeping while we prayed,” Friedman says. “And we were trembling. And we held on to each other while the tears streamed down our faces. And we sang. And I thought, how quickly can I throw my daughter down on the floor and throw my body on top of hers. Can I be fast enough to save her life?”

These thoughts and more swirled through Friedman’s head. She was simultaneously afraid to be in synagogue while craving the closeness and safety of being with her community. While she stayed at synagogue for a long time that day, soaking in the solidarity, she started planning for what should come next.

“From my grief, a vision was born,” Friedman says of the birth of We Stand Together. “What we need at this moment is to inspire regular people to take bold stands against hate at levels that we have not seen before. We need everyone of us to say ‘I will not tolerate hate in my home, my community and my country.’ We Stand Together is about building an army of allies who will stand arm in arm and never give up in the fight against hate.”

And, according to Friedman, this pertains to all the various hate crimes and actions occurring in our country: “We need to take even bolder stands against anti-Semitism, Islamophobia, misogyny, racism, transphobia and all other forms of hate that are being fueled by the rise of white supremacist rhetoric. And we must say NO.”

In the aftermath of the shooting, Friedman found that some non-Jewish friends didn’t know how best to support their Jewish friends, family and neighbors. That is why We Stand Together came up with an easy and accessible action that anyone can do.

The Jewish holiday of Hanukkah is December 2-10 and is commemorated by lighting a menorah and displaying it in your window for all eight nights. In solidarity with Jews around the world, allies are encouraged to print a PDF of a menorah (either a black and white or color version) and place it in a visible window for the length of the holiday. 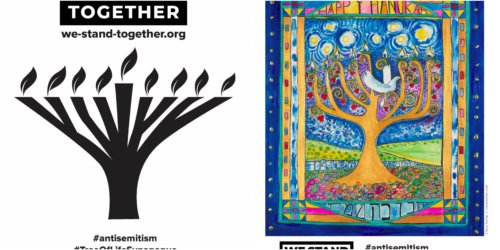 The two different images from We Stand Together, which you can print out and display

Advisory Board Member of We Stand Together and Executive Director of Critical Connections, Mehlaqa Samdani, explains why allyship is more important than ever before. “We believe that all of us must stand together against the forces of hate that have been unleashed in our community and our world,” she states. “While anti-Semitism and racism are nothing new, the current rise of white-supremacist rhetoric is creating a climate where there is greater permission to express hate without fear of consequences. This is dangerous for all of us.”

With news stories about hateful and violent attacks feeling like a daily occurrence, it can easily seem hopeless and as if nothing you can do will be enough. But Friedman encourages us to  practice being brave.

“Courage is a muscle,” Friedman explains. “Each one of us can, and must, become even more courageous. This fight we are in is not a practice round. This is the real thing.”

To learn more about this action and future ones, visit We Stand Together.