There was a story in the news about the FDA loosening the regulations surrounding the administration of what we used to call RU-486 but is now known as mifepristone.

For clarification purposes, mifepristone is not “the morning-after pill.” The morning-after pill (an emergency form of contraception sometimes called Plan B) is a pill that can be taken the morning after having unprotected sex or sex where you think you might get pregnant; it prevents the developing fetus from implanting onto the uterine wall. (For point of reference and speaking as a scientist, I want to add that by the point the developing fetus implants on the uterine wall, the male DNA and the female DNA have already combined and started replicating DNA to start making the structures which will make up the brain and spinal cord.)

The basic gist of the article I read was that previous regulations on the administration of this drug involved two, sometimes three, visits to a facility – these requirements would make it difficult for certain populations of women to be able to make happen. Pro-choice advocates accused the FDA of effectively making it extremely difficult for women to have access to this abortion pill.

As some of you know, I’m a bleeding-heart liberal on some issues, and fairly conservative on others.

The social conservative in me was instantly concerned that the loosening of regulations might make it seem like the decision to terminate a fetus is not a big one. Meaning, people might start to think, “it’s not big deal, I’ll just go down to the clinic and they’ll give me this pill, no biggie, I’ll go home and I’ll be fine.” Women are often not fully educated about how developed a fetus is at the time when they decide to terminate a pregnancy. Many women report that if they had been told what the fetus looked like at two or three or four or five or even six months, they might have decided differently about getting an abortion. Honestly, that worries me. You don’t have to have a baby if you don’t want to, but a lot of women report that had they known how developed the fetus was, they might have committed to carrying the baby to term and putting it up for adoption. I think that’s an option that should also be presented to those who are in this situation and considering their choices.

The true liberal in me feels relieved that women in populations where it might be difficult to get adequate healthcare might now, because of the loosening of these regulations, be better able to have control over their bodies by having easier access to mifepristone.

I believe I can be liberal in supporting a woman’s right to choose, but also conservative in making sure that we protect women from making a difficult decision too easily, without giving it the proper consideration or thought.

And then I read what Donald Trump said: that women who get illegal abortions should be punished and that if he became president, he would want to make abortion illegal. (Exact quotes: “you have to ban it,” and “there has to be some sort of punishment.” See here for clip from CNN and here for clip from NBC News.)

And I posted that article on Facebook with the text, “enough is enough.”

Because enough is enough.

Even this morning, when Trump backpedaled on his statements (see graphic below), enough is enough. 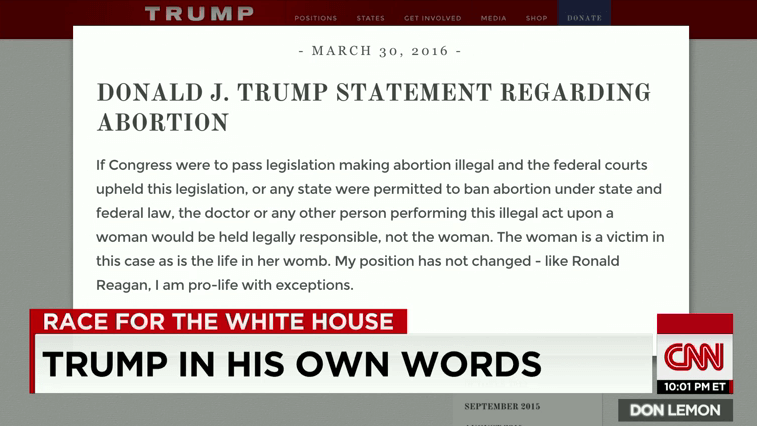 What I do not understand is supporting a man who believes in restricting the freedom and movements of an entire section of people because they are Muslim or Mexican or any other specific population of this country of immigrants. Kindly remember, folks: I am a second-generation American who lost huge chunks of my family in the Holocaust and whose grandparents fled a continent and a world that had restricted their freedom and movement, and ultimately, their very existence.

And what I do not understand is supporting a man who believes in restricting my rights to do whatever it is I want to with my body.

Point 3: You cannot force me to carry a baby in my body because you don’t like something I did. Sorry, people. There’s no other way to think about it.

I know people who have had abortions and, for them, it was the best decision they could make given their situation. I know people who have had trouble getting pregnant because of the scarring from abortions. I know people who feel tremendously affected in a very significant way by their decision to terminate a pregnancy. This is one of the most complicated issues in our country and whenever people ask me what I would be willing to fight for more than any other cause, this is it: that women should always have the right to determine what happens to our own bodies.

I respect the right of other people to have opinions even if I don’t agree with them. I respect the right of other people to think I am a horrible person because I support a women’s right to an abortion. What I do not respect is other people challenging my authority over my uterus and my life. Trump cultivates extremist views, not just about Muslims or Mexicans, but also about women, restricting our movements and our agency over our own bodies. And I cannot tolerate it.

I have heard from a lot of Republicans who have said that Donald Trump does not speak for them, especially on this issue. I commend Republicans for standing up and being brave. And I commend the generations of women who have laid down their lives to protect the rights of women. I join those women and I join with all Americans, those who support abortion and those who don’t, in saying, when it comes to outrageous, misogynistic and extremist comments from Donald Trump about women, enough is enough.